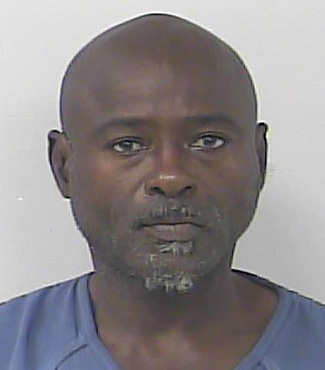 four crack cocaine rocks to a Florida undercover agent, according to an arrest affidavit.

Terry Leon Simmons, 53, was arrested Friday afternoon at his home in Fort Pierce on a felony cocaine sales charge. He was also hit with a second felony count after arresting officers spotted a marijuana joint and a bag of MDMA in plain view inside the residence.

Cops charge that Simmons sold crack cocaine to a driver who pulled up outside of a convenience store a couple of blocks from the ex-con’s apartment.

At the time of the $40 transaction, Simmons was wearing a “two toned blue shirt with red lettering on the front that said ‘COKE’ on the front.” The affidavit does not indicate whether the lettering was in the style of the popular soft drink.

Seen above, Simmons is being held in the St. Lucie County jail in lieu of $55,000 bond.

According to court and prison records, Simmons has repeatedly been convicted of possessing, purchasing, and selling cocaine. Since 1991, Simmons has spent a total of nearly 17 years in Florida prisons (in addition to significant time spent in county jails). He was most recently released from the state system in February, after spending more than three years in custody for cocaine possession and tampering with evidence.