Traders on the floor of the New York Stock Exchange.

The next big test for the stock market will be whether the major indexes can break through all-time highs, just a short distance away.

Stocks have rallied on expectations that the Fed should be cutting interest rates in the near future, and that President Donald Trump would stand down from his threat to put tariffs on Mexico, as he did on Friday. The Dow Jones Industrial Average and S&P 500 are both up more about 5% in June. The Dow is up for six-straight days and futures pointed to another big gain Tuesday.

“I think it goes back to its highs. This would be a pretty quick recovery from a pullback. Normally, it takes about a month and a half to get back to breakeven. This could happen in less than half a month,” said Sam Stovall, chief investment strategist at CFRA.

Stovall said weak May markets usually lead to a boom in June. The S&P lost 6.6% in May. Going back to World War II, whenever there was a strong start to the year, the market traditionally fell in May but rose in June, and this year was very strong through April.

Stocks started out higher Tuesday morning but gave up gains and were slightly lower Tuesday afternoon. The S&P 500 was 2.3% away from its all-time high of 2,954 through Monday’s close while the Dow was 3.3% from its high and Nasdaq was 4% from its record. 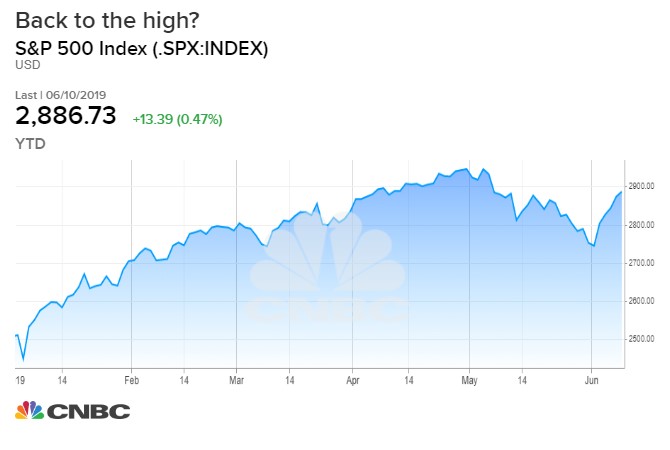 “I think the market’s feeling like there really is nothing to be worried about,” Stovall said. “I think that’s because of the lower rates that will help pull the economy out of its death spiral.”

Ari Wald, technical analyst at Oppenheimer, said the market is poised to move higher, and the fall in bond yields that spooked stocks was overdone.

“We’re making the case that the S&P 500, with the snap back, is still in a position to surprise higher. We’re seeing a lot of similarities to the summer of 2016. … After a really strong run-up into the second quarter, the market just spent a few months backing and filling into the summer headwinds, before heading higher,” he said.

Julian Emanuel, head of equity and derivatives at BTIG, says the market may actually have trouble breaking to the next level, though the S&P should end the year at 3,000.

Emanuel said other hurdles remain for the stock market, including the unresolved China tariffs, which are a bigger threat than Mexico was in terms of the economic impact. He also said there is an increasing potential for a hard Brexit as Britain leaves the European Union. He said that could be a negative for risk assets.

While he ultimately expects President Donald Trump to strike a trade deal with China, the trade war between the two could make for a bumpy ride for stocks. Emanuel also said investors are putting too much faith in the Federal Reserve.

“The market has completely overestimated the Fed’s propensity to cut rates,” Emanuel said. “Friday’s [jobs report] was a weak number, but we’ve had a number of those over the years, and the Fed hasn’t reacted.” The government on Friday reported that only 75,000 nonfarm payrolls were created in May, about 100,000 less than expected.

Economists in the last several weeks changed their forecasts to now expect as many as two Fed rate cuts before the end of the year. Even though the threat of tariffs on Mexico was one reason for the lower interest rates forecasts, Fed watchers continued to call for two rate cuts Monday, based on a weakening U.S. economy.

“There are people who are talking about three or four rate cuts in 2019. That’s not going to happen,” Emanuel said. “The market has to work off a little bit of that rate-cut exuberance. That puts a ceiling on stocks. Conversely, the fact the Fed is prepared to act and the fact the market responded favorably to the outcome with Mexico tells you there is a floor under stocks as well,” Emanuel said. “The market needs to range trade for a while, as it waits to get more information on China.”

‘It’s not fit for humanity’…