BREAKING NEWS: Trump says ‘Joe Biden is a dummy!’ and unleashes fury at Democratic front-runner he says is ‘the weakest mentally’ in the field as he leaves Washington for Iowa showdown

Trump slapped back and Biden in a dramatic fashion on Tuesday as he left the White House in response to the former vice president’s claim that the Republican president is an ‘existential threat’ to democracy in prepared remarks the Democrat’s campaign released early.

‘When a man has to mention my name 76 times in a speech, he’s in trouble. Now, I have to tell you, he’s a different guy.  He looks different than he used to, he acts different then he used to. He’s even slower than he used to be. So I don’t know,’ the U.S. president said. ‘But when he mentions my name that many times I guess I should be complimented.’ 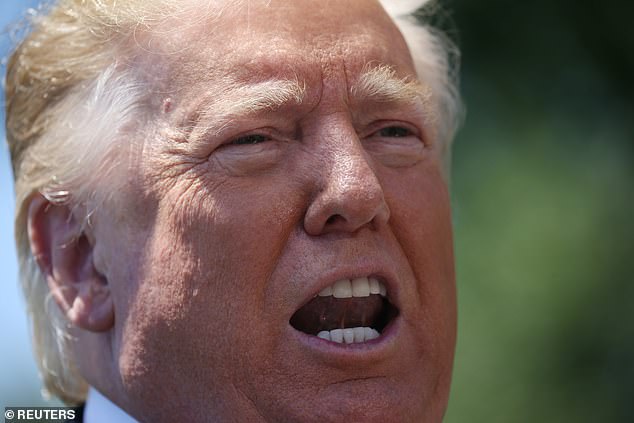 He told reporters in winding remarks on the South Lawn that Biden is a ‘dummy’ and a ‘loser’ who’s ‘weak mentally,’ which will make him easy to beat.

‘I like running against people that are weak mentally,’ he told reporters at a Marine One departure. ‘I think Joe is the weakest up here.’

The president insisted he’d win Iowa in the general election – a state both men are campaigning in today – despite internal polling that shows him losing the farming state.

‘Joe Biden thought that China was not a competitor of ours. Joe Biden is a dummy,’ he said. ‘China is a competitor.’

As Biden prepared to unleash his fury on Trump, the president beat him to the punch. ‘Well, I heard Biden, who’s a loser – look, Joe never got more than 1 per cent except Obama took him off the trash heap and now it looks like he’s failing,’ the president said.

‘It looks like his friends from the left are going to overtake him pretty soon, but I heard, you know, his whole campaign is to hit Trump,’ he added, in a nod to Elizabeth Warren’s rising poll numbers.

Trump’s own poll numbers have been struggling compared to Biden’s in a general election scenario in critical states.

The New York Times reported Monday that Trump instructed aides to deny he performed poorly in campaign surveys of swing states. A senior campaign official told DailyMail.com that staffers have never been asked to lie.

And the president denied that he’d been untruthful about his level of support.

‘I never do. My poll numbers are great. The amazing thing is all I do is get hit by this phony witch hunt,’ he said.

The president insisted they are ‘fake polls,’ and he’s doing just fine in states likes Iowa, Pennsylvania and Texas. He said he’d prefer to run against Biden than anyone else in the large field of Democrats.

‘No, I would rather run against, I think, Biden than anybody. I think he’s the weakest mentally, and I like running against people that are weak mentally. I think Joe is the weakest up here. The other ones have much more energy,’ he said. ‘I don’t agree with their policies, but I think Joe is a man who would – I call him 1 percent Joe because until Obama came along he didn’t do very well. But look, look – but I don’t bring him up.’

Why fewer states than ever could pick next president…