President Trump is making a 2020 prediction about who his opponent will be in the race to come. Veuer’s Nick Cardona has that story.
Buzz60

President Trump and former Vice President Joe Biden head to Iowa Tuesday, marking the first time during the 2020 election cycle that the two will campaign in the same state on the same day.

As the two make their cases to Iowans, there’s renewed attention on whether a septuagenarian candidate can persuade skeptical 2020 voters that he or she can demonstrate the vigor and vision needed to lead the nation.

Forty-six percent of voters planning to attend Iowa’s Democratic caucuses said it would be a disadvantage for a candidate to be older than 70, while 50% say it would make no difference, according to a Des Moines Register/CNN/Mediacom poll published Saturday. Three percent said they are unsure and 1% said it would be an advantage.

The response from likely caucusgoers is one that could be concerning not just to Biden, the 76-year-old Democratic frontrunner, and the 72-year old Trump, but also to two other top Democratic contenders: Sen. Bernie Sanders is 77; Sen. Elizabeth Warren soon turns 70.

“The age thing is going to be a factor,” said Bryce Smith, 27, the Dallas County, Iowa, Democratic Party chairman. “It’s going to be a top consideration for voters who are asking themselves, ‘Where do we see this country going six years or eight years from now?’ ” 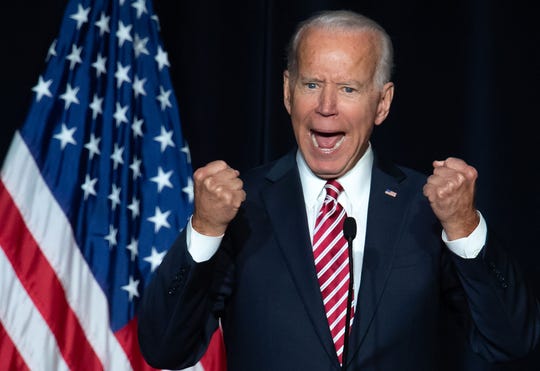 In this file photo taken on March 16, 2019, former US Vice President Joe Biden speaks during the First State Democratic Dinner in Dover, Delaware. – Joe Biden raked in $6.3 million in the 24 hours since launching his presidential bid, his campaign said April 26, 2019, outpacing Day 1 fundraising of all other Democrats in the crowded 2020 field. Online donations to the former vice president, already considered the frontrunner among the Democrats seeking to challenge President Donald Trump, averaged $41, and 61 percent of total money raised came from new donors who were not on earlier Biden email lists. (Photo: SAUL LOEB, AFP/Getty Images)

Both the Trump and Biden campaigns declined to comment on the impact of the issue of candidates’ ages – an issue likely to remain at the forefront of voters’ minds as they evaluate more than two dozen candidates vying for the White House – is having on the race thus far.

Too old for president? Joe Biden, 76, says he has no plans to limit himself to one-term in the White House

Biden is scheduled to hold events in Clinton, Davenport, Mt. Pleasant, and Ottumwa during his Iowa visit Tuesday and Wednesday, a whirlwind trip that has him scheduled to stump through a wide swath of the state over roughly 24 hours.

Trump is scheduled to attend a GOP fundraiser in West Des Moines and visit an ethanol plant in Council Bluffs during his visit. The president is expected to tout his administration’s new E15 gasoline rule for ethanol, a policy change that is viewed as a boon for Iowa’s farmers since it allows year-round use of the corn-based fuel. He’ll be joined by Rep. Cindy Axne, a freshman Democrat who represents Iowa’s 3rd District, on the plant tour.

President Donald Trump has called off plans to place tariffs on Mexico.
Buzz60

Biden and Trump, who turns 73 on Friday, have already squabbled about age in the early going of the campaign.

Trump, who has faced criticism from liberal commentators for his work ethic, has taunted Biden giving him the nickname “Sleepy Joe.” On the day Biden officially entered the race, Trump declared himself “a young, vibrant man,” offering reporters a glowing self-assessment while knocking the former vice president.

“If he looks young and vibrant compared to me, I should probably go home,” Biden responded.

Biden said in his first television interview after entering the race that it was legitimate for voters to question whether he had the stamina required for the job. He urged voters to watch him closely on the trail and make a judgement on whether he showed the “energy and capacity” for the job.

Thank you! You’re almost signed up for

Keep an eye out for an email to confirm your newsletter registration.

Biden has held fewer public campaign events than each of the seven candidates immediately trailing him in national and early-voting state polls since entering the race, according to a USA TODAY analysis of the candidates’ public schedules.

The former vice president entered the race about 47 days ago, officially launching later than the rest of the other top contenders. In their first seven weeks in the race, Booker, Sanders and O’Rourke held more public campaign events than Biden, while Buttigieg, Harris, Klobuchar and Warren held fewer events.

The former vice president also managed to make it to each of the early voting states– Iowa, New Hampshire, Nevada and South Carolina – within 18 days of the campaign launch.

Former Rep. Beto O’Rourke, 46, who managed to campaign in each of the first four states within nine days of his launch, is the only top tier candidate in the national polls to move more quickly than Biden. The former vice president has also released two major policy proposals since entering the race, one detailing his plan to bolster education funding and another on climate policy.

This past weekend Biden opted to skip Iowa Democrats’ annual Hall of Fame Dinner in Cedar Rapids, a cattle call that drew 19 of the 23 major Democratic presidential candidates. He instead decided to stay in Washington to celebrate some family milestones.

And the weekend before that, Biden faced criticism from some California Democrats and other White House hopefuls for skipping the state party’s annual convention. With 495 delegates, California is the biggest electoral prize of the presidential contest. Biden instead delivered a speech at a Human Rights Campaign event in Ohio, while other Democrats addressed the convention and pitched voters on the sidelines of the main event.

He pushed back against the criticism during remarks at a fundraiser Monday.

“One of my competitors criticized me for not going to Iowa to talk for five minutes,” Biden said. “My granddaughter was graduating. It was my daughter’s birthday. I would skip inauguration for that.”

Smith, the Dallas County Democratic Party chairman, said that he has heard from some residents in his Iowa county who want to see more of Biden as well as some other candidates. He noted Biden still has plenty of time to make up for that craved direct contact.

“Voters, especially in Iowa, understand that these candidates are human, have lives and can’t be here 24/7,” Smith said. “But it really makes a difference when you are coming two or three or possibly four times a month and doing full days of campaigning.”

Biden’s Democratic rivals have also sought to contrast themselves from the former vice president by arguing that his center-left ideology is a relic of today’s party.

But some have also taken not-so-subtle digs at Biden while highlighting their own vigor.

Warren noted in her address to the Hall of Fame Dinner Sunday that she’s already visited 20 states and Puerto Rico and has taken nearly 30,000 photos with participants who have flocked to dozens of town halls. 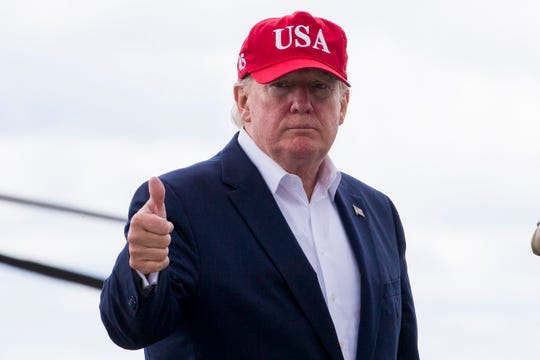 While Trump claims certainty of superior virility, his more than two years  in the White House offers a more mixed record.

A review of Trump’s daily schedule for this year shows that, on days when he’s in the White House, he seldom has briefings or meetings or holds public events before 10:30 or 11 a.m. The early morning hours of his calendar are often listed as “executive time” – the period when he reportedly tweets, makes phone calls or watches television.

Yet, by saturating the media with frequent public events and his tweets, “most Americans see that Trump is present in their daily lives and probably believe that he’s on top of things,” said Ron Bonjean, a GOP strategist with close ties to Republicans on Capitol Hill.

“What happens behind the scenes isn’t really on their minds,” Bonjean said.

As vice president, Biden also has lived through the intensity of a presidential campaign and the demands of working in the White House.

But, “I think we have to wait and see on what (Biden’s) stamina looks like on the campaign trail,” Bonjean said. “He’s grown a little older. I think the jury is out on that right now.”

With their same day visit in Iowa, voters across the country will get side-by-side images of these two 70-somethings in action.

Some Iowa Democrats said they have already concluded it’s time to move on from the Silent Generation and Baby Boomers, and hand the baton to younger candidates.

Doug Fitzgerald, 66, of Rockwell City, Iowa, supported Sanders in 2016, but said he wants to see a younger Democratic challenger take on Trump this time.

“Honestly, since Trump took office, I’ve just kind of hated all old white men – and that includes Bernie and Joe Biden and any of the other old white men candidates,” he said.

Ukraine Urges Citizens to Flee Ahead of Expected Assault in East…