Iranian-Americans March in D.C., Call for Regime Change in Iran

Thousands of Iranian-Americans took to the streets of Washington, DC, on Friday to march and voice their support for those seeking regime change in Iran, an issue that past presidential administrations have seemed to avoid.

The bi-partisan Free Iran Rally, which began at the U.S. State Department and concluded outside of the White House, was run by the Organization of Iranian American Communities – USA and featured many prominent political voices.

The rally attendees were also addressed by a pre-recorded message from Maryam Rajavi, the president-elect of the National Council of Resistance to Iran. 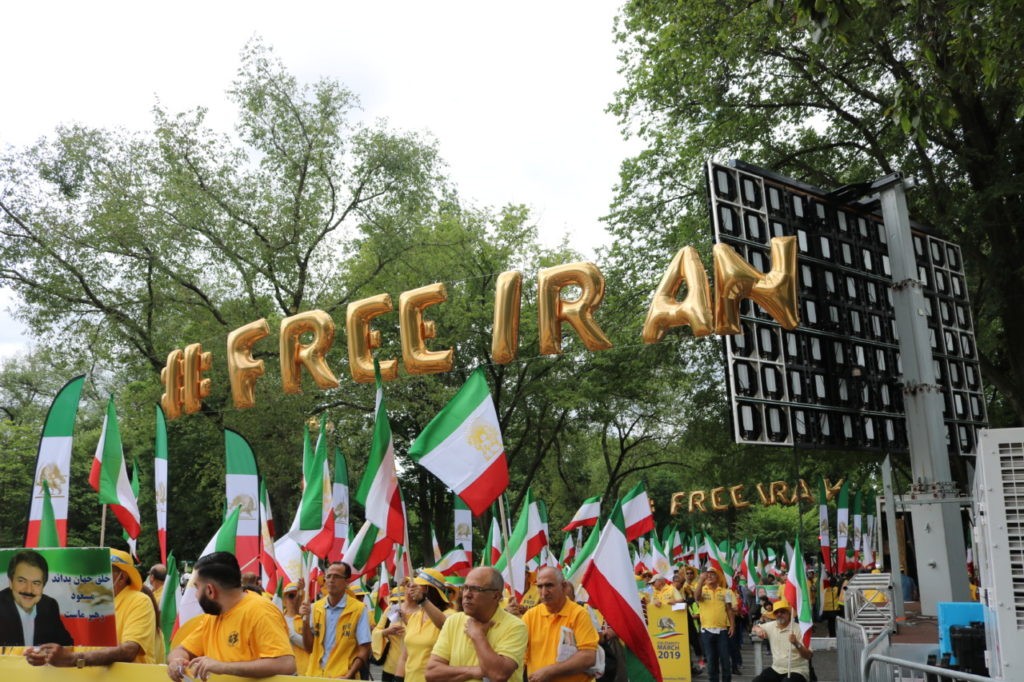 “When the mullahs are not held accountable and do not pay a price for their actions, they become more emboldened and intensify their belligerence,” Rajavi stated in her address. “Launching Katyusha missiles in Mosul and Basra and the missile attack against a U.S. drone are very telling examples of this fact.”

As he took to the stage, Gen. Keane commended the Trump administration’s ability to “put Iran on notice.”

“2018 was a major turning point for Iran. The U.S. pulled out of the nuclear deal and for the first time in 39 years, put Iran on notice,” Keane stated as he addressed the crowd. “Using proxies must stop. Building ballistic missiles must stop. Spreading terrorism must stop. And you must stop repressing your people.” 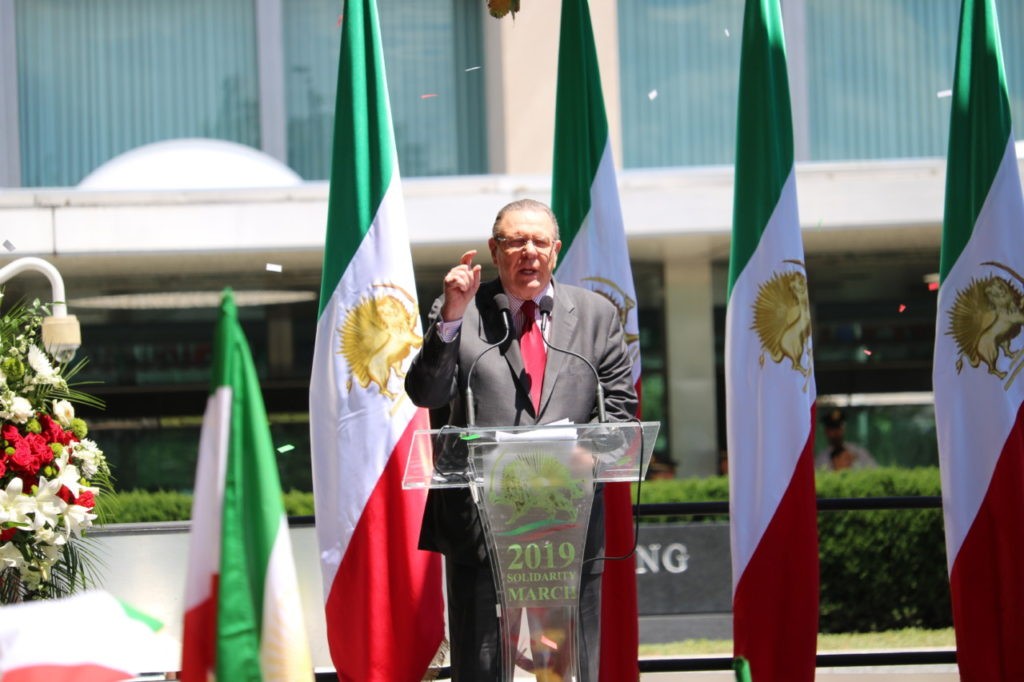 “The U.S. has imposed the toughest sanctions against the Iranian regime in 39 years,” Keane continued. “The U.S. designated the IRGC as a terrorist organization … Iran’s economy is in recession. The currency is devaluing. Unemployment is skyrocketing. There’s a food shortage. And the people of Iran are correctly blaming the mullahs.”

He added, “There has never been a time when an American president has been so committed to fundamental change in Iran.”

Keane went on to list some of the regime’s terroristic behavior towards U.S. troops in the Middle East.

Both United States Reps. McClintock and Sherman offered their support for regime change in Iran.

“As the tyranny of the mullahs has become more extreme, the international resistance has become more resolute,” McClintock said. “Iran has been oppressed and plundered by a gang of thugs who have appointed themselves as the rulers of the country. Their claim to power is illegitimate and their time is approaching. Their desperation is showing at home and abroad.”

Sherman stated that the fight for regime change would be a chapter “written by Iranians.”

“We stand in solidarity with brave Iranians who are fighting for a new chapter in the history of this great nation. This chapter will be written by Iranians,” Sherman explained. “This regime may be on its last legs. It is acting with desperation to distract people from its corruption.” 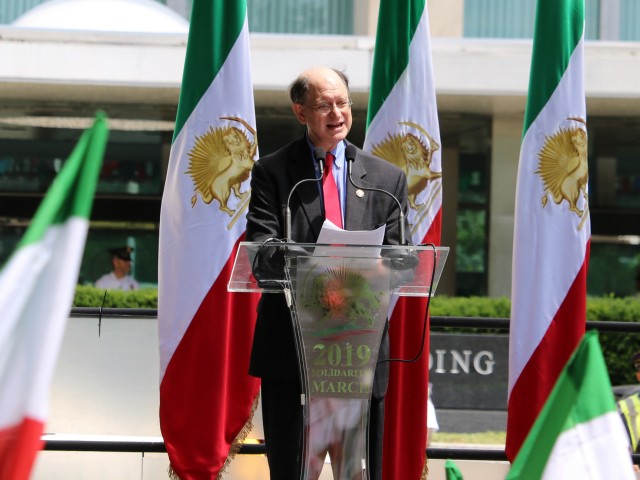 “Terrorists don’t reform,” Torricelli stated firmly. “The reality is the mullahs will never change, they will develop nuclear weapons, they will spread terror. We need regime change and we need it now.”

Former Gov. Bill Richardson commended the organizations fighting for regime change and highlighted the struggles they face around the world.

“We need a new regime, and that regime is you, the MEK, the NCRI, the alternative,” Richardson said. “It’s a strong organization, with a lot of confidence and commitment and leadership abilities.”

He added, “You take risks. The MEK takes risks, being targeted in Europe, in America, for freedom, for democracy.”

Amir Emadi of @OrgIAC: “@Maryam_Rajavi and the NCRI have demonstrated leadership, a significant network and the organizational capabilities to #FreeIran. We support Mrs. Maryam Rajavi in her 10-point plan for a free, democratic and non-nuclear Iran.” #March4RegimeChangeByIranians pic.twitter.com/SYtWRYbrXh

Also in attendance for the rally were Iranian-American youth, who showed their support for the Mujahedin Khalq (MEK).

Days after the corrupt Regime in Iran shot down a US drone,

Attendees at a march in Washington, D.C., organized by @OrgIAC, are demanding Regime Change ⬇️ pic.twitter.com/hHwqXANoNf

In an interview with Breitbart News, Delaram Ahmady, a young Iranian-American whose father was imprisoned in Iran for seven years due to his support for the MEK, discussed how regime change is need.

After her father was released from prison, Ahmady says her father faced “constant harassment,” and he eventually decided to move his family to America.

Ahmady, who considers herself “lucky” to have escaped from the regime, also discussed the recent executions of her father’s cellmates and said she has a “responsibility” to “show solidarity with the people of Iran.”

“The chances of regime change, I think, are definitely growing as the years go on,” Ahmady said in regards to Iran. “The youth are becoming more empowered, they’re becoming more organized.”

After the speeches concluded, the Iranian-Americans in attendance began their march to the White House. Along the path, chants of “Down with terrorist regime in Iran” and “Rajavi yes, mullahs no; they are terrorists, they must go” could be heard ringing from the streets.

Chants by Iranian-Americans at the #March4RegimeChangeByIranians:
“Down with terrorist regime in Iran”
“Regime change in Iran”
“Democracy, freedom, with Maryam Rajavi”
“Rajavi yes, mullahs no; they are terrorists, they must go”#FreeIran #IStandWithMaryamRajavi pic.twitter.com/J4VfbtVHyj

Powerful signage at the event included phrases like “STOP Executions in Iran” and “Designate Iran’s Ministry of Intelligence as a Foreign Terrorist Organization.” 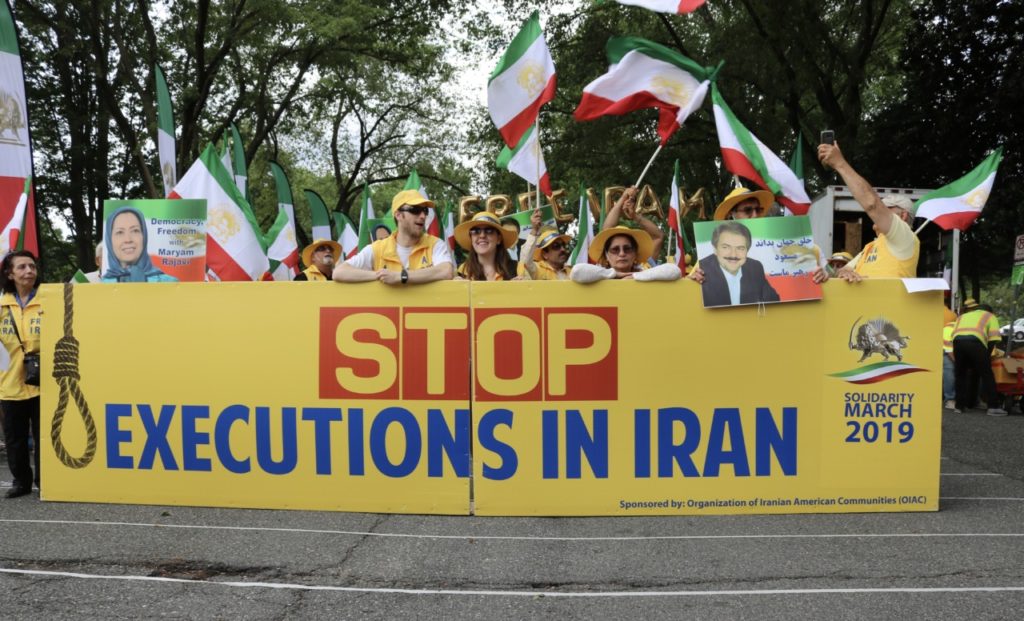 Wrongful executions, which have drastically grown over the years, have been a focal point for many of those seeking regime change in Iran.