AFP Mexico reports that the Mexican National Guard deployed in Chihuahua stopped a group of Central American migrants from crossing the border into the U.S.

A tweeted message from AFP Mexico shows a pair of what is reported to be members of the Mexican National guard stopping a Central American migrant family from crossing the border at Rio Bravo in Ciudad Juarez.

The tweet comes on the same day that the Washington Post reported that the Mexican government announced the completion of its deployment of 6,000 National Guard troops. These troops are deployed in southern Mexico to attempt to disrupt the human smuggling caravans entering Mexico from Central America.

On Friday, National Guard troops in Mexico stopped more than 20 migrants from Pakistan, India, and Bangladesh on the outskirts of Tapachula, the newspaper reported. 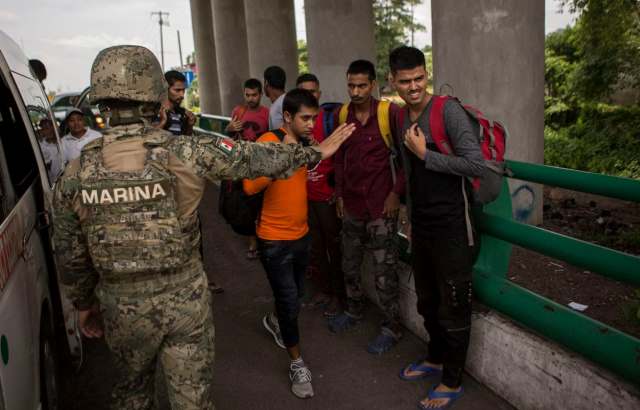 A Mexican Marine orders a group of migrants from Bangladesh, India and Pakistan to step back, at an immigration checkpoint known as Viva Mexico, near Tapachula, Mexico, Friday, June 21, 2019. (AP Photo/Oliver de Ros)

Breitbart News reported on June 19 that Mexico would deploy 6,500 National Guard troops to its southern region and an additional 2,000 guardsmen to the U.S.-Mexico border. It appears the troops in Chihuahua could be part of that deployment.

National Institute of Migration (INM) Commissioner Francisco Garduño Yáñez said the guardsmen will “invite the migrants to return to their countries of origin with assistance from the government.”

If the tweet above is accurate, it appears the guardsmen will also help stop the flow of migrants into the U.S. at Mexico’s northern border.

For those who do not wish to return home, the commissioner said, “We will see what conditions they are in and see if the law allows them to stay. Otherwise, they will be deported.”

Breitbart News reached out to El Paso Sector Border Patrol officials for comment about the Mexican National Guard assisting on the U.S.-Mexico border. An immediate response was not available.

Elon Musk Wants Brands to Pay the Freight on Twitter with $1,000 Monthly Charge