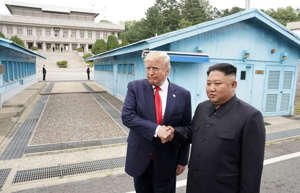 President Donald Trump smashed that precedent on Sunday, meeting Kim Jong Un for the third time after a last-minute Twitter invitation that even surprised the North Korean leader. Trump then became the first sitting U.S. president to enter the isolated country, walking a dozen feet across the demarcation line in the DMZ.

“Stepping across that line was a great honor,” Trump said. He showered praise on Kim and invited him to visit the White House during an encounter that lasted a little more than an hour.

Yet throughout the history-making moment, Trump had something on his mind — critics who say his overtures to Kim haven’t led to any meaningful moves toward ending North Korea’s nuclear program. Nearly every time Trump appeared before cameras, including at the DMZ lookout point, he complained that he hadn’t received sufficient credit for defusing tensions on the Korean Peninsula.

“There was conflict here prior to our meeting in Singapore,” Trump said of his first meeting with Kim last year. He repeatedly lashed out at Barack Obama, at one point saying that the former president had sought meetings with Kim but was rejected — a claim refuted by Obama’s deputy national security adviser, Ben Rhodes.

The biggest takeaway from the impromptu DMZ meeting was simply an agreement to restart talks that have gone nowhere since Trump walked out of a February summit with Kim in Hanoi. That meeting collapsed after Trump refused Kim’s demand for sanctions relief in exchange for only dismantling North Korea’s main nuclear complex at Yongbyon.

While restarting talks is an accomplishment, one senior administration official said North Korea still hasn’t even articulated what it believes “denuclearization” would mean. The official said the country’s negotiators didn’t seem to be authorized to discuss nuclear weapons in meetings. 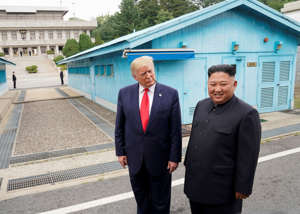 The next round of talks “will go nowhere if North Korea comes back with the same position,” said Chun Yung-Woo, South Korea’s former chief nuclear negotiator with North Korea. North Korea has continued to “relentlessly” build its nuclear arsenal, he said.

“As a whole, it was more of showbiz and optics rather than serious diplomacy,” Chun said of the surprise DMZ summit. “I will judge the outcome on the basis of how the meeting translates into North Korea’s freeze of fissile material production and reduction in nuclear capabilities.”

Trump said that sanctions would remain on North Korea, though he indicated he may ease them at some point in negotiations. South Korean President Moon Jae-in, who joined part of the talks, sought to propose a way forward in suggesting that Kim could get sanctions relief after “sincerely, completely” dismantles Yongbyon.

So far, Kim has held out for better terms. He’s offered no indication he’ll relinquish North Korea’s nuclear weapons, which the regime views as essential to its survival, and has given the U.S. a year-end deadline to come up with a better offer.

Absent progress toward a deal, Trump’s repeated meetings with Kim meanwhile serve to burnish the dictator’s reputation. Analysts say the president risks creating the impression that the U.S. has accepted North Korea’s de facto status as a nuclear-weapons state.

Trump’s embrace of Kim has prompted other world leaders to follow suit: Xi Jinping earlier in June promised a “new chapter” in relations while becoming the first Chinese leader in 14 years to visit North Korea. As the regime’s largest trading partner, China is crucial for enforcing the U.S.-backed sanctions.

Kim faces some political pressure of his own. He has come away empty-handed after meeting Trump twice in the hope of winning relief from punishing international sanctions.

“At some point, handshakes will have to lead to actual beneficial outcomes to help justify staying on this path and not reverting back to a more militant policy,” said Jenny Town, managing editor of 38 North, a website that provides policy and technical analysis on North Korea.

Trump also had domestic politics on his mind on Sunday, and the day’s events featured the showman-in-chief at his best. The unprecedented meeting shifted the spotlight back to Trump from the Democrats vying to replace him, who had drawn two nights of prime-time television coverage for their first round of debates during the president’s trip to Asia.

South Korea’s Moon called the encounter “a flower of hope for the Korean Peninsula.” Ivanka Trump, who accompanied her father to the DMZ with her husband and fellow presidential adviser Jared Kushner, called the experience “surreal.”

“Theatrics won’t magically solve the serious security issues they are faced with,” said Duyeon Kim, an adjunct senior fellow in Seoul at the Center for a New American Security.

Mintaro Oba, a former U.S. diplomat who worked on Korean Peninsula issues, said that Trump was engaging in “defibrillator diplomacy” that keeps the process alive without “treating the underlying disease.”

“It’s clear the two sides have not yet budged on any of the key substantive problems, like differences over sanctions relief,” Oba said. “If the working-level negotiators don’t have to address those problems, it’s hard to see today’s positive atmosphere between leaders translating into any real results.”

–With assistance from Nick Wadhams, Jennifer Jacobs and Jihye Lee.

To contact the reporters on this story: Margaret Talev in Washington at mtalev@bloomberg.net Herskovitz in Tokyo at jherskovitz@bloomberg.net

To contact the editors responsible for this story: Alex Wayne at awayne3@bloomberg.net, Daniel Ten Kate

OFFICIALS: Third of US should be considering masks…