Police in Hong Kong clashed with thousands of protesters on Monday morning as events marking the anniversary of its handover from the UK to Chinese Communist rule spun out of control.

In chaotic scenes, police used pepper spray and batons to contain protesters outside a venue hosting an annual flag-raising ceremony as others fought to smash their way into the government building.

Around 100 riot police in helmets and carrying batons stood behind the shattered glass as a small group of protesters rammed the windows ahead of a planned rally to mark the former British colony’s 1997 handover.

Monday’s mass unrest is the latest manifestation of growing fears China is stamping down on the city’s freedoms and culture with the help of the finance hub’s tame pro-Beijing leaders.

Although Hong Kong was successfully returned from British to Chinese rule, it is still administered separately under an arrangement known as “one country, two systems”.

The city enjoys rights and liberties unseen on the autocratic mainland, but many residents fear Beijing is already reneging on that 1997 handover deal.

The spark for the current wave of protests was an attempt by chief executive Carrie Lam to pass the Beijing-backed extradition law, which she has now postponed following the huge public backlash. 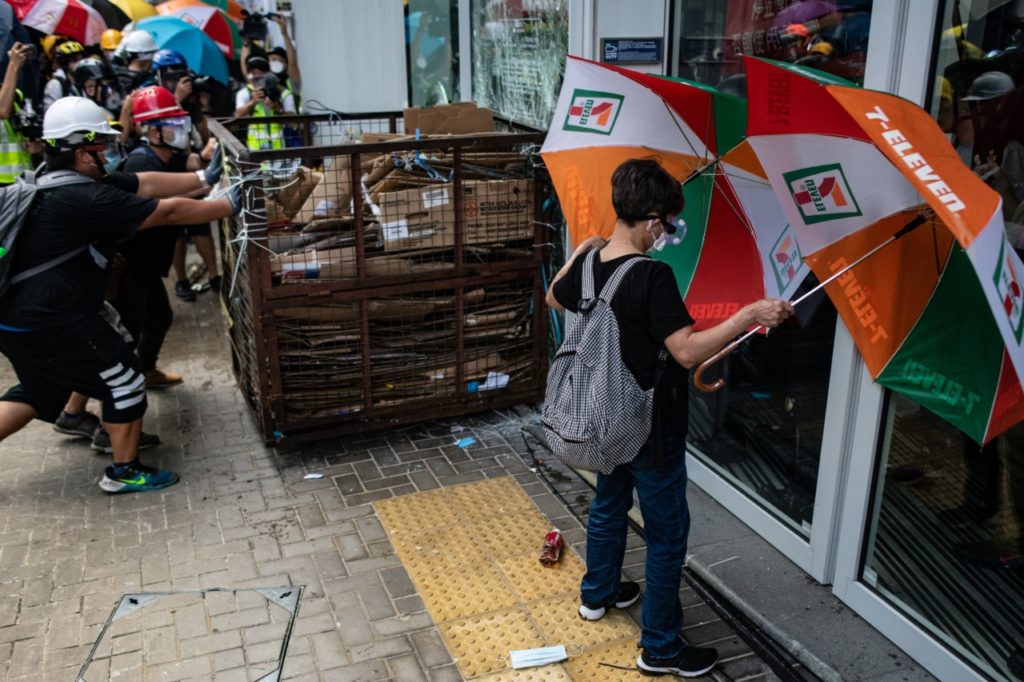 Anti-government protesters trying to ram their way into Hong Kong’s parliament battled police armed with pepper spray on July 1 as the territory marked the anniversary of its handover to China. (PHILIP FONG/AFP/Getty Images)

The proposed Extradition Law would permit Hong Kong’s government to extradite anyone in Hong Kong – citizens, businessmen, and tourists alike – to China, to be tried by Chinese Communist Party (CCP) officials in Beijing courts.

The legislation would also permit mainland Chinese courts to request Hong Kong courts to freeze and confiscate assets related to crimes committed on the mainland and give control of those assets to the CCP in Beijing.

The demonstrations have since morphed into a wider movement against Lam’s administration and Beijing.

AFP contributed to this story Trump Jr. on Pelosi Saying She’s Praying for Trump: ‘I Don’t Think the Party of Infanticide Is Exactly Praying for Anyone’ | Breitbart