An Oregon public library allegedly took down photos from its Flickr account showing children lying on top of a drag queen at a “storytime” event after the images were called out in a report by LifeSite News.

The outlet said the photos showing drag queen Carla Rossi at St. John’s Library in Portland last October and were posted on the Multnomah County Library’s Flickr account. LifeSiteNews added that the photos were taken down after its report ran Monday — but the outlet preserved the images in a link and warned that the images depict “child abuse.”

A Facebook user posted the images in question prior to the LifeSite report and wrote, “I wouldn’t let my kids crawl on top of random strangers no matter how said strangers are dressed.” 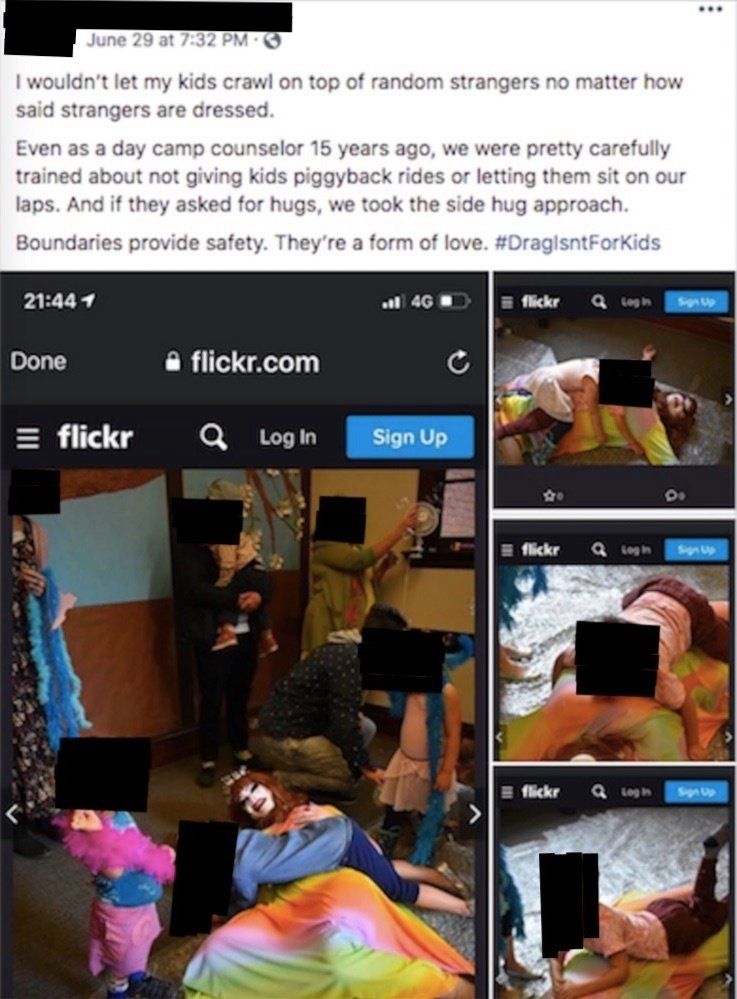 What did the county library have to say?

TheBlaze contacted the Multnomah County Library regarding the LifeSite News assertions, specifically that the photos were on the library’s Flickr account and then were taken down after the outlet’s story ran. Jeremy Graybill, the library’s marketing and online engagement director, offered TheBlaze the following statement Tuesday evening:

Multnomah County Library offers a series of programs called Drag Queen Storytime. These events seek to explore ideas of difference, diversity and inclusion through stories, music and costume. The library serves a diverse population with a broad range of interests, preferences and needs. We strive to reflect our communities’ needs in selecting programs, books and other materials.

We continually review existing policies to ensure that performers meet expectations to provide a safe, welcoming and inclusive environment for all. Presenters and performers are instructed to follow library behavior policies and rules of conduct that protect the interest and safety of presenters, volunteers, staff and library patrons. Parents and caregivers are present at every program.

The library will reflect on the feedback that members of the community have offered. We will consider the views and concerns expressed and work to ensure that Multnomah County Library holds itself to consistently high standards.

LifeSite News pointed to the county library’s schedule of events from last fall heralding the St. John’s Library event featuring Rossi, along with similar storytimes “for kids 2-6 years old with a favorite adult” that featured other drag queens.

“The library is proud to present an hour of kid-friendly drag! Join us for these special storytimes featuring Poison Waters, Carla Rossi, the Sisters of Perpetual Indulgence, and Meesha Perú reading stories about inclusion and diversity,” the announcement says. “The readings will be followed by a craft or dance party. This program encourages kids to look beyond gender stereotypes, and fosters empathy and creativity.”

TheBlaze reported on the Boston version of the Sisters of Perpetual Indulgence two years ago. The group’s website notes that it’s “a modern Order of Nuns. We are a philosophical order, not a religious one. We welcome all to help us do good works regardless of their gender associations, spiritual affiliations, or proclivities. You may be male, female, transgender, gender non-binary, or intersex. You may be straight, gay/lesbian, bisexual, queer, or questioning. You may prefer wearing suits or dresses, leather or lace, or nothing at all. You may enjoy baking or boxing, kitsch or kink.”

Portland’s premier drag clown Carla Rossi (with intellectual support from her human avatar Anthony Hudson) attempts to chart the vast abyss of drag and its potential, addressing how drag’s many varieties, flavors, and houses correspond to the unchartable spectrum of genders and sexuality — with supporting looks at its legendary elders, artists, and ancestors, from Two-Spirits (and other-gender shamans of the pre-settler North American continent) and the Sisters of Perpetual Indulgence to Marsha P. Johnson, Leigh Bowery, Elvira, RuPaul, and Christeene.

Here’s a recent clip of Rossi: