Daniel Weldon is 6-foot-1 and weighs 230 pounds. The 22-year-old also played linebacker for the University of Florida.

One would likely think the last thing on anyone’s mind is picking a fight with him.

But then again, we’re living in particularly strange times — an era marked by basement-dwelling beta males donning masks and hoodies and joining up with Antifa to beat up citizens in the street. Odd that violent leftists rarely practice their craft alone.

As Weldon
tells it, he ventured out to celebrate the Fourth of July with a friend and was wearing a “Make America Great Again” hat — the iconic symbol of President Donald Trump’s 2016 campaign. After he and his friend parted ways, the former football player said trouble found him.

“I’m at Pita Pit, and I get surrounded by like 7 guys and girls,” he wrote on Facebook. “They start yelling at me [because] of what I’m wearing (hat and pin). They were calling me names and saying how awful of a person I was (I’m saying back this is why we’re winning in 2020).”

Given Weldon’s size, that’s nutty enough — but don’t forget the times we’re living in. Because it gets nuttier.

“The 4 or 5 girls start pushing me and punching,” Weldon added. “I’m a former college linebacker, so I can take a hit, and it’s not a big deal, right? But one snatched my hat and tried to throw it away while another ripped my pin and tossed it. The dudes they were with actually ended up deescalating the situation after the girls got violent and pulled them outside. I use the restroom and come back to one of them giving me the bird.” 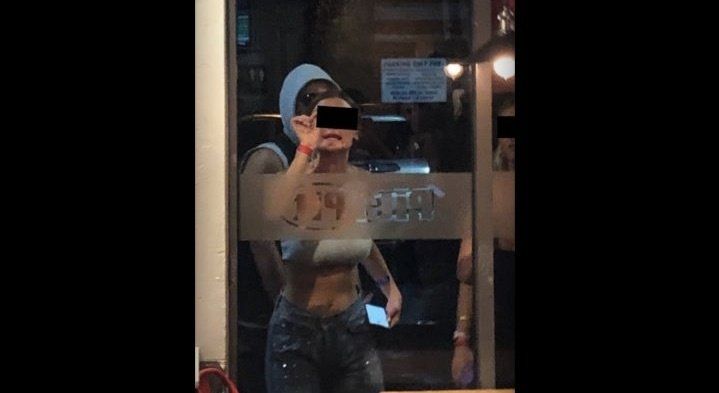 Weldon added that “some libs are violent and will lash out on conservatives at this school. They didn’t know me, but what I wore made them so angry that they attacked me.”

Indeed, the MAGA hat has
become like kryptonite to scads of leftists. TheBlaze has reported on numerous instances in which anti-Trump folks flipped out at MAGA-hat wearers, took off or knocked the caps from their heads, or actually stole them as video recorded the incidents.

Weldon told the College Fix in a Sunday phone interview that the group called him a racist during the incident across the street from the Gainesville campus.

And despite the physical attacks he said he endured, Weldon told the outlet the only thing he did in response was grab his hat so it stayed on his head and pick his pin off the ground.

“My mama raised me right,” he told the College Fix. “I am not going to touch a girl.”

Weldon — who served as chairman of the Florida Federation of College Republicans — added to the outlet that he’s “been doing politics on campus for four years, so it’s not like I am not used to people making comments. I wasn’t physically harmed. I was like, ‘Yo, that was kind of messed up.'”

Initially Weldon told the Fix he didn’t file a police report because he wasn’t hurt. However, since he’s a “big guy” and could handle the situation, he also wondered what might happen if the next person couldn’t stand up for himself or herself, Weldon noted to the outlet.

So he filed a police report Sunday, the Fix said, and provided photos and encouraged officers to obtain video of the incident from Pita Pit cameras and trace their identities through their purchases.

“We are getting to the point where you have to stand up for what you believe,” Weldon added to the outlet. “Some people may think it’s not a big deal, but you can’t go around trying to silence people for their beliefs.”

Brad Barber, assistant director of the University of Florida Police Department, told the Fix Monday that the incident was “located off … campus and is the jurisdictional responsibility of the Gainesville Police Department.” It isn’t clear if Weldon has been in contact with Gainesville police.