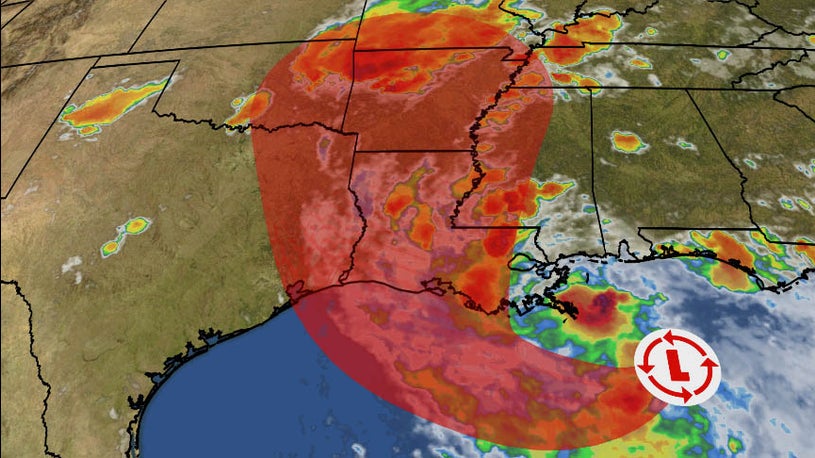 A disturbance in the northern Gulf of Mexico has been named Potential Tropical Cyclone Two by the National Hurricane Center and is forecast to become Tropical Storm and possibly Hurricane Barry as it lashes the northern Gulf Coast this weekend. This system will bring a threat of significant rainfall flooding, storm-surge flooding and high winds to parts of Louisiana, Mississippi, Alabama and East Texas.

The potential tropical cyclone category, which was launched in 2017, allows the NHC to issue forecasts for systems that have yet to develop but pose a threat of bringing tropical-storm-force or hurricane-force winds to land areas within 48 hours. Essentially, it allows watches and/or warnings to be issued with more lead time for systems that may develop quickly.

Hurricane watches are now in effect in southern Louisiana from the mouth of the Mississippi River westward to Cameron, Louisiana. This means hurricane conditions are possible in the area within the next 48 hours.

Storm-surge watches have also been issued for parts of the southeastern and south-central Louisiana coast from the mouth of the Pearl River westward to Intracoastal City, Louisiana. It does not include Lake Pontchartrain. A watch means life-threatening inundation is possible within the area, generally within 48 hours.

The National Weather Service issued a rare flash flood emergency for much of the New Orleans metro area Wednesday morning. Parts of the city picked up over 10 inches of rain in just a few hours, triggering widespread street flooding.

If that wasn’t enough, a tornado was sighted over the western New Orleans metro Wednesday morning.

Here’s Where It’s Headed and How Strong

Once the NHC can find a closed area of low pressure with enough persistent showers and thunderstorms around it, it will upgrade the disturbance to either Tropical Depression Two or Tropical Storm Barry, depending on the strength of its winds at that time.

This future tropical storm will be steered westward or west-northwestward through the northern Gulf of Mexico in the direction of Louisiana and East Texas. That movement will be induced by the clockwise flow around a high-pressure system centered in the southern Rockies and Plains.

Barry will then be drawn inland this weekend somewhere from East Texas into the lower Mississippi Valley through a gap between the Rockies and Plains high-pressure system and an extension of the Bermuda high over the Bahamas and the Florida Peninsula.

For now, it looks like landfall may occur Saturday, any time from early morning into the afternoon or evening.

As far as the system’s intensity forecast is concerned, Barry will be at least a tropical storm, and it’s increasingly possible it will become a hurricane before its landfall Saturday.

Residents along the northern Gulf Coast should monitor the forecast closely knowing that conditions could change, and make sure your preparedness kit is ready to go in case evacuations are issued.

A major threat of heavy rain and flash flooding is in play into early next week somewhere near and inland from the Gulf Coast.

How much rain falls depends on how fast Barry moves and its exact track, rather than its intensity.

Typically, these types of tropical cyclones produce their heaviest rain along and to the east of their tracks. This suggests heavy rain is possible from parts of East Texas into Louisiana, Mississippi, Alabama and parts of the Florida Panhandle.

At least locally heavy rain is likely to persist over parts of the Deep South well after the center moves ashore and may persist into early next week.

For now, the NHC suggests 6 to 12 inches of additional rain could fall through early next week, with isolated totals up to 18 inches.

Increasing onshore flow is expected to produce coastal flooding at high tide as soon as Thursday along the northern Gulf Coast.

In general, peak water rise from storm surge will occur along and to the east of Barry’s track near landfall, anytime from late Friday night into Saturday.

Onshore winds should persist for some time Saturday, perhaps into Sunday to the east of Barry’s center, even as Barry is inland, continuing coastal flooding in some spots.

The inundation forecast below from the NHC should be thought of as peak water levels above ground if storm surge occurs at high tide.

These onshore winds will also produce dangerous, life-threatening rip currents along parts of the northern and eastern Gulf Coast.

Hurricane-force winds (74-plus mph) may arrive in the hurricane watch area in southern Louisiana by Friday night, with tropical-storm-force winds (39-plus mph) possible by early Friday.

Tropical-storm-force winds may arrive in the tropical storm watch area in southeastern Louisiana as soon as late Thursday or early Friday. Coupled with increasing coastal flooding, that may make final preparations difficult.

Computer forecast models for several days have shown that an upper-level disturbance meteorologists call a mesoscale convective vortex (MCV) originated in the Midwest last week, then moved from the Deep South into the northeastern Gulf of Mexico.

These swirling areas a few thousand feet above the ground are produced by thunderstorm clusters. Because they already have spin, moisture and energy, they can occasionally become tropical systems once over water.

Gulf water is warmer than average for early July, with sea-surface temperatures from 84 to 88 degrees, and according to an analysis from the Cooperative Institute for Meteorological Satellite Studies at the University of Wisconsin-Madison, there is no appreciable wind shear over the Gulf of Mexico that could prevent a tropical depression or storm from forming.

July has accounted for only 8% of the Atlantic hurricane season’s named storms since 1851, according to NOAA’s Hurricane Research Division.

Most tropical depression and tropical storm formation occurs in the Gulf of Mexico and the far western Atlantic over the warm Gulf Stream, particularly in early July.

Development then becomes more common throughout the rest of the Atlantic Basin as July progresses. By late July, development occurs more frequently due to the warmth of ocean temperatures and disturbances, like tropical waves and thunderstorm complexes, instead of old frontal boundaries.

In the last 15 years, there have been several notable July storms.

July 2018 was unusual since both Beryl and Chris formed into hurricanes during the month. That marked the first time since 2008 that the Atlantic had a pair of July hurricanes.

The strongest recent storm to make landfall in the United States in July was Hurricane Dennis, which made landfall in the western Florida Panhandle on July 10, 2005, as a Category 3 hurricane.

Most systems in July stay out to sea, but as you can see above, a few storms, and even hurricanes, can come ashore.

It is best to be prepared every hurricane season before tropical storms and hurricanes develop if you live anywhere near the coast.