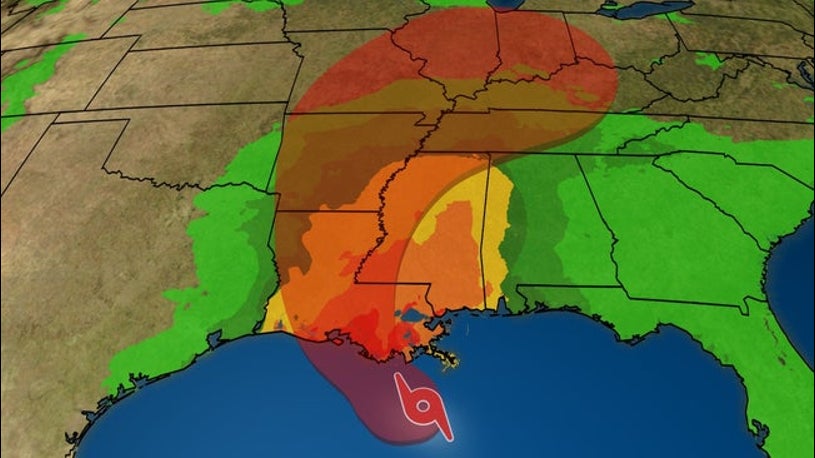 Tropical Storm Barry is intensifying and is expected to make landfall Saturday as a hurricane along the northern Gulf Coast, spreading widespread torrential rain up the lower Mississippi Valley, leading to major river flooding and flash flooding in parts of Louisiana, Mississippi, Alabama and Arkansas, along with storm-surge flooding and strong winds.

While Barry is expected to become a hurricane before landfall, its water (rain, surge) impacts are bigger concerns than wind. Let’s begin by listing current watches and warnings in effect.

Flash flood watches are in effect for parts of Louisiana, Mississippi, Alabama and the western Florida Panhandle. This includes New Orleans, Baton Rouge, Jackson and Mobile.

A storm-surge warning has been issued for a portion of the southeastern and south-central Louisiana and Mississippi coast from Intracoastal City, Louisiana, to Biloxi, Mississippi, and also for the north, west and east shores of Lake Pontchartrain. A warning means there is a danger of life-threatening inundation from rising water moving inland from the coast within the next 36 hours.

Storm-surge watches are in effect from Biloxi, Mississippi, to the Mississippi/Alabama border. A watch means life-threatening inundation is possible within the area, generally within 48 hours.

Hurricane warnings are in effect for a part of southern Louisiana, including Morgan City and Grand Isle. This means hurricane conditions are expected somewhere within the warning area. These warnings are typically issued 36 hours before the anticipated first occurrence of tropical-storm-force winds (39-plus mph), conditions that make outside preparations difficult or dangerous.

Tropical storm warnings have been issued in much of southern and central Louisiana, including New Orleans, Baton Rouge, Lafayette and Alexandria. This means tropical storm conditions are expected somewhere within the warning area within the next 36 hours.

Hurricane watches are in effect in southern Louisiana from the mouth of the Mississippi River to Grand Isle and from Intracoastal City to Cameron. This means hurricane conditions are possible in the area within the next 48 hours.

Tropical storm watches cover the entire Mississippi Gulf Coast. This means tropical storm conditions are possible in the area within the next 48 hours.

Barry remains a rather odd, lopsided tropical storm, with most of its thunderstorms located south of its center, due to a combination of northerly wind shear and drier air blowing over its center.

There are some showers and thunderstorms rotating into the northern Gulf Coast with brief heavy rain, but none of these are triggering flash flooding at this time.

Winds are picking up along the Gulf Coast, and certainly over the Gulf, as measured by offshore buoys and oil platforms. Some gusts over 40 mph are now occurring in extreme southeast Louisiana near Boothville. The strongest winds are generally east of the center of Barry.

Waves are building in the Gulf, particularly east of the center of Barry, with some significant offshore wave heights now over 10 feet.

Flooding was also reported Friday morning in Grand Isle, Louisiana, about 50 miles south of New Orleans on a barrier island, according to local media.

As Barry approaches, water levels are also rising on the Mississippi River at the Carrollton gauge in New Orleans. The anticipated crest Saturday is a foot below the 20-foot height of river levees.

Barry will be drawn inland this weekend into the lower Mississippi Valley through a gap between a high-pressure system in the Rockies and an extension of the Bermuda high over the Bahamas and the Florida Peninsula.

Landfall should occur any time from overnight Friday night into Saturday afternoon. A landfall would occur earlier/later if the center tracks along the right/left side of the forecast cone below.

Barry may be able to gain enough strength to become a hurricane prior to landfall.

Residents along the northern Gulf Coast should monitor the forecast closely, make sure their preparedness kit is ready to go, and heed all evacuation orders from local officials.

Regardless of whether Barry is a tropical storm or hurricane, a major threat of heavy rain and flash flooding is in play into early next week in the lower Mississippi Valley.

How much rain falls depends on how fast Barry moves and its exact track, rather than its intensity. Typically, these types of tropical cyclones produce their heaviest rain along and to the east of their tracks.

Heavy rain is expected in much of Louisiana and Mississippi, as well as parts of Arkansas, Alabama and the western Florida Panhandle.

This heavy rain will persist in some areas well after the center moves ashore and could last into Monday, or even Tuesday.

The NHC suggests 10 to 20 inches of rain could fall through early next week in southeast Louisiana and southwest Mississippi, with isolated totals up to 25 inches. The remainder of the lower Mississippi Valley could pick up 4 to 8 inches of rain, with localized amounts up to 12 inches.

These amounts of rain are expected to lead to dangerous, life-threatening flooding over portions of the northern Gulf Coast and lower Mississippi Valley. River flooding is likely to last for several days, if not over a week in some areas.

NOAA’s Weather Prediction Center has also issued a high risk of excessive rainfall for portions of far southwestern Mississippi and southeastern Louisiana, including the New Orleans metro area, for Saturday. About 40% of all U.S. flood deaths and 90% of all flood-related damage occur in and near high-risk areas.

In general, peak water rise from storm surge will occur along and to the east of Barry’s track near landfall, anytime from late Friday night into Saturday.

Onshore winds should persist for some time Saturday, perhaps into Sunday to the east of Barry’s center, even as Barry is inland, continuing coastal flooding in some spots.

The inundation forecast below from the NHC should be thought of as peak water levels above ground if storm surge occurs at high tide. The times of normal high tide are generally near or just after dawn along the Louisiana and Mississippi coasts. At Shell Beach, Louisiana, just east of New Orleans on the southern shore of Lake Borgne, high tides occur in late morning each day through Sunday.

These onshore winds will also produce dangerous, life-threatening rip currents along parts of the northern and eastern Gulf Coast. Gulf waters were closed at both Orange Beach, Alabama, and Panama City Beach, Florida, Thursday due to the rip-current danger.

Tropical-storm-force winds are expected to arrive in the tropical storm warning area in southern Louisiana during the day, Friday. Coupled with increasing coastal flooding, that may make final preparations difficult.

Tropical-storm-force winds are possible in the tropical storm watch area along the Mississippi Gulf Coast by Friday night or Saturday.

A few tornadoes are possible through Saturday across parts of Louisiana, southern and central Mississippi and coastal Alabama as Barry moves inland.

Barry’s origins were from a cluster of thunderstorms in the Plains around the Fourth of July, spawning an area of spin a few thousand feet above the ground, which eventually moved into the Gulf of Mexico to spawn Barry.

The National Weather Service issued a rare flash flood emergency for much of the New Orleans metro area Wednesday morning, July 10. Parts of the city picked up over 10 inches of rain in just a few hours, triggering widespread street flooding.

If that wasn’t enough, a tornado was sighted over the western New Orleans metro Wednesday morning, July 10.