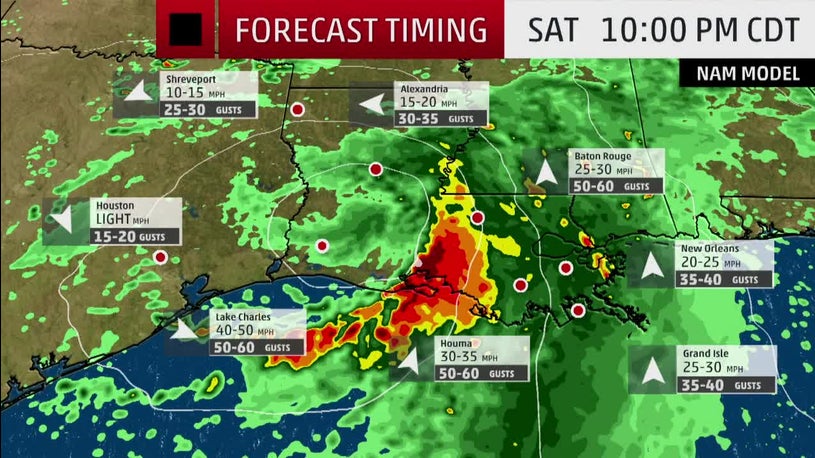 Barry made landfall along the Louisiana coast midday Saturday and will spread torrential rain up the lower Mississippi Valley, leading to major river flooding and flash flooding in parts of Louisiana, Mississippi, Alabama, Arkansas and Tennessee, along with storm-surge flooding and strong winds.

Barry made landfall as a hurricane early this afternoon near Intracoastal City, Louisiana.

Barry continues to move slowly into Louisiana with forward speed only around 8 mph.

A storm-surge warning has been issued for a portion of the southeastern and south-central Louisiana and Mississippi coast from Intracoastal City, Louisiana, to Biloxi, Mississippi, and also for the north, west and east shores of Lake Pontchartrain. A warning means there is a danger of life-threatening inundation from rising water moving inland.

Storm-surge watches are in effect from Biloxi, Mississippi, to the Mississippi/Alabama border. A watch means life-threatening inundation is possible within the area.

Tropical storm warnings have been issued in much of southern and central Louisiana, including New Orleans, Baton Rouge and Alexandria. This means tropical storm conditions are expected somewhere within the warning area.

Barry is a rather odd, lopsided storm, due to a combination of northerly wind shear and drier air blowing over its center.

However, heavy rainbands continue to move ashore along parts of the Gulf Coast, from southern Louisiana to parts of Mississippi and Alabama.

Wind gusts over 50 mph have been clocked early Saturday in parts of southern Louisiana as Barry’s center moves through. The strongest winds were generally east of the center of Barry.

A couple of trees came down in the Baton Rouge area early Saturday and winds have gusted as high as 47 mph as of midday Saturday.

A few roads were impassable Saturday morning near Bayou La Batre, Alabama, due to coastal flooding.

Offshore waves in the Gulf are on the order of 8 to 15 feet, mainly east and south of the center of Barry.

Storm surge only produced a 1-foot rise on the Mississippi River at New Orleans. The river is expected to remain near a 17-foot stage, its highest level in more than eight years, but should remain 3 feet below the 20-foot height of river levees.

Barry will be drawn inland the next few days into the lower Mississippi Valley through a gap between a high-pressure system in the Rockies and an extension of the Bermuda high over the Bahamas and the Florida Peninsula.

Barry is bringing a major threat of heavy rain and flash flooding for the next few days in the lower Mississippi Valley, due to Barry’s slow movement.

Typically, these types of tropical cyclones produce their heaviest rain along and to the east of their tracks.

Heavy rain is expected in much of Louisiana and Mississippi, as well as parts of Arkansas, Alabama, Tennessee, and possibly extending into southeast Missouri and western Kentucky.

This heavy rain will persist in some areas well after the center moves ashore and could last into Monday, or even Tuesday.

The NHC suggests 10 to 20 inches of rain could fall the next few days in southern Louisiana and southwest Mississippi, with isolated totals up to 25 inches. The remainder of the lower Mississippi Valley could pick up 4 to 8 inches of rain, with localized amounts up to 12 inches. Rainfall could also total 4 to 8 inches over western parts of the Tennessee Valley by early next week.

These amounts of rain are expected to lead to dangerous, life-threatening flooding over portions of the northern Gulf Coast and lower Mississippi Valley. River flooding is likely to last for several days, if not over a week in some areas.

At least one river – the Comite River near Comite Joor Road, in the northeast Baton Rouge area – is now predicted to crest at record levels on Monday, according to a NOAA forecast issued Friday night. The forecast crest of 34.5 feet would top the 34.22 feet observed in the catastrophic flood of August 2016.

NOAA’s Weather Prediction Center has issued a high risk of excessive rainfall for portions of far southwestern Mississippi and Louisiana, for Saturday and Sunday. About 40% of all U.S. flood deaths and 90% of all flood-related damage occur in and near high-risk areas.

In general, peak water rise from storm surge will occur along and to the east of Barry’s track near landfall, today.

Onshore winds should persist at least into Sunday, if not Monday, to the east of Barry’s center, even as Barry is inland, continuing coastal flooding in some spots.

The inundation forecast below from the NHC should be thought of as peak water levels above ground if storm surge occurs at high tide. The times of normal high tide are generally near or just after dawn along the Louisiana and Mississippi coasts. At Shell Beach, Louisiana, just east of New Orleans on the southern shore of Lake Borgne, high tides occur in late morning each day through Sunday.

These onshore winds will also produce dangerous, life-threatening rip currents along parts of the northern and eastern Gulf Coast. Gulf waters were closed at both Orange Beach, Alabama, and Panama City Beach, Florida, Thursday due to the rip-current danger.

Tropical-storm-force winds may continue into Saturday night, especially in areas to the east of the center.

A few tornadoes are possible through Saturday across parts of Louisiana, southern and central Mississippi and coastal Alabama as Barry moves inland.

Barry’s origins were from a cluster of thunderstorms in the Plains around the Fourth of July, spawning an area of spin a few thousand feet above the ground, which eventually moved into the Gulf of Mexico to spawn Barry.

The National Weather Service issued a rare flash flood emergency for much of the New Orleans metro area Wednesday morning, July 10. Parts of the city picked up over 10 inches of rain in just a few hours, triggering widespread street flooding.

If that wasn’t enough, a tornado was sighted over the western New Orleans metro Wednesday morning, July 10.

Barry became the first hurricane of the 2019 Atlantic hurricane season, but weakened by early afternoon.

NETFLIX soars, thanks to 'SQUID GAME'…

Rioter who bragged she wouldn't go to jail gets prison term…