Democrats clashing over health care solutions got a surprising lecture on choosing a winning platform from self-help guru Marianne Williamson.

But even as she schooled them on not getting outmaneuvered by Republicans, Williamson’s voice jumped octaves in what drew comparisons to yodeling online.

It was all part of an attention-grabbing performance where the author warned against the ‘dark psychic force’ of collectivized hatred.

Williamson, who in the first debate called for defeating President Trump with ‘love,’ joined a vigorous discussion about ‘Medicare for All’ and whether the costly and ambitious plan is a political loser.

She spoke as a series of centrist and lower-tier candidates attacked Vermont Sen. Bernie Sanders and Massachusetts Sen. Elizabeth Warren for their plans to effectively replace Obamacare. 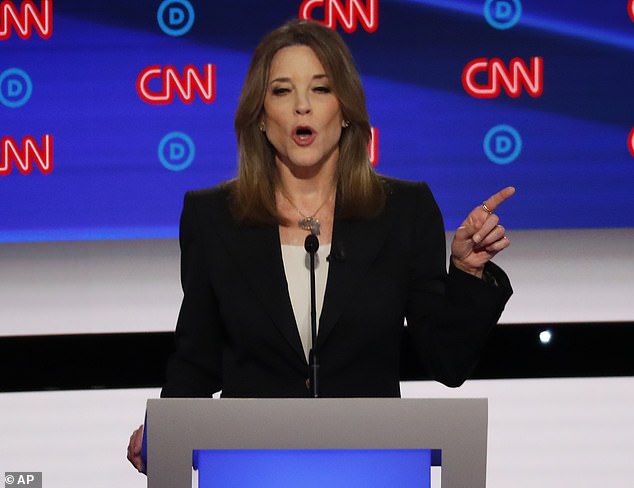 YODEL-AY-HEE-HOO: Author Marianne Williamson gave fellow Democrats a hardball lecture on not getting outmaneuvered by Republicans, as her voiced jumped octaves in what some online observers compared to yodeling

Host Jake Tapper asked Williamson to weigh in. ‘I have to say, I’m normally way over there with Bernie and Elizabeth on this one,’ she said.

But she also referenced the liberal pair’s critics, who were launching attacks Tuesday night.

‘I hear the others, and I have some concern about that as well,’ she allowed.

‘If that’s our big fight, then the Republicans will shut us down,’ she warned.

One online observer immediately compared her pitch online to yodeling. 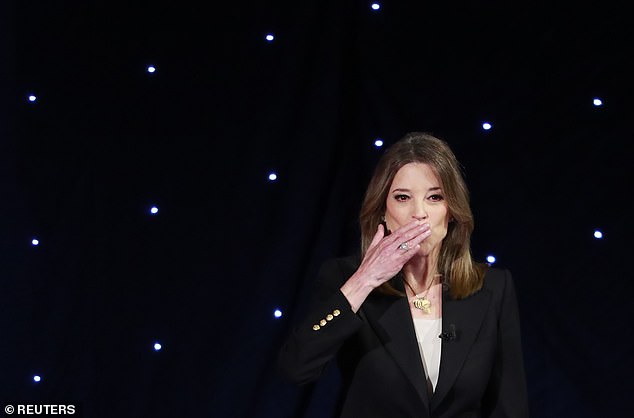 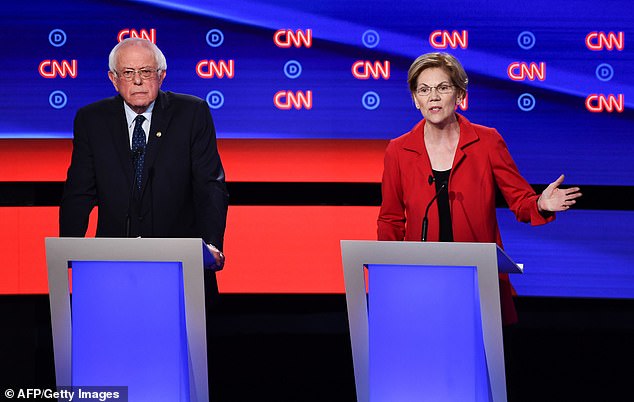 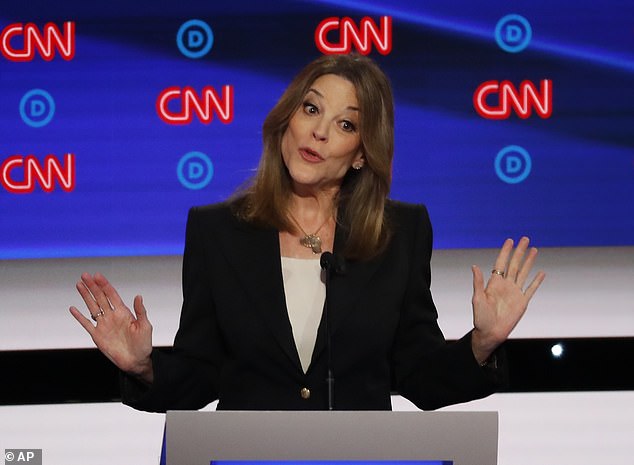 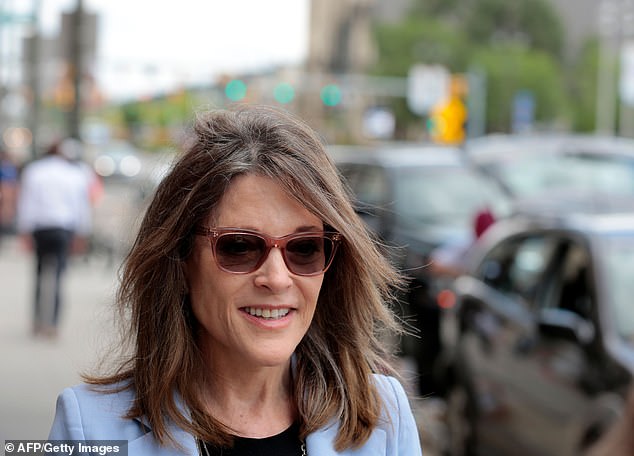 Her take drew a rebuke from South Bend Mayor Pete Buttigieg, who is identified with a more pragmatic approach but who also calls for ‘Medicare for All.’ He has said private insurance should be allowed to remain for now.

Her performance made her the leading Google search term of the candidates on stage, even as a breakdown showed the non-politician got the fewest questions and the least airtime.

She told DailyMail.com after the event: ‘I had some relevant conversation and I hope that people thought I went a little deeper. My frustration with the political establishment is the conversation tends to be very shallow. It tends to be very superficial. It tends to be about external fixes ad nauseam, and not moving into root causes. Not going into the deeper psychological emotional areas, radical truth telling, that is necessary and that deeply concerns me.’

As for the moderators: ‘I think I could have gotten a little more time,’ she kvetched.

She explained what she meant by ‘dark psychic forces’ when asked about it. ‘What are the dark psychological forces? Racism, bigotry, anti-Semitism, homophobia, Islamophobia, the same elements that make up collectivized hatred pretty much anywhere in history. Whoever is powerless at the time. And whoever is not powerless, the person that is the autocratic or fascist leader those that they can pick on. This is nothing new in history. Americans need to wake up to this,’ she told DailyMail.com.

‘I go back and forth on the Medicare,’ she explained. ‘But I don’t know, as of tonight I might be, I think the needle might be moving a little more. If I even mention the word public option, my phone lights up with texts from friends [saying] “Yaaah!” But I worry because I do hear the argument about people not wanting to give up their health insurance. I see both sides of that one.’

Williamson was focused on more spiritual elements of her platform in the first debate. She ended her performance by saying: ‘Mr. President, if you’re listening, I want you to hear me please: You have harnessed fear for political purposes, and only love can cast that out.’

‘Is Marianne Williamson paying for her campaign using the coins from her necklace?’ Twitter left baffled by the New Age author’s quirky jewelry

She was the break-out star of the third Democratic debate on Tuesday.

But on Twitter, many were more preoccupied with Marianne Williamson’s unusual jewelry choice.

The New Age author donned an usual charm necklace, featuring four golden coins and a gold tag, for the event where she referred to Donald Trump as having a ‘dark psychic force’ on the country. 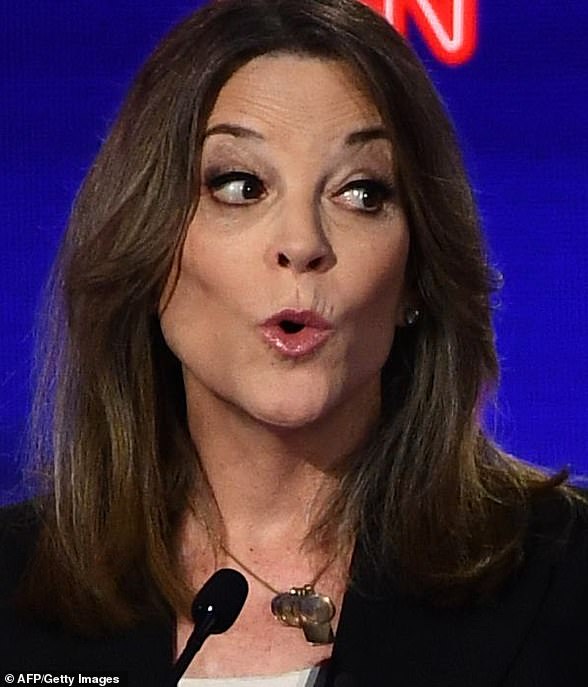 Williamson, who has been mocked in the past for her love of crystals and New Age spirituality, was teased again for the fashion choice as viewers pondered on Twitter what it could represent.

Matt Negrin joked on Twitter: ‘Marianne Williamson uses her closing statement to explain that the three medallions on her necklace are the sacred casings that hold the souls of the three banshees she captured in the Fifth Realm.’ 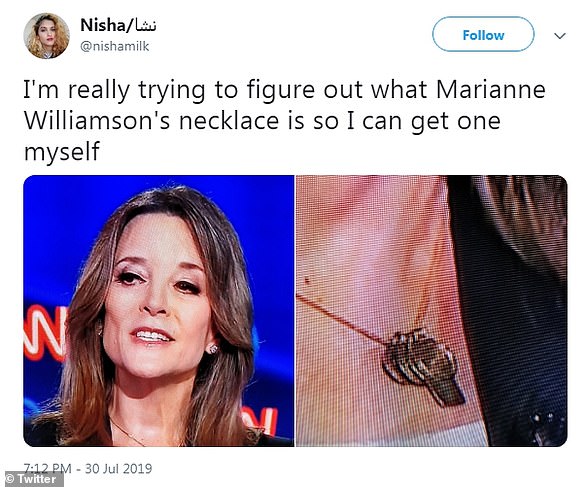 ‘On each coin on Marianne Williamson’s necklace is the name of one of Gwyneth Paltrow’s ex-boyfriends and the reason they broke up, ‘ Rachel Seville Tashjian added.

Another Twitter user with the name Andrew Chloyd Webber asked: ‘Is Marianne Williamson paying for her campaign using the coins from her necklace?’

‘Marianne is a witch look at that necklace,’ James Patrick Creahan tweeted. 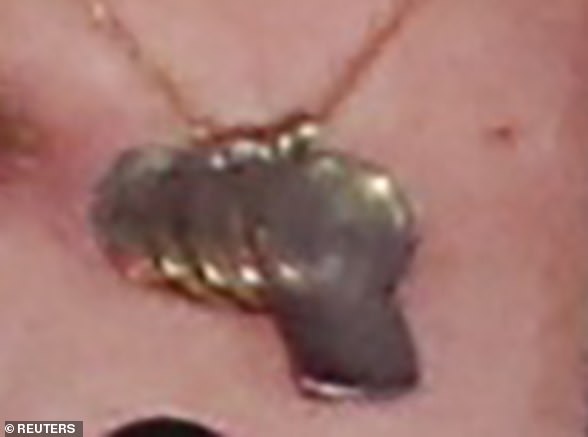 The New Age author donned an usual charm necklace, featuring four golden coins and a gold tag, for the event where she referred to Donald Trump as having a ‘dark psychic force’ on the country 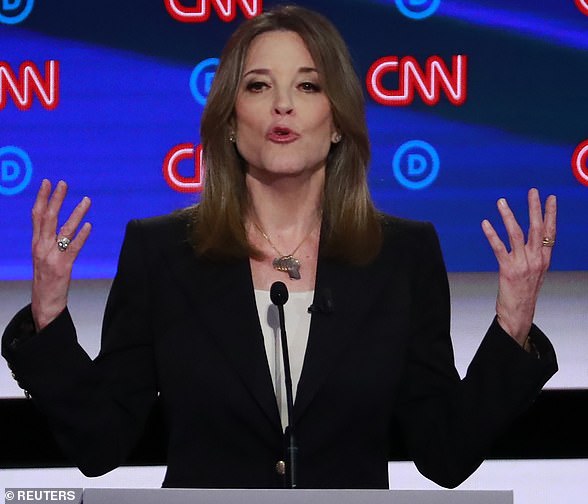 Williamson, who has been mocked in the past for her love of crystals and New Age spirituality, was teased again for the fashion choice as viewers pondered on Twitter

Her impact on the debate came on a day when it came to light that Williamson had officiated Elizabeth Taylor’s wedding to Larry Fortensky – her seventh – at Michael Jackson’s Neverland Ranch back in 1991.

Asked how it came about, she added: ‘She was a nice lady actually. She was a lovely person.’

‘So I, sir, I have a feeling you know what you’re doing. I’m going to harness love for political purposes. I will meet you on that field, and sir, love will win,’ she said.

In her breakout moment of the first debate, Williamson was asked about her first act as president, saying she would call the prime minister of New Zealand, Jacinda Ardern.

‘My first call is to the Prime Minister of New Zealand, who said that her goal is to make New Zealand the place where it’s the best place in the world for a child to grow up,’ she said.

‘I would tell her: ‘Girlfriend, you are so on, because the United States of America is going to be the best place in the world for a child to grow up.’

On Tuesday, she allowed Tapper to cut her off on another question but was still assertive. She looked downward and chided him: ‘Okay I hope you’ll come back to me this time.’

In another speech from the debate stage, Williamson called out racial disparities by pointing to the wealthy Detroit enclave where she lives compared to the issues with clean water in nearby Flynt.

‘I assure you. I live in Grosse Point. What happened in Flynt would not happen in Grosse point,’ she said. ‘This is part of the dark underbelly of American society. The racism the bigotry and the entire conversation that we’re having here tonight. If you think any of this wonkiness is going to deal with this dark psychic force of the collectivized hatred that this president is bringing up in this country then I’m afraid that the Democrats are going to see some very dark days,’ she said. ‘We need to say it like it is.’

On a wealth transfer to the descendants of slaves, she called for reparations and said America will heal only ‘when there’s some deep truth-telling.’

Williamson argued that ‘anything less than $100 billion’ set aside for black Americans ‘is an insult, and I believe that $200-500 billion is politically feasible today.’

‘So many Americans realize there is an injustice that continues to form a toxicity underneath the surface, an emotional turbulence that only reparations will deal with,’ she said, returning her new-age vocabulary to the debate.

She said it was time for some ‘deep truth telling’ on the issue.

‘Payment of a debt that is owed – that is what reparations is,’ she said, to applause.

‘It is time for us to simply realize that this country will not heal,’ she said. ‘People heal when there’s some deep truth-telling. We need to recognize that when it comes to the economic gap between blacks and whites in America, it does come from a great injustice that has never been dealt with.’

In another moment where she called out fellow Democrats, Williamson went after politicians ‘who themselves have taken tens of thousands and in some cases, hundreds of thousands of dollars’ from corporate donors.  from these same

‘I don’t think the Democratic Party should be surprised that so many Americans believe yada yada yada,’ she said.

She also scolded centrists on stage. ‘I look at some of you and I almost wonder why you’re Democrats,’ she said. ‘You almost think something is wrong with using the instruments of government to help people.’

Lawmakers worry '20 will be blueprint for stealing future election…