New York Times columnist Nicholas Kristof tried to nail Senate Leader Mitch McConnell (R-Ky.) with a conspiracy theory about his net worth, but was embarrassed instead when it turned out to be debunked ages ago by his own publication.

“McConnell, your response or explanation?” asked Kristof in a tweet referencing a $23 million difference between his 2005 net worth and his 2015 net worth. 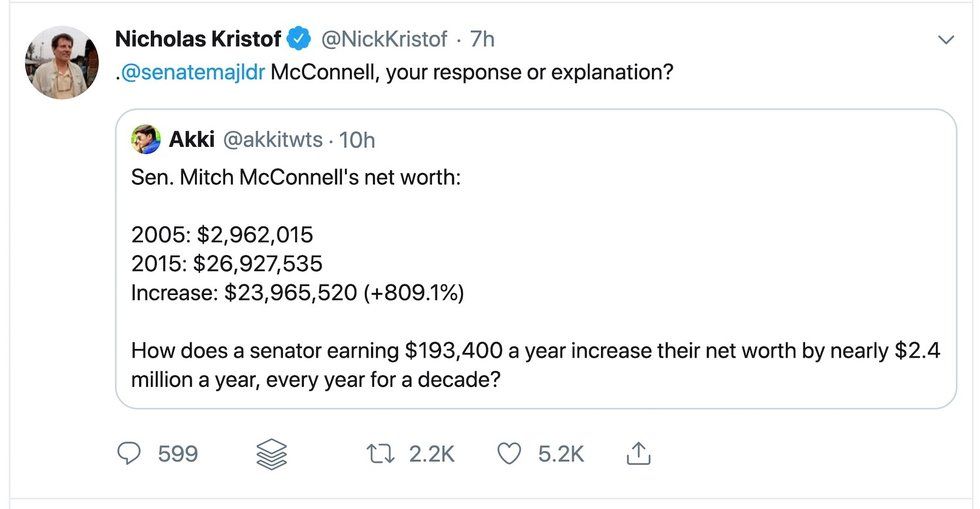 The implication was that McConnell had used the power of his office to illegally or immorally enrich himself.

As many noted on social media, not only had the bizarre conspiracy theory been debunked, but one of the publications to report on it was the New York Times, Kristof’s own employer.

To his credit, he retweeted a link to a Snopes article that explained why McConnell’s worth had increased so greatly over ten years.

Although the meme and the campaign ad upon which it was likely based were set up to make it seem as if McConnell’s wealth increase were the result of his role in the Senate and thus involved unethical or illegal activities, most of his net worth actually derives from his wife, Transportation Secretary Elaine Chao, who hails from a wealthy business family and married McConnell in 1993.

Chao’s mother had also passed away in 2007, leaving the couple a significant inheritance.

“This is how fake news is manufactured,” they tweeted.

Other liberals have been promulgating the discredited conspiracy on social media, including actress Mia Farrow.

Here’s the latest on McConnell conspiracies:


McConnell delivers blazing defense of his position on Russia