The Latest: Trump weighs in on 2020 Democratic debate

DETROIT (AP) — The Latest on the second round of Democratic presidential primary debates in Detroit (all times local):

President Donald Trump is warning that his 2020 Democratic rivals will lead the country “into an economic sinkhole” as he weighs in on the first debate in Detroit.

Trump was uncharacteristically quiet through Tuesday night’s debate but tweeted without evidence Wednesday morning that if he “hadn’t won the 2016 Election” the U.S. “would be in a Great Recession/Depression.”

Trump says the Democratic candidates “will lead us into an economic sinkhole the likes of which we have never seen before.” He adds, “With me, only up!”

Democratic presidential candidates are closing out the latest debate in Detroit.

Marianne Williamson, who won over the crowd with her comments on Flint, Michigan’s water crisis, is calling for “some radical truth telling.” 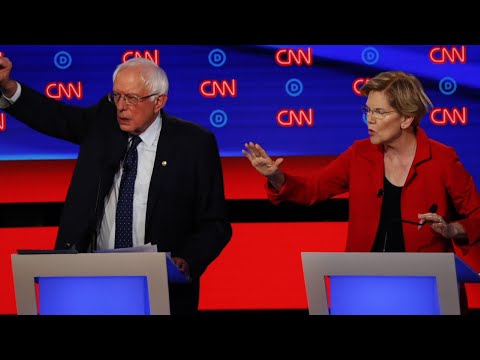 But Massachusetts Sen. Elizabeth Warren says Democrats should be the “big party of structural change.”

And Vermont Sen. Bernie Sanders says he is running to “transform this country and to stand with the working class of America,” which he says has been decimated for decades.

Some Democratic presidential candidates aren’t eager to make age an issue in the 2020 nominating fight.

Mayor Pete Buttigieg is the youngest candidate in the Democratic field at age 37. But he turned a discussion of age at Tuesday’s debate into an attack on congressional Republicans for continuing to support President Donald Trump.

Bernie Sanders is the oldest candidate on the debate stage. But the 77-year-old Vermont senator says Democratic voters must look for a candidate with “vision.”

Standing next to Sanders, Buttigieg is repeating his call for a “new generation” of Democratic leaders.

Age has been a prominent issue in Democrats’ nominating fight. Sanders or former Vice President Joe Biden would be the oldest newly inaugurated president if either wins.

Vermont Sen. Bernie Sanders says he’d work as president to strengthen the United States’ standing with the United Nations and focus on diplomacy, not military action.

Sanders was asked during Tuesday’s debate what differentiates his aversion to the global U.S. military presence from President Donald Trump’s opposition to being “policeman of the world.” Sanders responded that Trump is “a pathological liar.”

Pete Buttigieg pledged to withdraw from Afghanistan — where he served — by the end of his first year in the White House.

The South Bend, Indiana, mayor also advocated for a three-year sunset provision for authorizations of the use of military force, noting that those deployed to Afghanistan will soon be too young to have been alive during the Sept. 11 attacks.

Pete Buttigieg says that as mayor of the diverse town of South Bend, Indiana, “the racial divide lives within me.”

During Tuesday’s debate, Buttigieg was asked how he would convince black voters that he should be the Democratic presidential nominee.

Buttigieg, who is white, says he didn’t become mayor “to end racism,” but he had worked on issues of race, crime and poverty affecting communities of color.

Buttigieg has been criticized for his handling of a police-involved shooting that took him off the campaign trail last month. He came home to a black community that was frustrated and outraged nearly five years after the Black Lives Matter movement was born amid increased awareness about the shootings of unarmed black men by police.

Democrats at the presidential debate in Detroit are weighing in on the nation’s race issues.

Former Colorado Gov. John Hickenlooper says Democrats must show they can “delegate an urban agenda” for substantive changes in schools and affordable housing.

Asked how she would combat white supremacy, Massachusetts Sen. Elizabeth Warren says she would call it out as “domestic terrorism,” blaming President Donald Trump for racially unequal policies in economics and education.

Tuesday’s debate is the first since Trump used racist language to attack four Democratic congresswomen of color, calling on them to “go back” to their countries even though all four are U.S. citizens.

At the presidential debate in Detroit, Hickenlooper says that with Sanders’ liberal policies Democrats “might as well FedEx the election to Donald Trump.”

Sanders is noting that polling shows him beating President Donald Trump in a clutch of key Midwestern states. He says he would beat Trump because “he is a fraud and a phony.”

Hickenlooper says he does not believe Americans would go along with such “radical changes,” and says, “You can’t just spring a plan on the world and expect it to succeed.”

Hickenlooper suggested Sanders was throwing his hands up. Sanders responded, “I will” and did just that.

Sen. Elizabeth Warren is pushing Democrats not to be too timid in the 2020 presidential election.

During the Democratic debate in Detroit, the Massachusetts senator pushed back at moderate criticism by questioning why anyone would run for president just “to talk about what we can’t do.”

Warren is defending single-payer health insurance and other “big ideas” as policy fights worth having.

Former Texas Rep. Beto O’Rourke is standing by his refusal to call for decriminalizing crossing the U.S.-Mexico border by undocumented migrants, saying he will instead overhaul immigration policy enough that “I expect people who come here to follow our laws.”

O’Rourke says that if he is elected president, he will protect those seeking U.S. asylum and people brought to the country illegally as children.

Other presidential candidates are calling for full decriminalization. Massachusetts Sen. Elizabeth Warren says current laws have given President Donald Trump “the power to break families apart” at the border.

The latest Democratic presidential debate has opened with a lengthy argument over the variety of health care proposals that have become a sticking point between centrists and progressives.

Sen. Bernie Sanders began what became a series of exchanges among all 10 candidates on stage in Detroit by telling former Rep. John Delaney “you’re wrong” over a previous characterization of his “Medicare for All” proposal. Delaney had referred to the plan as “political suicide.”

Universal health coverage has been a cornerstone of both of Sanders’ presidential campaigns. He noted that countries like Canada have lower health care costs.

Challenged by Rep. Tim Ryan on a point, Sanders retorted, “I wrote the damn bill.”

President Donald Trump and his Republican allies have cast the Democrats’ reform plans as extreme.

Democratic presidential candidates are wasting no time revealing the fault lines between progressives and moderates as they open Tuesday’s debate.

Sens. Elizabeth Warren and Bernie Sanders are using their opening statements to hammer an economic and political system they say is rigged for the wealthy and corporations.

Sanders notes that half of U.S. households “are living paycheck to paycheck.”

But several other candidates are taking veiled shots at the two leading progressives for liberal proposals like single-payer healthcare.

The first heat of the Democrats’ second round of presidential primary debates is underway in Detroit.

Sens. Bernie Sanders and Elizabeth Warren are at center stage. That gives voters on the party’s left flank a chance to size up the two leading progressives in their first head-to-head matchup.

In the June debates, Warren was matched up against several trailing candidates, with Sanders and the other leading candidates debating on the second night.

Warren and Sanders are joined by several more moderate candidates who are looking to break out.

Among them is Montana Gov. Steve Bullock. He will be getting his first debate opportunity after failing to qualify for the June events. Claimed not to have charged ‘single penny’…