Most Democrats still won’t quite admit it, but they are attempting a stealth impeachment of Donald Trump. Of course, it’s not stealthy if everybody knows about it—and therein lies their problem. As House Minority Leader Kevin McCarthy sniped, “They want to have impeachment without saying the word.”

You see, on the subject of impeachment, the Democrats are half in, and half out—and that could get awkward for them, as they seek a unified message for the 2020 elections. In fact, this year, as well as next, could become an impeachment saga, in which the Democrat presidential candidates are overshadowed. Interestingly, the topic of impeachment did not come up at all in the first round of the Detroit presidential debate on July 30; in the second round, on the 31st, impeachment was endorsed only by two lower-tier candidates, Julian Castro and Bill de Blasio. So we can see: Almost all the Democrat White House hopefuls don’t think the issue helps them.

In the meantime, over on Capitol Hill, for months now, House Speaker Nancy Pelosi has opposed impeachment, reasoning that it would distract Democrats from the ’20 elections and, in particular, put House Democrats representing red or purple districts in a tight spot. So yes, it’s an intra-party power struggle between pro-impeachment progressives and more cautious moderates (relative term).

One such moderate is Rep. Jeff Van Drew, a freshman who last year won a Trump-friendly Republican seat in New Jersey. Van Drew likes being in Congress, and as part of his plan for staying there, he studiously avoids the “I” word; a look at his Twitter feed shows that he emphasizes such issues as welcoming constituents to his office, praising the Coast Guard—and even visiting the U.S.-Mexico border. So we can see: Van Drew wants to stay focused on Republican-friendly issues, not left-Democrat hot buttons. 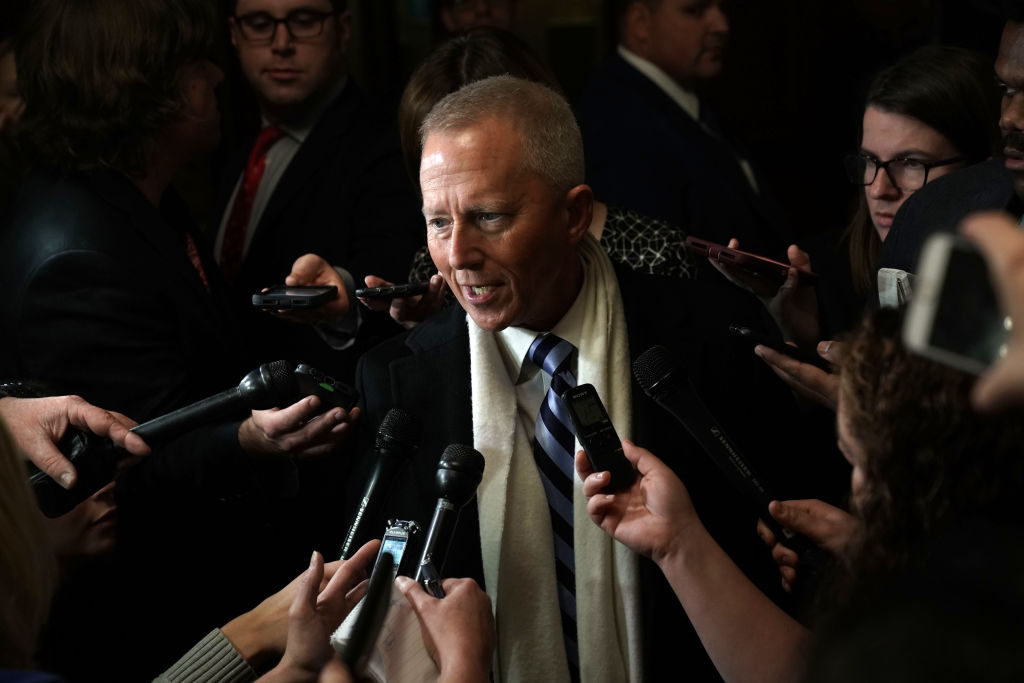 So it must have been painful for the New Jerseyan to get drawn into the impeachment cauldron—on national TV, no less. As recorded by Mediaite, Van Drew appeared on MSNBC and was asked by host Chris Matthews if “seats like yours are in danger if the Democrats move toward impeachment.”  Van Drew answered, “Absolutely.” Continuing, he addressed pro-impeachment progs: “Folks have to realize it was middle Democrats, middle of the road Democrats, that created the majority, and that their voice counts too.”

Van Drew’s careful comments triggered Hollywood liberal Rob Reiner, who was on the same TV segment. Snapped Reiner: “I’m sorry if you lose your seat, but we’ve got to stand up for democracy.”

Such a call to sacrifice himself on the altar of progressive principle was not what Van Drew wanted to hear. After all, if he loses in ’20, he’s out of a job, while Reiner will go on collecting millions in TV and movie residuals—and appearing on more MSNBC programs to lecture politicians.

So on July 17, when left-wing House Democrats forced an impeachment vote, Van Drew was a “nay.” In fact, the impeachment resolution lost 137–95 among Democrats (Republicans were unanimous against the resolution, making the overall vote in the House 332–95 against).

After such a lopsided tally, it seemed as if the Democrats had settled on the Pelosi strategy, namely, no impeachment.

Yet in politics, things aren’t always what they seem. In fact, within the Democrat Party, the flaming hatred of Trump has continued to heat up even after the vote. Admittedly, since the fire was already white hot, a further heating might not seem physically possible—but then, politics has its own physical rules.

Indeed, the fire was so fierce that even events that might have seemed sure to cool the impeachment ardor had, paradoxically, the opposite effect. That was the case with the July 24 appearance of Robert Mueller on Capitol Hill; the hearings were widely seen as a disappointment for impeachment-minded Democrats.

In fact, in the wake of the hearing, the polls didn’t budge—that is, no breakthrough for the impeachers. For instance, we can look to a Fox News poll from July 25, which found that 42 percent of Americans supported impeachment, while 50 percent were opposed.

Yet according to the poll, just among Democrats, pro-impeachment sentiment was more than 4:1, 74 percent for and 18 percent against. And it was among Democrats that Mueller’s appearance seemed perversely inspiring. It wasn’t so much that they thought the special counsel had done a good job in his testimony; instead, it was more the case that Democrats were on a hair-trigger—they were simply tired of waiting. For left-wing Democrats, with apologies to Shakespeare, it was finally time to Cry havoc and let slip the dogs of war!

Indeed, such is the fervor among Democrat activists these days that even Democrats who supported impeachment, but aren’t seen as progressive enough, are getting challenges. That’s what’s happening to Rep. Donald Payne, also of New Jersey; he now faces a 27-year-old challenger who pledges that if he wins, he will seek to join AOC’s Squad.

In response, House Democrats are moving to the left. A July 26 headline in Politico laid out the new line: “Dems move closer to impeachment in strategy shakeup.” The story detailed the decision of House Judiciary Committee chairman Jerry Nadler to seek Mueller’s grand jury information; that’s a newly aggressive tack, and as Nadler made clear, the prospect of impeachment was part of the rationale for this more aggressive approach. 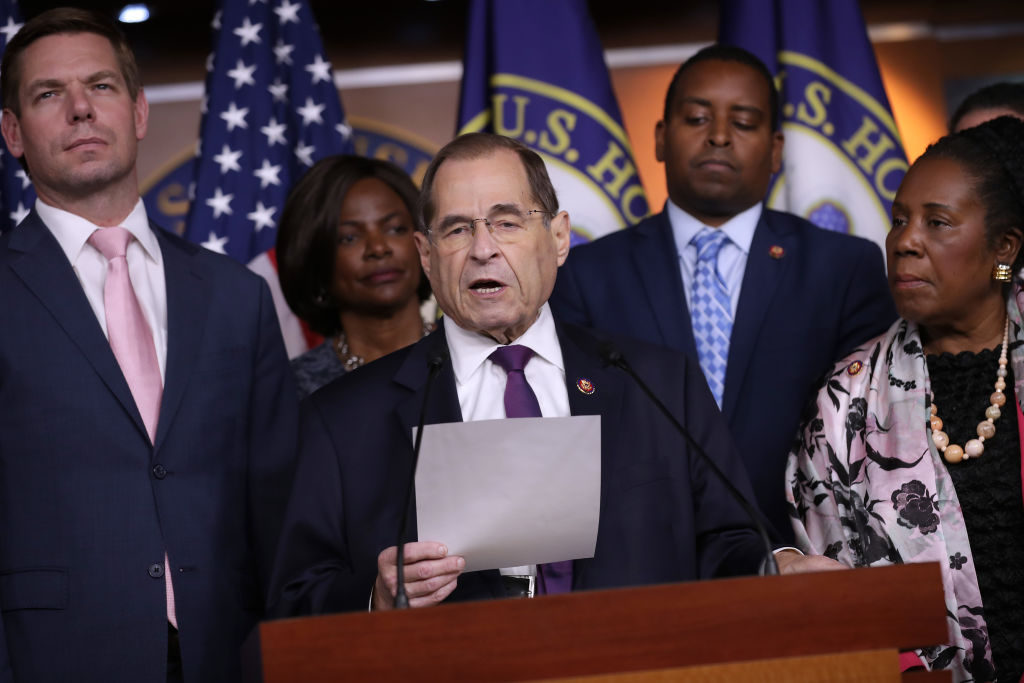 For his part, Nadler, the chairman of the committee that would lead any impeachment effort, has been careful about being too candid; as he said to CNN, “We have to defend the Constitution against these kinds of unconstitutional and illegal deeds.” And then he added, “So, we have to do this, whatever timeframe there is, and we’re doing it now.” If those words seems a little vague and tangled, well, that’s probably what Nadler has in mind; he wants to placate Democrat pro-impeachers, while not overly alarming the anti-impeachers.

However, the pro-impeachers are fired up and ready to go. According to a name-by-name whip count maintained by Axios, the number of House Democrats in favor of impeachment is now up to 116; that is, it’s risen by 21 just since that vote on July 17. And Politico reports that, in fact, a majority of the 235 House Democrats now support impeachment. If so, then Democrats have reached a tipping point—and that could force Pelosi’s hand. Indeed, in an August 1 op-ed, Rep. Ted Deutsch (D-FL) wrote, “The question is no longer whether the House should vote to proceed with a formal impeachment inquiry. The inquiry has already begun.”

In the meantime, the third-ranking Democrat Senator, Patty Murray, added her voice as well, making for at least a dozen pro-impeachment lawmakers on the other side of Capitol Hill. And on July 30, a group founded by Democrat donor-turned-presidential hopeful Tom Steyer unveiled a new pro-impeachment spot, sure to heat things further. (It must be nice to have enough money to finance both an impeachment crusade and a presidential campaign.)

Lessons from the Recent Past

Yet even as they are stoking their own impeachment passions, Democrats might benefit from some recollecting of history—recent history.

Not so long ago, in 1998, the national midterm elections were waged on the issue of impeachment—the impeachment, that is, of President Bill Clinton. The parallels to today are instructive, and not at all encouraging to today’s would-be impeachers.

Back in ’98, Republicans were in full fury about Clinton and his lies about Monica Lewinsky, about the blue dress, and all that. There’s no need to re-litigate all those events; suffice it to say that the polls at the time showed that the American people were not overly troubled by these revelations. Indeed, buoyed in part by a strong economy—and in part by a public backlash against too-fervent GOP crusaders, who let themselves be painted as zealots—Clinton’s approval rating actually went up; all through 1998, it stood in the 60s. Meanwhile, only about a third of Americans supported impeachment.

Yet heedless of these poll findings, Republicans charged ahead anyway, choosing to make the ’98 midterms a referendum on impeachment. 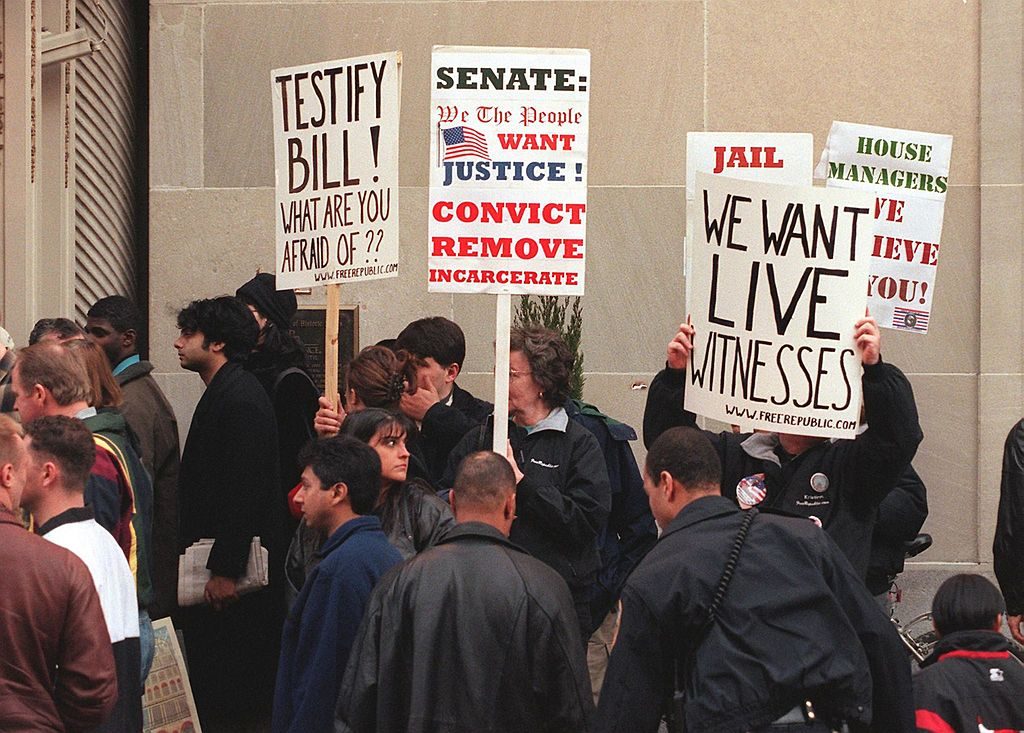 The result was a historic defeat for the the GOP. Typically, in a second midterm—that is, after a president has been in power for six years—the “out” party makes big gains in the balloting. And yet in ’98, instead of the Republicans winning big, it was the Democrats who made gains. (One notable, and consequential, Democrat pickup that year was the New York senatorial victory of Chuck Schumer.)

The ’98 midterm results were a clear signal from the voters to the GOP: Worry about something else, other than Bill Clinton. Yet weirdly, even after the ballots were counted, Republicans slogged ahead anyway. The GOP House voted to impeach in December 1998, and then the battle went to the Senate, where, in February 1999, the GOP failed to win a majority for conviction, to say nothing of the two-thirds majority needed to convict.

Some will say that the impeachment vote didn’t actually hurt the Republicans; the GOP did, after all, do reasonably well in the 2000 election—that being an election in which George W. Bush lost the popular vote while still eking out an electoral college victory. Of course, it helped Republicans that by the time of Election Day, 2000, the impeachment fiasco was nearly two years in the rearview mirror.

Still, it could be argued that the 2000 election mostly ratified the GOP’s disappointing 1998 results. Yes, Bush won the White House, but he garnered only 47.9 percent of the popular vote; in fact, he received more than half-a-million fewer votes than Al Gore.

Now, two decades later, the Democrats have an impeachment obsession of their own: In 2019, the impeachment kindling has been lit, and yet the calendar, today, is such that it’s likely that the impeachment fireball will be rolling, even as the Democrat presidential candidates are debating and campaigning. And all this when—as was the case 20 years ago—national polls show a distinct lack of enthusiasm for the cause of removing the president without an election.

So while there’s never a way to predict the future, it does seem that, once again, the pro-impeachment party is likely to get burned.