An Alabama public high school announced it’s holding a “Back to School Worship Service” this weekend in its gym — and national atheist activist group the Freedom From Religion Foundation didn’t take kindly to the news. 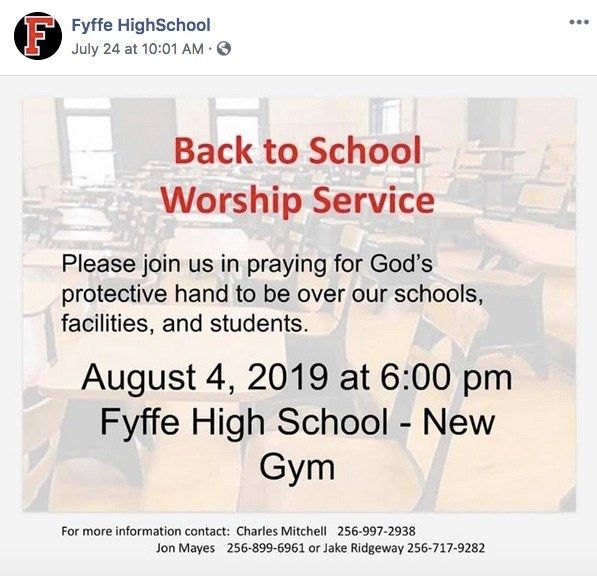 “Please join us in praying for God’s protective hand to be over our schools, facilities, and students,” the post reads.

The FFRF said in a complaint letter that it learned about the worship service from “a concerned DeKalb County Schools parent” who added that the event is being “organized and promoted by school faculty members.”

The FFRF letter demanded that the district investigate the situation and “make certain that its teachers and administrators are not unlawfully and inappropriately indoctrinating students in religious matters” and tell the FFRF what steps it’s taking to “protect the right of conscience of its minority religious and nonreligious students and families.”

AL.com reported that it requested a response from the school.

“This religious promotion is not only problematic from a constitutional perspective, but is also a harmful assault on the students’ right of conscience,” FFRF Co-President Annie Laurie Gaylor told the outlet. “DeKalb County Schools must direct its focus, time and resources toward educating its students, not proselytizing to them.”

How are folks reacting to the worship service announcement?

While one commenter asked, “[Which] god are you praying to? Asking for a friend,” the rest of the comments on the school’s Facebook page regarding the worship service were decidedly positive: