A UK transgender woman is complaining that a bank has been disallowing phone transactions because “I sound like a man.”

“I opened the account in October last year,” Ellen Westerleigh told the Nottingham Post regarding HSBC bank. “I had to order a new card, and they sent a card that said Mr. rather than Miss. They said it was an error. Every time I ring up to speak about my account they say I ‘don’t sound like a woman.’ I have to prove who I am, and I shouldn’t be having to do that.” 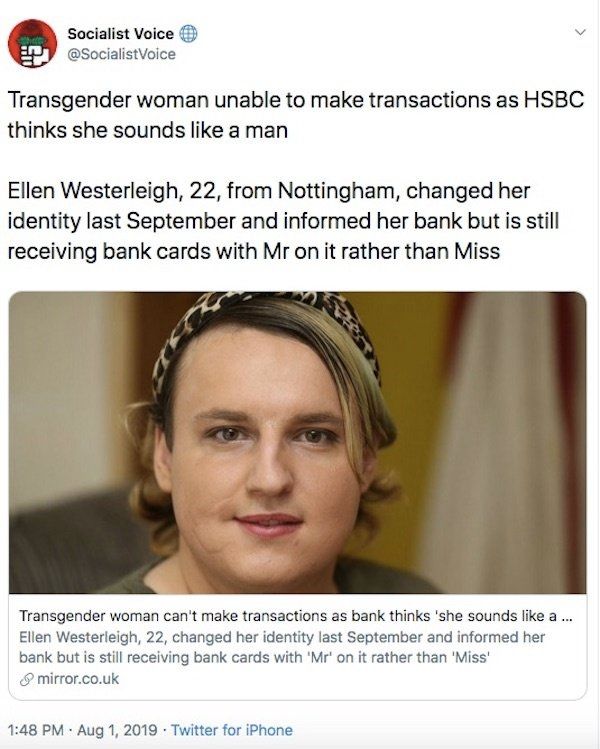 ‘I know I sound like a man, but that’s not the point’

Westerleigh added to the paper, “I know I sound like a man, but that is not the point. I do feel uncomfortable ringing up my bank. It has happened three or four times, and it is ridiculous. It has got to a point where I have to go into my branch and show my ID, and I do not live near my branch. The nearest is the City Centre.”

The 22-year-old lives in Strelley, the Post said — which is about five miles or an 18-minute drive from Nottingham City Centre.

The latest incident was when HSBC refused to transfer money from Westerleigh’s account because the bank didn’t believe the person on the phone was Westerleigh despite security questions having been answered, the paper reported.

“I have told them several times ‘I am transgender.’ It is in my file. I should not have to keep saying it,” Westerleigh added to the paper. “They do not take the trans community seriously. They just think we are not that gender.”

Westerleigh — who used to be known as Kurtis — became Ellen last September after being uncomfortable as a male for a long time, the Post said.

“I grew up with two sisters, and it was obvious,” Westerleigh told the paper. “I always wanted to put on dresses or play with their toys. In September, I thought it was time to be true to myself.”

Westerleigh — who said “Ellen” was chosen due to inspiration from TV host Ellen DeGeneres — is now waiting for hormone therapy and a sex change, the Post reported.

What is HSBC saying?

HSBC told the paper that its customer care team is reviewing Westerleigh’s complaint and has recently made changes to its systems and training to support transgender customers.

“We are very sorry for the disappointing level of service experienced by Miss Westerleigh, and are committed to learning from this to help ensure it doesn’t happen again,” a HSBC spokesman told the Post. “We are a proud and active supporter of customers and colleagues across the broad spectrum of diversity of sexuality and gender identity. We want everyone to be able to access simple and smart banking solutions that work for them, and we will continue working with our LGBT+ colleagues and customers to ensure we’re getting it right.”

Jen Psaki responds to first busload of migrants arriving in DC: 'It's nice the state of Texas is helping them'

Shanghai reportedly installs high metal barriers around people's homes to prevent them from leaving: 'They might as well just burn us all inside our homes'

County defies atheist group’s demands, keeps crosses on courthouse — and then they’re lit up at night like Christmas