A coffee shop worker told the Washington City Paper she was fired after criticizing a customer’s pin supporting the re-election of President Donald Trump in 2020.

The ex-employee in question — who asked to be identified only as Hannah over fear of not getting future jobs — told the paper she was working late last month behind Open City’s register on the grounds of the National Cathedral in Washington, D.C., when two women came up to order.

“I was very friendly,” Hannah told the paper — that is, until she noticed one of them had a Trump 2020 pin on her backpack.

Hannah told the paper she subsequently “cooled down,” and then the women asked her what was wrong.

“I said, ‘I don’t appreciate you wearing that pin,'” she told the paper — after which the women asked for and received a refund from the coffee shop’s manager.

Oh, but that ain’t all

Jacqueline Johanning — who was in possession of the Trump 2020 pin — noted on Facebook Live that when she complained to the coffee shop manager, his demeanor also changed from friendly to not-so-friendly after seeing her pin. 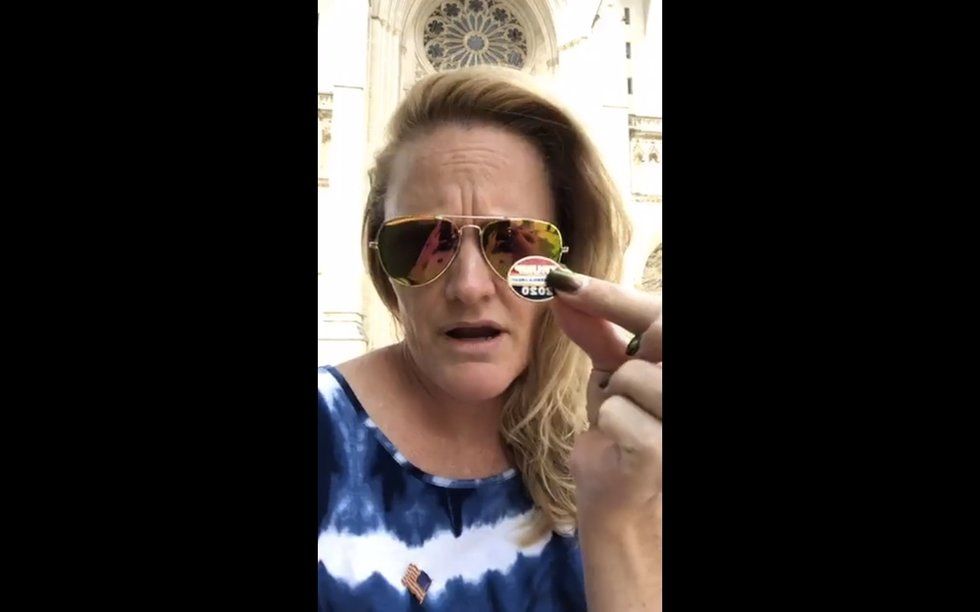 “We have a lot of [LGBTQ] employees here,” the manager said according to Johanning’s video recollection — and that he told her the Trump “administration has discriminated against them. And we try to be tolerant of the patrons that come in here.”

“I said that I believe everyone is entitled to have their views, but it should never cross over the counter,” Johanning continued, adding that the manager didn’t say anything in response.

With that, she said she told the manager “if we’re not welcome here because of our conservative values, then perhaps we should just get our money back” — and before Johanning could finish her words, the manager cut her off with “I’ll give you your money back.”

She added that the manager then began talking to the employee, who responded by “laughing in our faces” about the incident.

Johanning then said the manager returned and “dropped the receipt on the table.”

“This type of discrimination I’ve never experienced before because of my political views,” she added in her Facebook Live clip. “I do have very strong political views. I also am an extremely tolerant person and love every person. I think every person should have their right to feel how they feel, but those feelings should never impact anybody else’s experience.”

More from the ex-employee

Hannah — the ex-employee — added to the paper that one of the women approached her on their way out and told her she discriminated against them.

And Hannah had a response for that, too, the paper said: “As a queer, low-income woman, I think it’s funny you think it’s discrimination.”

What else allegedly happened?

Hannah told the paper she was removed from the schedule for the weekend and then terminated last Monday for violating two of the company’s core principles: all for one and one for all — and mindfulness in every moment.

But Shannon Trexler — chief operating officer of Tryst Trading Co. — noted to the City Paper that Hannah’s termination wasn’t in response to the July 26 incident but that a March incident deemed unprofessional but not political was taken into consideration.

“This being the second type of similar interaction became the decision to terminate with her,” Trexler told the paper while adding, “we’re not taking a political side.”

She also told the paper that the company plans on offering employee training on how to handle politics, and that “we always encourage employees to engage their managers as soon as possible if they’re uncomfortable.”

Hannah confirmed that another incident took place in March concerning a customer that her manager spoke to her about, but says she wasn’t formally disciplined at the time of that incident. Additionally, when Hannah was brought in to meet the general manager on Monday, she says the March incident was never brought up as the reason behind her termination nor was it named as a contributing factor.

Hannah added to the City Paper that she hopes other places of business in D.C. will give employees “freedom to feel like people and not like cogs” — and that employees should be able to discuss politics with customers whether they agree with the customers or not.

Open City posted a Facebook message about the incident, calling it a “political dispute involving a customer and two of our employees that should never have happened. We value and respect both of our hard-working employees and our loyal customers, and we never want Open City at the National Cathedral to be a place where political disagreements get in the way of having a good time, or a good meal.”

Commenters on the post seemed to side with the coffee shop: Leftists let their hatred flow for hospitalized Justice Clarence Thomas — and even wish for his death: 'Let's hope the infection wins!'