Rep. Joaquin Castro (D-Texas), the identical twin brother of presidential hopeful Julian Castro, tweeted out the names and employers of dozens of Trump donors from his own congressional district.

What did he do?

“Sad to see so many San Antonians as 2019 maximum donors to Donald Trump,” Castro tweeted on Monday evening, before naming three of these donors. “Their contributions are fueling a campaign of hate that labels Hispanic immigrants as ‘invaders.'”

He included a graphic with his tweet entitled “WHO’S FUNDING TRUMP? In 2019, these 44 San Antonio donors contributed the most allowable by federal law.”

The graphic then listed the names of 44 San Antonio Residents. Out of these 44, 11 were retired, five were self-employed, one is listed as an entrepreneur, and one was listed as a homemaker. Another had “information requested” listed. The remaining 25 had their place of employment listed below their names.

While TheBlaze will not be publishing these employers, they included large insurance and oil companies as well as companies that seemed to be owned by the donors or their families.

According to the Federal Election Commission, an individual can give $2,800 per election to a candidate committee, and an additional $5,000 to a Political Action Committee or PAC.

Below is an edited version of the graphic that Castro tweeted out. Last names and employers have been blacked out in order to protect the privacy of those listed. 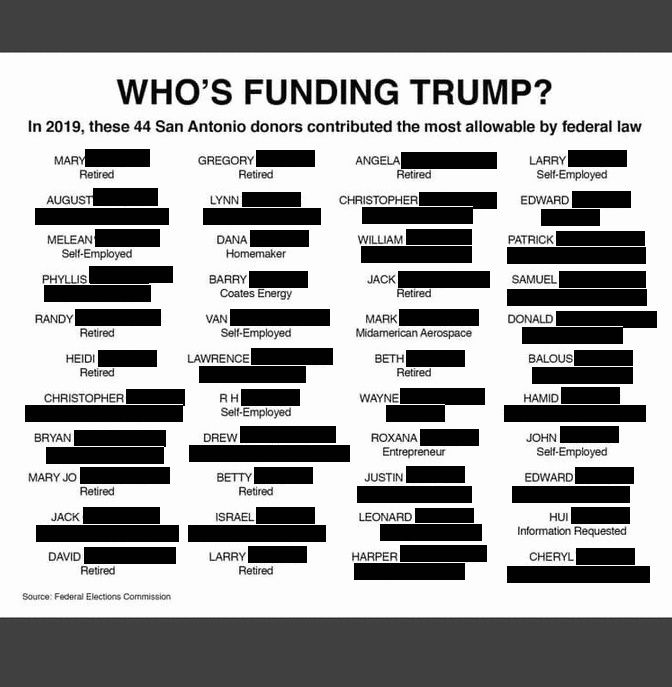 TheBlaze has reached out to Castro’s office for comment. ‘You are obligated to follow God’s truth’: A powerful message for Christian teachers in public schools Vaccine for honeybees approved by USDA