The ‘national divorce’ is already underway — the radical left filed for it and wants the children, too

What I’m about to say gives me no joy to say it. I write this not for click-baity purposes. In fact, as a general rule, I detest sensationalist click-bait media from either side and frequently condemn it on all my platforms. Not to mention, as a Christian, I am compelled by the Scriptures to “whenever it’s possible live in peace with everyone.”

However, on every page those same Scriptures compel me to accept the truth as it is, even if it’s what I would prefer not to be true.

To that end, Erick Erickson has been one of my favorite conservative pundits over the years. I’ve been honored to have him endorse my books in the past. I appreciate his earnest attempts at critical thinking instead of tribalism, as well as his desire to lead with his faith first into the arena. He coined the phrase that best depicted the true aim of the tolerance mob: “You will be made to care.”

That line is actually the title of one of Erickson’s books, which painstakingly documents how the radical left in America has no plans to accommodate those with views that dare to differ from theirs. Which also explains why I’m surprised Erickson recently wrote for his website,
The Resurgent, that “there will be no national divorce.”

I understand he was speaking specifically in that piece to those on the right making such claims in response to persistent assaults against their liberties — in this particular case the Second Amendment. And in that context he’s correct, the right is never filing for a national divorce.

But here’s the real reason why — the radical left has already filed for one, and it wants the children, too.

Oh, to be sure, not every Democrat you know in your own families, neighborhoods, or churches feels this way. Heck, talk with a lot of folks who voted for Hillary Clinton in 2016 that aren’t on Twitter or obsessed with CNN’s Don Lemon, and while you may not agree with them on things like how much government should control health care, overall they’re Team ‘Merica just as you are.

Unfortunately, there appears to be no organized bloc within the Democratic Party willing and/or capable of standing up to the radical left on their behalf. Just look at Joe Biden. We are still 180 days away from the first votes in the Democrat primary being cast in my native Iowa Caucuses. Yet already Uncle Joe has been forced to eject every position he once held that was to the right of Bernie Sanders or risk being ejected from the Intersectionality Olympics faster than you can say Bruce Jenner.

I mean, at their last round of debates all the candidates but Biden spent two nights tearing down President Obama’s legacy as not radical enough for FDR’s sake. If these folks are throwing Obama under the bus, what do you think they have planned for the likes of me and you?

Make no mistake, the radical left that is now assuming full control of a major American political party doesn’t view you as a mere political opponent. They see you as an enemy. You are not to be accommodated; you are to be defeated. Every time you turn onto Tolerance Boulevard, it will be a one-way street.

I don’t want this to be true. I know what it means for our kids and grandkids, and perhaps for our future. Divorces rarely end well. But when one side of a relationship is actively dehumanizing and lying about the other, reconciliation probably isn’t in the cards. The heart is hardened.

This doesn’t mean we have a license to forsake virtue in response, but nor does it mean we practice self-delusion about what is happening here. This is a worldview steel cage match for the soul of a nation. Two worldviews will enter, and only one will leave.

Just ask Reza Aslan, who will
define himself what radical leftists like him have in store:

So then when @KellyannePolls said we need to “eradicate” this evil she meant shoot it in the face? She was threatening the El Paso shooter? We are all so fucking fed up with you racist GOPers and your bad faith bullshit. 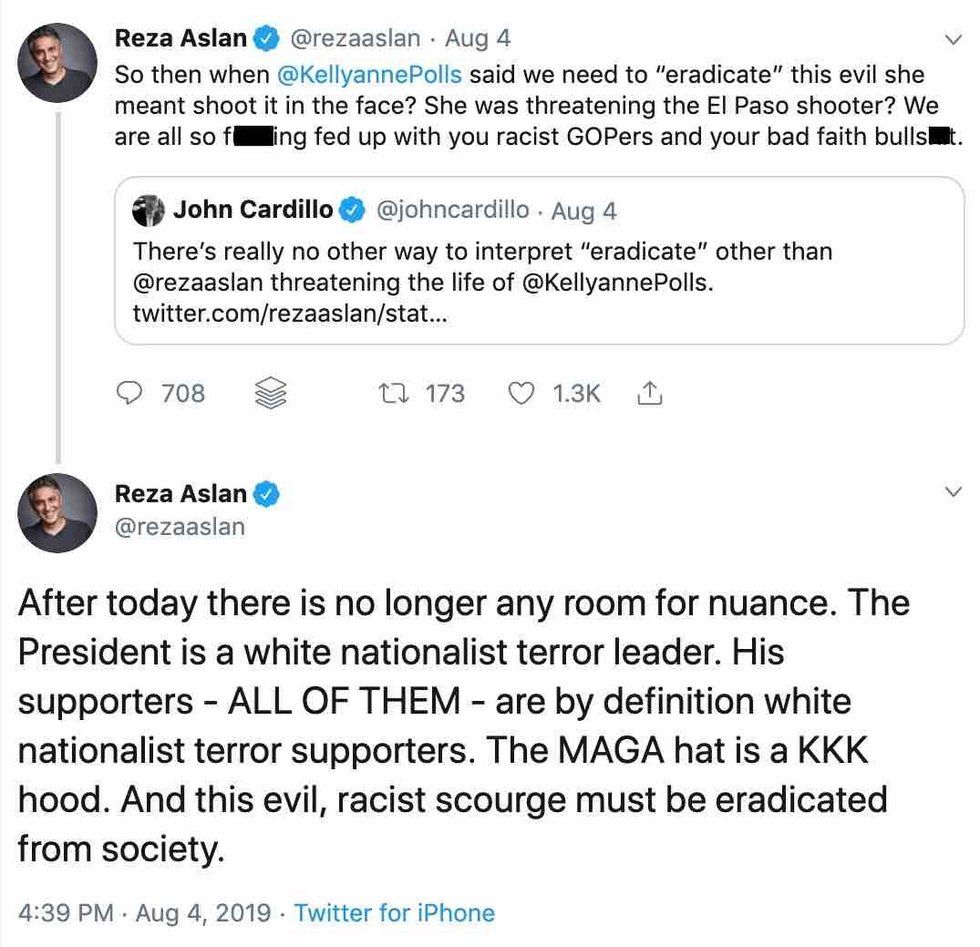 'We are taking these actions today to stand against authoritarianism': Canada's Trudeau decries Russian aggression toward Ukraine