Four people were killed and two wounded Wednesday after a suspect in Garden Grove, California, allegedly stabbed them during a violent crime spree.

The suspect, a 33-year-old male who is now in custody, robbed a bakery in Garden Grove at 4:23 p.m. At 5:04 p.m., police said they found two men who had been stabbed at an apartment complex nearby.

Authorities said one of the victims died on a balcony, while the other died at the hospital soon after.

At 5:40 p.m., reports said the suspect robbed a check-cashing business. Only 25 minutes later, police said a woman was stabbed multiple times at a Garden Grove insurance business that was also robbed. The victim is expected to survive.

Four minutes later, the suspect allegedly argued with a man at a nearby Chevron gas station and stabbed him multiple times. Reports said he also used a machete to injure the man’s nose, nearly severing it. However, the victim is expected to survive his wounds.

Police said at 6:25 p.m., the suspect reportedly robbed a 7-Eleven convenience store in Santa Ana where he stabbed a security guard and took his gun. Authorities said the security guard died from his wounds. 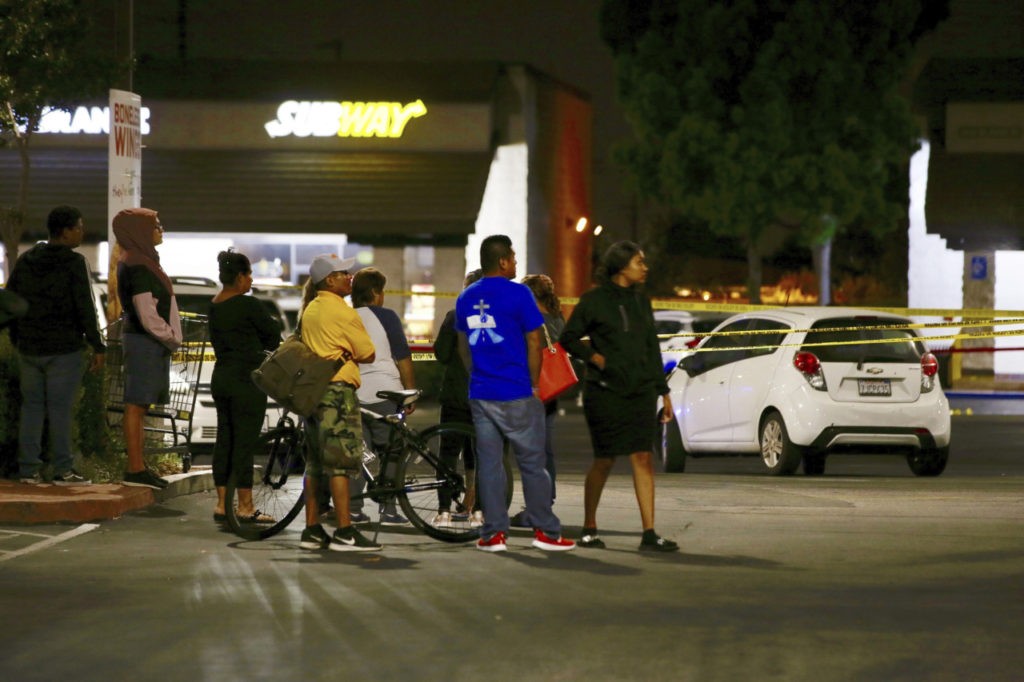 Members of a church group wait behind police lines, fearing they know one person killed by a man stabbing people at a Subway, in Santa Ana, Calif., Wednesday, Aug. 7, 2019. A man killed multiple people and wounded others in a string of robberies and stabbings in California’s Orange County before he was arrested, police said Wednesday. (AP Photo/Alex Gallardo)

Reports said the suspect had also robbed a Subway restaurant and stabbed an employee to death following the incident at the 7-Eleven store.

An undercover Garden Grove policeman observed the suspect as he exited the convenience store and ordered him to drop his weapons. The suspect complied and was taken into custody.

Garden Grove police Lt. Carl Whitney said during a news conference that the only known motives for such actions were “robbery, hate, homicide,” adding that “We know this guy was full of anger and he harmed a lot of people tonight.”

“We have video showing him attacking these people and conducting these murders,” Whitney concluded.

Authorities confirmed that all of the victims and the suspect were Hispanic. Marlow: Tech Monopolies Are Trying to Beat Trump in 2020 by Shutting Down 'Voices to the Voiceless'