Who knew Tommy Lee — bad-boy metal drummer of Motley Crue fame — has such a way with words when it comes to blasting supporters of President Donald Trump?

Lee has been scoring kudos with the left for posting a rant on Twitter Wednesday that starts with this ominous warning: “You Trumpsters better pray that liberals never gain control of the [White House] again because we are going to pay you back so f***ing hard for all this s**t.”

How’s that for cutting commentary and rapier wit, eh?

Here’s more: “ALL parks will be renamed Rosa Parks asap. We’re replacing Confederate statues with [Black Lives Matter] Leaders & Mexican immigrants. Every single public school will be renamed after a child that was kidnapped by this regime. And after we fumigate the [White House], we’re repainting the whole thing rainbow.”

If you’re wondering how Lee — also known for his tumultuous marriage to actress Pamela Anderson, which included a six-month jail sentence for Lee for beating her — managed to compose such colorful barbs, it appears he didn’t. 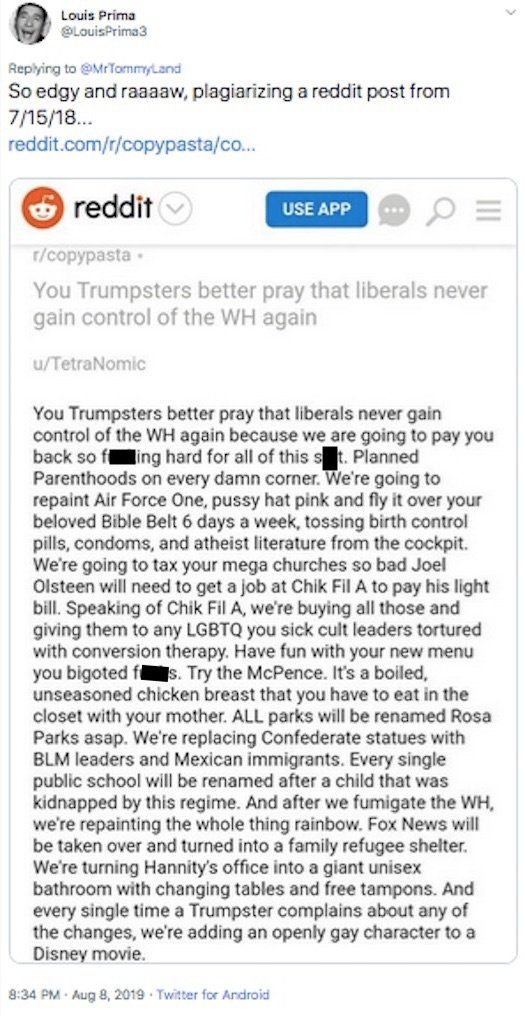 The version Lee posted contains a few words here and there that don’t appear on the Reddit entry, as well as the following sentence: “We’re going to gather up ALL your guns, melt them down and turn them into a gargantuan metal mountain emblazoned with the face of Hillary Clinton.”

But the left sure loves Lee

It isn’t clear if leftist commenters knew the rant on Lee’s Twitter page was for the most part someone else’s — but a bunch of ’em definitely appreciated it:

‘What about the rest of the citizens of New York?’ Soft criminal justice system in NYC allows pervert to allegedly go on sexual assault spree after pleading guilty to sexually ‘coercing’ teenage relative

Bill Maher can’t decide which is WORSE: Stephen Colbert or ‘a room full of Tucker Carsons’