The United Kingdom indeed has been facing an uphill battle when it comes to knife attacks.

Officials have tried a number of tactics to stem the tide of knife attacks: Replacing knives with blunt-tipped cutlery in the kitchens of domestic abuse victims; collecting knives through “surrender” boxes (one of which was broken into and cleaned out); a member of Parliament even suggested placing GPS trackers in the handles of every knife sold.

And much mockery ensued.

But now the U.K.’s Home Office — the lead immigration agency there — is trying something new: Placing “knife free” messages on chicken boxes. 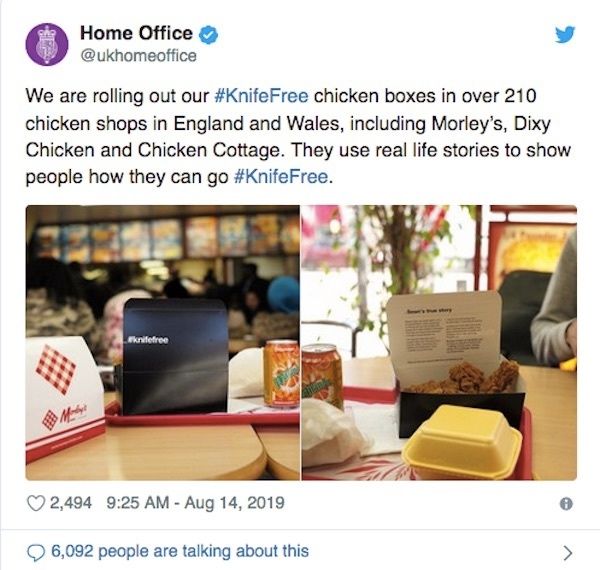 That’s right. Over 321,000 chicken boxes with the government’s #knifefree campaign have been distributed to over 210 outlets in England and Wales, according to PA Media, which added that the insides of the boxes include young people’s real life stories about choosing to pursue positive activities instead of carrying knives.

“These chicken boxes will bring home to thousands of young people the tragic consequences of carrying a knife and challenge the idea that it makes you safer,” Policing Minister Kit Malthouse added to the PA Media.

But the mockery seemed worse this time, as some said the campaign is racist.

“Is this some kind of joke?! Why have you chosen chicken shops? What’s next, #KnifeFree watermelons?” Labor member of Parliament David Lammy tweeted.

He added to The Guardian that the Home Office “is pushing the stereotype that black people love fried chicken. This ridiculous stunt is either explicitly racist or, at best, unfathomably stupid.”

Shadow Home Secretary Diane Abbot tweeted, “Instead of investing in a public health approach to violent crime, the Home Office have opted for yet another crude, offensive and probably expensive campaign. They would do better to invest in our communities not demonize them,” the Guardian said.

Poll: Majority of Americans say there is an ‘invasion’ happening at the southern border, NPR blames ‘extreme rhetoric’ by Republicans for immigration concerns