SHENZHEN, China (AP) — Members of China’s paramilitary People’s Armed Police marched and practiced crowd control tactics at a sports complex in Shenzhen across from Hong Kong in what some interpreted as a threat against pro-democracy protesters in the semi-autonomous territory.

The sound of marching boots and synchronized shouts echoed from the grounds on Friday. Officers in green camouflage stood guard at closed entrances. A stadium security guard said “it wasn’t clear” when the paramilitary police would leave the grounds.

Chinese state media have only said that the Shenzhen exercises were planned earlier and were not directly related to the unrest in Hong Kong, though they came shortly after the central government in Beijing said the protests were beginning to show the “sprouts of terrorism.”

From a distance, police could be seen conducting drills in military fatigues, using shields, poles and other riot-control gear. In one exercise, two groups marched in formation with those in front raising shields as if to protect themselves from projectiles. Others behind held red flags and banners. The words “the law” and “prosecuted” could be seen on one.

Outside, dozens of armored carriers and trucks sat in the parking lot of the Shenzhen Bay Stadium, close to a bridge linking mainland China to Hong Kong.

Asked if Hong Kong police could maintain order or if mainland Chinese intervention is becoming inevitable, Hong Kong police commander Yeung Man-pun said that while they face tremendous pressure, “I can tell you we’re confident the police have the capability to maintain law and order.”

Germany, meanwhile, said it considers China to be a responsible actor that will respect Hong Kong laws guaranteeing freedom of speech and rule of law.

Government spokesman Steffen Seibert said Friday that Hong Kong’s 1997 Basic Law, under which the city was promised a high degree of autonomy when the former British colony returned to China, “is a Chinese law, and as such we naturally expect that the People’s Republic of China, too, won’t call into question the peaceful exercise of these rights.” 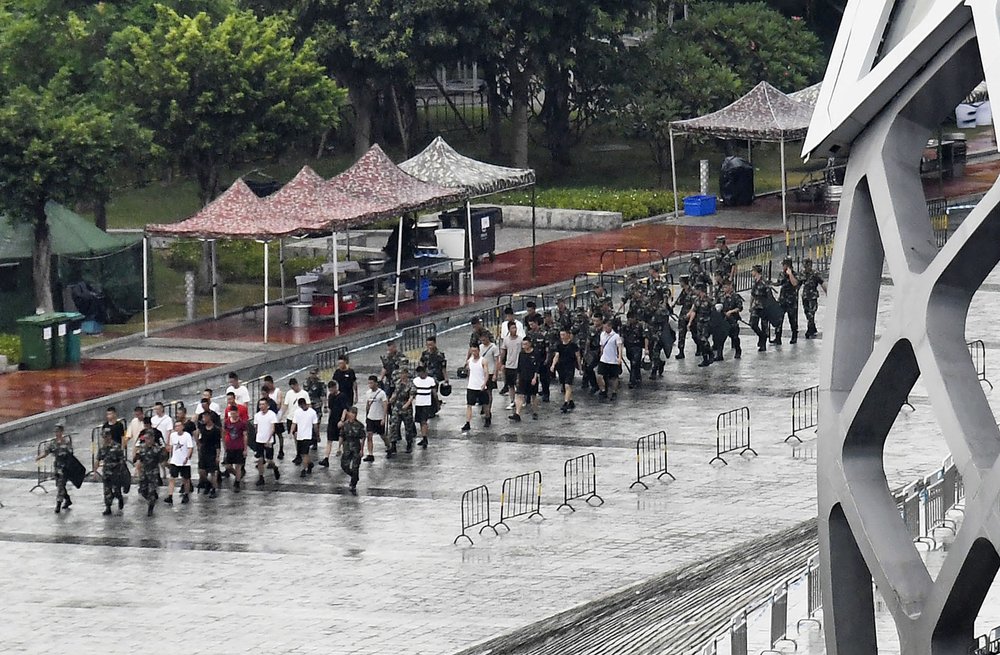 This Friday, Aug. 16, 2019, photo shows members of China’s paramilitary People’s Armed Police, in military fatigues and T-shirts, outside Shenzhen Bay Stadium in Shenzhen, China. Chinese police marched and practiced crowd control tactics at the sports complex in Shenzhen across from Hong Kong on Friday, in what some interpreted as a threat against pro-democracy protesters in the semiautonomous territory.(Madoka Ikegami/Kyodo News via AP)

Weeks of protests in Hong Kong have been marked by increasing violence and a shutdown of the Hong Kong airport earlier this week. The demonstrators are demanding expanded political rights and the scrapping of legislation that could have seen criminal suspects sent to mainland China.

A weekend of protests began Friday night with a university student-led “power to the people” rally in Chater Garden, a public square in the financial district.

A pro-democracy march is planned for Saturday along with a separate pro-government “Save Hong Kong” rally, ahead of a major pro-democracy rally called for Sunday. Police have denied permission for the march on Sunday, but protesters have ignored such denials in the past.

China has pressured foreign and Hong Kong companies to support the ruling Communist Party’s position against the protesters.

The CEO of Cathay Pacific Airways, one of Hong Kong’s most prominent companies, resigned Friday following pressure by Beijing on the carrier over participation by some of its employees in the anti-government protests. 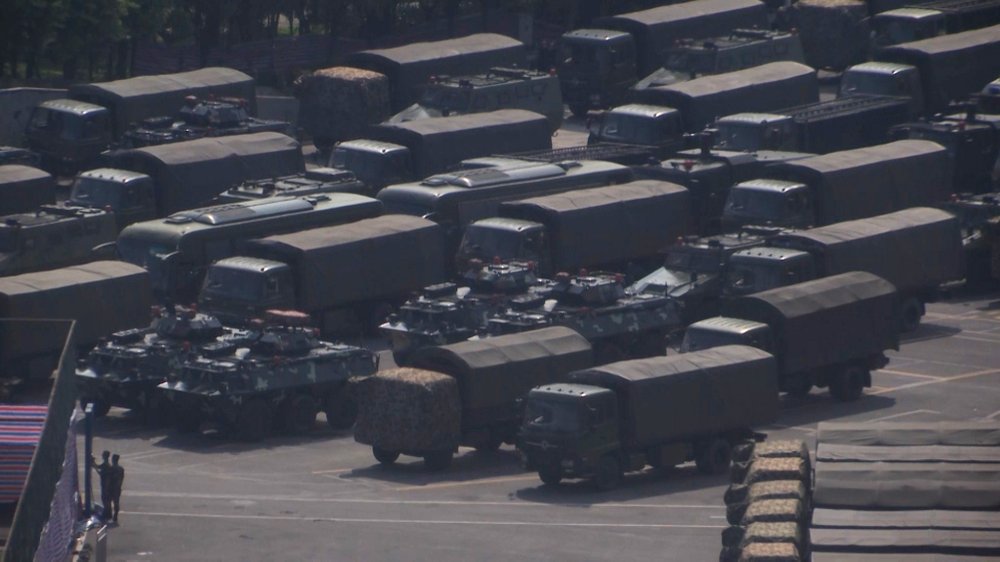 In this image made from video, armed police vehicles are parked outside Shenzhen Bay Stadium in Shenzhen, near Hong Kong, Friday, Aug. 16, 2019. Satellite photos show what appear to be armored personnel carriers and other vehicles belonging to the China’s paramilitary People’s Armed Police parked in a sports complex in the city of Shenzhen, in what some have interpreted as a threat from Beijing to use increased force against pro-democracy protesters across the border in Hong Kong.(AP Photo/Dake Kang)

The company chairman, John Slosar, said in a statement the airline needed new management because events had “called into question” its commitment to safety and security.

On Monday, Hogg threatened employees with “disciplinary consequences” if they took part in “illegal protests.′

On Friday morning, Frenchman Alain Robert, who has been dubbed “spiderman” for his unauthorized climbs of skyscrapers, hung a banner appealing for peace as he scaled the 62-story Cheung Kong Center, a landmark Hong Kong building that is the base for property tycoon Li Ka-shing’s business empire.

The banner showed the Chinese and Hong Kong flags over a handshake and a small yellow sun with a smiley face.

“The banner is to give joy and smile to the people of Hong Kong,” he told the AP as he sat in a taxi about to leave for his climb. He added that he didn’t want to get “mixed up in the political situation.”

Robert, 57, was taken to a police station afterward. It wasn’t immediately clear if he would be charged. He was banned in 2017 from returning to Hong Kong for one year after climbing another building.

Google Losing the Match: Will Shut Down ‘Stadia’ Gaming Service