House Democrats on Friday released text messages that shed new light on a possible surveillance campaign against Marie Yovanovitch when she served as ambassador to Ukraine.

The documents are screenshots of messages on the encrypted platform WhatsApp exchanged between Robert Hyde, a Republican congressional candidate, and an individual he identified Friday as Anthony de Caluwe.

The messages show that the man Hyde identified as de Caluwe appeared to provide updates in March 2019 on Yovanovitch’s activities in Ukraine.

Hyde emerged Wednesday as the latest player in the Ukraine saga when Democrats released a batch of documents messages supplied by Lev Parnas, a Soviet-born businessman who worked closely with Rudy Giuliani to collecting information about Yovanovitch. (RELATED: Pompeo Says State Department Will Investigation Yovanovitch Surveillance)

According to messages released on Wednesday, Hyde told Parnas in a March 23, 2019 text that “private security” was monitoring Yovanovitch.

“She’s talked to three people. Her phone is off. Computer is off,” he added.

The information that Hyde gave Parnas appears to match up with what de Caluwe told Hyde.

“Nothing has changed she is still not moving they check today again,” de Caluwe wrote Hyde from a Belgian phone number.

“It’s confirmed we have a person inside.”

“She been there since Thursday never left the embassy,” he wrote in another message.

Hyde sent many of the messages from de Caluwe verbatim to Parnas. 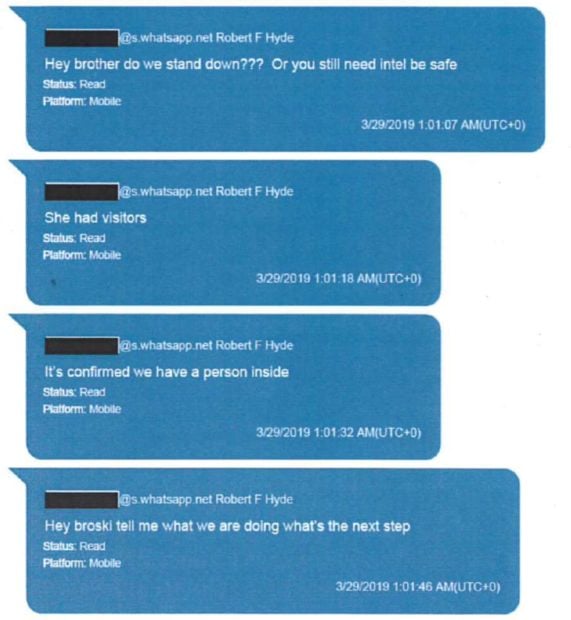 Hyde said in a video posted on his Twitter account that the messages he sent to Parnas were “copy and paste.”

“It was just copy and paste bullshit from some intel guy, probably, that was fucking with me, trying to set Trump up,” he said.

“Like I have anybody over in Ukraine. Are you serious?” he added.

It is unknown whether de Caluwe actually had visibility into Yovanovitch’s activities in Ukraine. He did not respond to multiple phone calls and emails on Friday.

The Ukrainian national police and U.S. State Department are investigating the potential surveillance against Yovanovitch.

The messages do not identify de Caluwe by name as Hyde’s interlocutor. But the avatar used in the messages match photos on de Caluwe’s Facebook account. The account includes numerous pro-Trump posts, including some with de Caluwe wearing “Make America Great Again” hats, and posing at the Trump International Hotel in Washington, D.C.

de Caluwe is also posed with Hyde in a photo at a Republican Party of Florida event. The post is dated Aug. 24, 2018.

De Caluwe, whose Facebook account says is based in Palm Beach, Florida, does not appear to be a big-time player in Republican politics or Trumpworld. Instead, his social media posts suggest he is one of numerous hangers-on who has been able to gain access to the Trump orbit.

De Caluwe’s profile on AngelList, a website for upstart businesses, lists his company as Track & Trace New IT Tech Company. A Belgian phone number listed on the page matches up with the number in the text messages with Hyde. GOPALAN: Iran’s Fake Apology Can’t Save It From The Long Arm Of International Law