Navy officials said Monday that the fire ravaging the amphibious assault ship Bonhomme Richard for a second day has reached temperatures as high as 1,000 degrees, and it is still burning in various portions of the ship.

Smoke and fumes continue to affect the skyline and air throughout San Diego.

Rear Adm. Philip Sobeck, the commander of Expeditionary Strike Group 3, said this morning that the fire is in the superstructure of the ship and its upper decks and that the ship’s forward mast has collapsed.

“There’s obviously burn damage all the way through the skin of the ship, and we are assessing that as we kind of go through each compartment,” he said. “Right now the priority is to get the fire out so that we can take a complete assessment.”

He said the flames are two decks away from the area in the ship where a million gallons of oil is stored. He said that is “a concern,” but he’s confident the fire can be kept away from it.

About 400 sailors and fire crews from across the San Diego waterfront are fighting the blaze and helicopters are doing water drops. As of midday, Helicopter Sea Combat Squadron 3 has dumped 415 buckets on board, he said.

Rear Admiral Philip Sobeck, Commander Expeditionary Strike Group 3 provided on Monday July 13, 2020 gave an update on information about the fire aboard the Bonhomme Richard at San Diego Naval Base.

Water from the firefighting is causing the ship to list to one side, he said, but Navy personnel are working to pump the water off.

The cause of the fire still is unknown. Sobeck said it may have begun in a cargo area known as the deep V storage area. There are large cardboard storage boxes, called tri-walls, that are the size of pallets that burned.

Sobeck said that although the ship was under maintenance, none of it was in the storage area.

And because the ship was under maintenance, its Halon system, which emits a gas that starves a fire of oxygen, was not active, he said.

So far, 36 sailors and 23 civilians have been treated mostly for minor injuries related to firefighting. None are in the hospital as of the Navy’s latest update Monday at 3:51 p.m. PDT.

Air quality issues are still a problem. Local residents report smelling smoke from as far away as Vista, which is more than 40 miles away. The skyline around the South Bay and Bonita area had a tinge of brown to it Monday morning.

Sobeck said he is urging people to take the precautions county air quality officials recommend. He said that plastics and the exteriors of cabling were burning.

San Diego County and the National Weather Service recommended people stay indoors with their windows closed if they smell the fire. High temperatures in San Diego Monday are expected to reach 77 degrees, a relief from Sunday when inland areas saw temperatures approaching 100.

The US Coast Guard said it is preemptively deploying a protective boom in a one nautical mile safety zone “to guard against any potential environmental concerns.” It also is restricting aircraft flight in the area from the water’s surface to 3,000 feet and warning neighboring marines to use other protective safety measures.

Local cities also have tried to prepare for emergency situations on Navy ships, such as a fire. As recently as six months ago, Coronado, San Diego, Federal Fire and the Navy participated in a three-day joint training at NAASCO, including shipboard training to learn how to interact with multiple agencies and to provide support, said Coronado Fire Chief Jim Lydon.

On Sunday Coronado sent a battalion chief and a fire truck, he said, and provided help inside the ship part of the day.

Some observers, including former sailors and Naval experts, have questioned on social media whether the Navy will scuttle the ship, but Sobeck said Monday he believes the Navy will ultimately repair the ship. 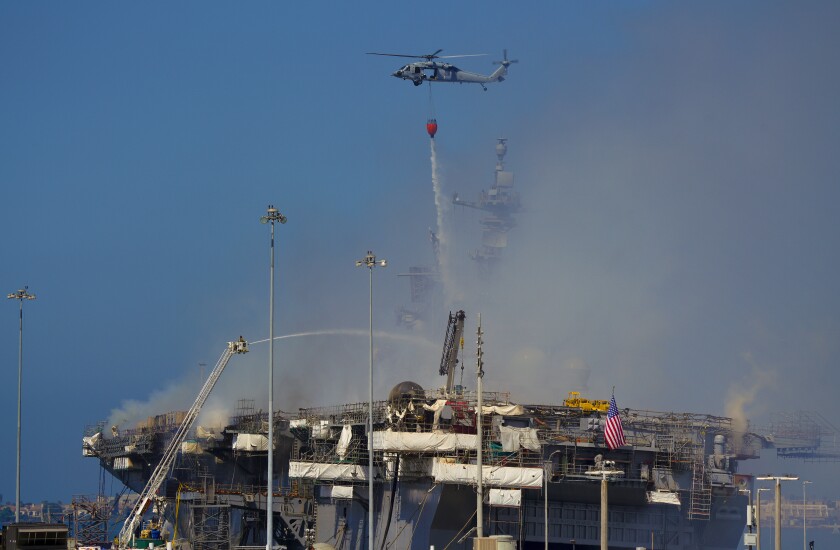 Late Monday morning the Navy used helicopters for water drops over the fire that continues to burn more than 24 hours later, aboard Bonhomme Richard at San Diego Naval Base.

Amphibious assault ships are used to deploy Marines in amphibious landings. During operations, the ships conduct flight operations with helicopters and jet aircraft, such as the AV-8B Harrier and its replacement, the F-35 B Lightning.

While deployed, these ships carry more than 2,000 sailors and Marines.

Sobeck said Sunday that all sailors are trained from boot camp to fight fires on ships.

This is one of the biggest fires on a Navy ship outside of combat.

In 1967, a fire on the aircraft carrier Forrestal killed more than 130 sailors after a rocket accidentally fired on the flight deck and ignited several explosions. The episode has been used as a lesson on how to tackle safety procedures aboard Navy vessels, Dukat said.

The George Washington, a nuclear-powered aircraft carrier, caught fire in 2008 when oil was improperly stored on the craft. At least 37 sailors were injured in the fire that took 12 hours to put out and cost $70 million in repairs.