The Pentagon Eyes a 500-Ship Navy, a 35% Increase From Its Current Size

WASHINGTON — The Pentagon’s upcoming recommendation for a future Navy is expected to call for a significant increase in the number of ships, with officials discussing a fleet as large as 530 hulls, according to documents obtained by Defense News.

Supporting documents to the forthcoming Future Navy Force Study reviewed by Defense News show the Navy moving towards a lighter force with many more ships but fewer aircraft carriers and large surface combatants. Instead, the fleet would include more small surface combatants, unmanned ships and submarines and an expanded logistics force.

Two groups commissioned by Secretary of Defense Mark Esper to design what a future Navy should look like suggested fleets of anywhere from 480 to 534 ships, when manned and unmanned platforms are accounted for — at least a 35 percent increase in fleet size from the current target of 355 manned ships by 2030.

The numbers all come from an April draft of inputs to the Future Navy Force Study conducted by the Office of the Secretary of Defense. While the number will likely have changed somewhat in final recommendations recently sent to Esper, the plans being discussed in April are notable as they reflect what will likely be major shift in the Navy’s future — and the expectation is that a larger-than-planned Navy based on the concepts laid out in the documents will remain intact in the final analysis.

Esper himself hinted at that in comments last week. In a speech delivered at the think tank Rand, the secretary called for a Navy of “over 350 ships,” specifically by increasing the Navy’s shipbuilding funding account.

“In short, it will be a balanced force of over 350 ships — both manned and unmanned — and will be built in a relevant time frame and budget-informed manner,” he said.

Indeed, the fleet compositions presented in the inputs broadly reflect the concept of a lighter fleet more reliant on unmanned or lightly crewed vessels that Esper described to Defense News in a February interview.

Sign up to get The Drift
Sign up for our weekly newsletter to go deeper into all things Navy with David Larter.
Enter a valid email address
Thanks for signing up!

Sign up for the Early Bird Brief, the defense industry’s most comprehensive news and information, straight to your inbox.

By giving us your email, you are opting in to the Early Bird Brief.

“One of the ways you get [to a larger fleet] quickly is moving toward lightly manned [ships], which over time can be unmanned,” Esper said then. “We can go with lightly manned ships, get them out there. You can build them so they’re optionally manned and then, depending on the scenario or the technology, at some point in time they can go unmanned.”

The Future Naval Force Study, overseen by Deputy Secretary of Defense David Norquist, kicked off in January after Esper decided he wanted an outside take on the Navy’s self-review of its future force structure. The OSD-led review tasked three groups to provide their version of an ideal fleet construction for the year 2045, one each by the Pentagon’s Cost Assessment & Program Evaluation office, the Joint Staff, the Navy and a group from the Hudson Institute.

Those fleets were war-gamed and the results were compiled into the Future Naval Force Study, which was briefed to Esper earlier this month. Ultimately, the Navy is using the feedback from the study to create their shipbuilding plan and fiscal 2022 budget request, the service said in a statement.

“The Future Naval Force Study is a collaborative OSD, Joint Staff and Department of the Navy effort to assess future naval force structure options and inform future naval force structure decisions and the 30-year shipbuilding plan,” said Navy spokesman Lt. Tim Pietrack. “Although COVID-19 has delayed some portions of the study, the effort remains on track to be complete in late 2020 and provide analytic insights in time to inform Program Budget Review 22.”

The April documents viewed by Defense News included notional fleets designed by CAPE and the Hudson Institute. Defense News did not have access to the Navy’s inputs into the FNFS. Neither fleet reviewed by Defense News, nor the fleet developed by the Navy, will be the final composition reflected in the FNFS. The numbers, however, provide a glimpse of the radically different future fleet likely to be reflected in the final analysis expected later this year.

Defense News reported on elements of the draft in April. 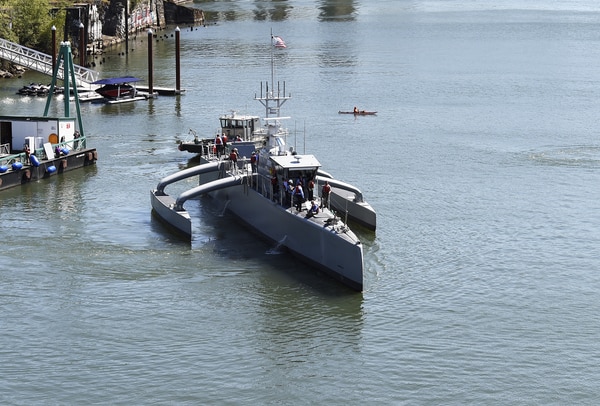 The U.S. Navy has been developing its tactics and procedures for employing unmanned surface vessels with the Sea Hunter drone developed by DARPA. (U.S. Navy)

The fleets designed by the CAPE and Hudson teams agreed on the need to increase the number and diversity of ships while boosting vertical launch system capacity — while also holding the operations and sustainment cost of the fleet as steady as possible and avoid adding to the number of sailors required to operate it.

As of the April drafts, both the CAPE and Hudson Institute teams were supportive of shrinking the number of supercarriers to nine from the current 11, which would effectively give the country eight active carriers, with one carrier always in midlife overhaul and refueling. The Hudson study also called for investing in four light carriers.

The CAPE fleet called for between 80 and 90 large surface combatants, about the same level as today’s 89 cruisers and destroyers. Hudson looked to reduce the number slightly and instead fund more lightly manned corvettes, something Hudson has called for in the past.

The reports called for between 65 and 87 large unmanned surface vessels or optionally unmanned corvettes, which the Navy hopes will boost vertical launch system capacity to offset the loss over time of the Arleigh Burke-class destroyers and the four guided missile submarines.

Both fleets also favored a slight increase in attack submarines over the current 66-ship requirement but reflected a big boost in large unmanned submarines, anywhere between 40 and 60 total. The idea would be to get the Extra Large Unmanned Underwater Vehicle to do monotonous surveillance missions or highly dangerous missions, freeing up the more complex manned platforms for other tasking.

On the amphibious side, both fleets reduced the overall number of traditional dock landing ships, such as the LPD-17, from the current 23 to between 15 and 19. As for the big-deck amphibious ships, CAPE favored holding at the current level of 10, while Hudson favored cutting to five, with the savings reinvested towards four light carriers.

The studies called for between 20 and 26 of the Marines’ light amphibious warships, which they need for ferrying Marines and gear around islands in the Pacific.

Both fleets significantly expanded the logistics force, with big increases coming from smaller ships similar to offshore or oil platform support-type vessels. The fleets called for anywhere from 19 to 30 “future small logistics” ships. The CAPE and Hudon fleets increased the number of fleet oilers anywhere from 21 to 31, up from today’s 17.

The Marines and Navy have talked about the need to rethink logistics for a more distributed fight in the Pacific.

The Hudson fleet called for a significant boost to the command and support ship infrastructure from today’s 33 ships to 52 ships. CAPE called for the fleet to remain about the same. Those ships include dry cargo ships, the expeditionary fast transports, expeditionary transfer docks and expeditionary sea bases.

All told, the fleets posited between 316 and 358 “traditional” ships, but when new classes and unmanned ships were lumped in, the fleet designs contained upwards of 500 ships or more.

In his remarks last week, Esper said the Navy would need to increase shipbuilding budgets to accommodate the transformation of the fleet, but it was unclear where the money would be coming from.

The Pentagon sought $207 billion for the Navy in its fiscal 2021 budget request. Even a 2 percent shift under that top line would represent $4.14 billion in extra funding for shipbuilding — real money, even by Pentagon standards.

In his remarks, Esper said the forthcoming study “will serve as our guidepost as we decide on, program and build out future fleet and conduct follow-on assessment in select areas.”

“We will build this fleet in such a way that balances tomorrow’s challenges with today’s readiness needs, and does not create a hollow Navy in the process,” Esper said. “To achieve this outcome, we must increase funding for shipbuilding and the readiness that sustains a larger force. Doing this, and finding the money within the Navy budget and elsewhere to make it real, is something both the Navy leadership and I are committed to doing.”