Former President Donald Trump is barely out of the White House, let alone declaring he will actually run for a second term. Yet, the starting gun was seemingly fired this week on the race to become the former president’s running mate in 2024, with advisers suggesting his best chance of reclaiming the office resides in choosing a black or female sidekick.

Trump’s spokesman was quick to deny that any such conversations are taking place at his post-presidential Mar-a-Lago residence, but the speculation will fuel a long-running conversation about how the Republican Party adapts to the country’s changing demographics and broadens its support.

“If Trump runs, whoever he picks as VP is going to have a claim on the presidential nomination in 2028,” said Robert Shapiro, professor of politics at Columbia University. “They’d be picking the next leader of the Republican Party, and it certainly makes sense from a demographic standpoint to pick a woman or a minority.”

Trump’s relationship with his first vice president reached the breaking point in January when Mike Pence refused to yield to his demands that he try overturning the election result when he presided over the congressional count of Electoral College votes, which easily went to now-President Biden.

On Wednesday, Bloomberg reported that close advisers were telling Trump to exclude Pence from a possible 2024 ticket. Instead, they raised the possibility of a black or female vice president, with two backing South Dakota Gov. Kristi Noem, who is popular with the Trump base.

FILE – In this Sept. 7, 2018 file photo President Donald Trump appears with Gov. Kristi Noem in Sioux Falls, S.D. South Dakota officials said Wednesday, Aug. 12, 2020, they plan to erect a security fence budgeted around the official governor’s residence to protect Noem. Noem’s office did not give specifics on any threats. The South Dakota Republican has championed a hands-off approach to managing the coronavirus crisis and also raised her national political profile in the past year, including tying herself more closely to Trump. (AP Photo/Susan Walsh, File)
Susan Walsh/AP

A day earlier, Trump endorsed South Carolina Sen. Tim Scott’s reelection. He is the only black Republican in the Senate.

The Bloomberg report was dismissed as “fake news” by Trump spokesman Jason Miller.

But analysts say it makes sense for the party to consider how to expand its coalition next time around.

Costas Panagopoulos, chairman of Northeastern University’s Department of Political Science, said: “Women and minorities are a clear vulnerability [for Republicans electorally], so any efforts to make inroads with these segments of the voting population could be helpful. But GOP policies will also need to be calibrated to support these groups. Otherwise, such choices could be viewed as superficial and purely politically motivated and could backfire.” 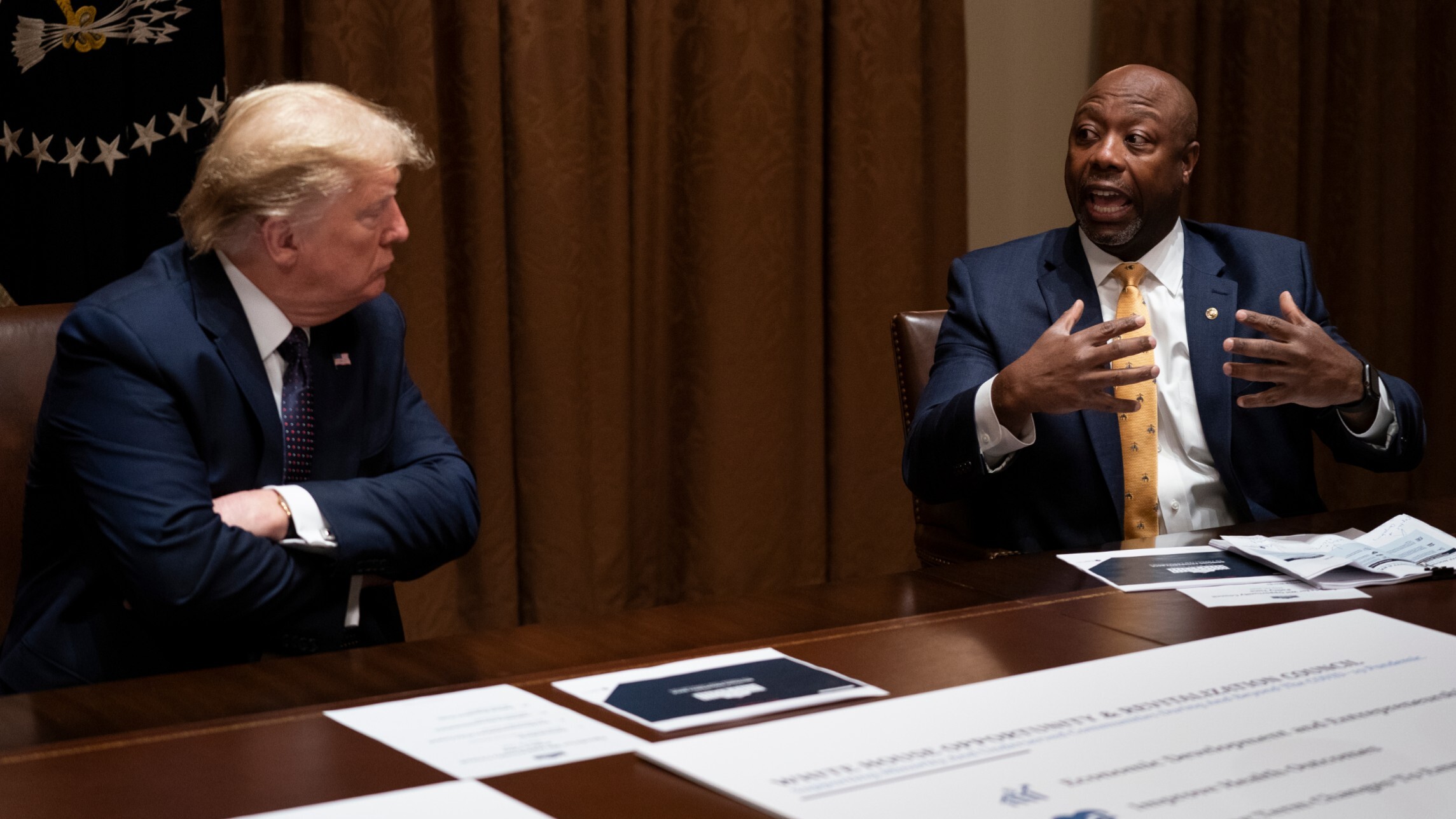 The party has grappled with those questions since 2013 when it published an “autopsy” of its performance a year earlier, along with a roadmap designed to increase outreach to women, black, Asian, Hispanic, and gay voters.

Yet, the rise of Trump, with his mostly white voter base and divisive policies on immigration, including a southern border wall, and law and order, seemed to buck the election postmortem assessment’s recommendations.

Even so, reports surfaced frequently in the run-up to last year’s election that Trump was considering ditching Pence in favor of Nikki Haley, his first ambassador to the United Nations. Recently, she called for the party to move beyond the 45th president over his role in the Jan. 6 Capitol riot, which was carried out by some of his backers.

“It’s too late for Mr. Trump to revamp his political personality,” wrote Andrew Stein in the Wall Street Journal. “But with the 2016 election in the past, Nikki Haley on the ticket could tamp down the antipathy for Mr. Trump that seems to afflict so many moderate and Republican-leaning women.” 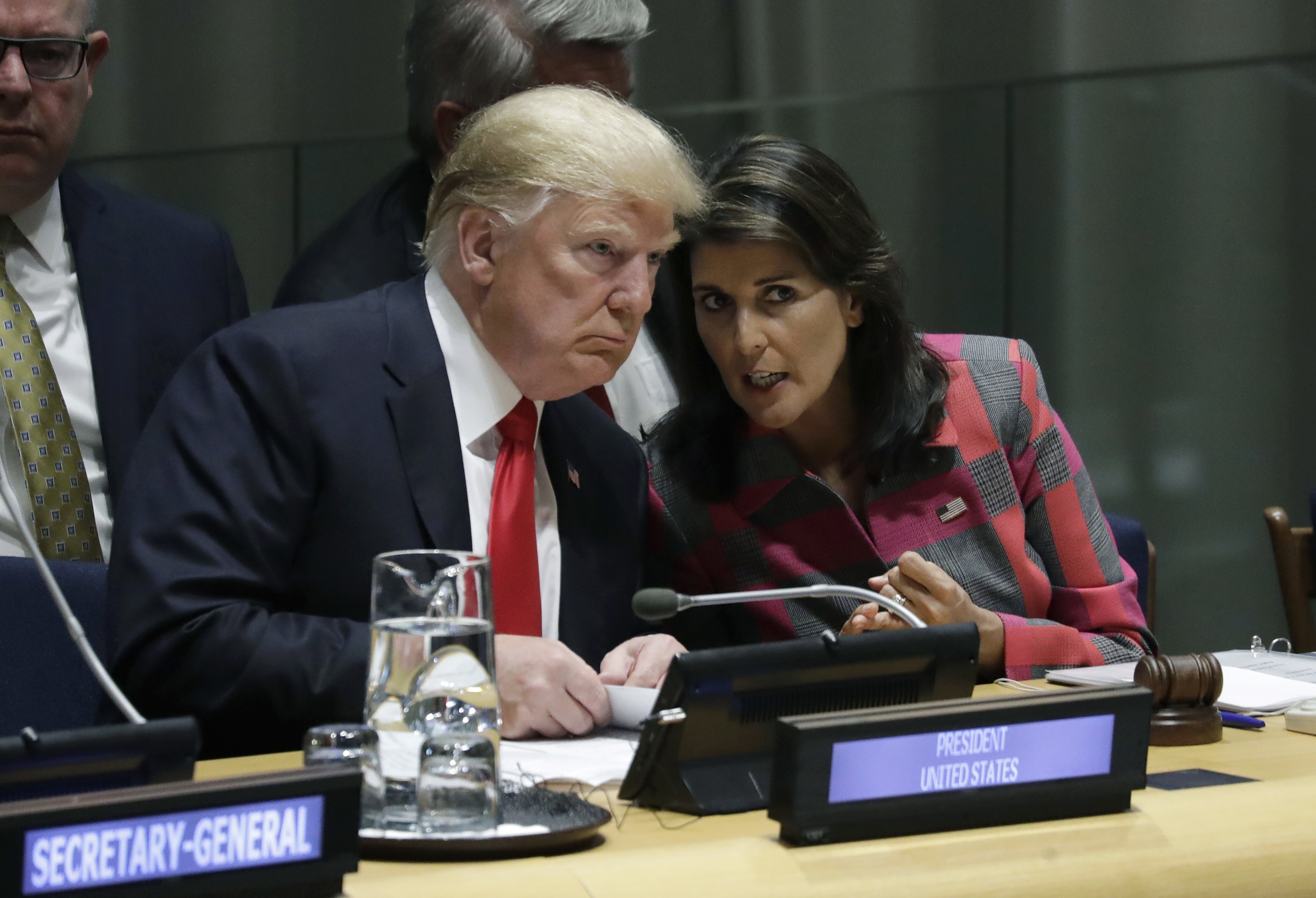 FILE- In this Sept. 24, 2018 file photo, President Donald Trump talks to Nikki Haley, the U.S. Ambassador to the United Nations, at the United Nations General Assembly at U.N. headquarters. Congressional and Trump administration officials told The Associated Press that Haley plans to resign. She was appointed to the U.N. post in November 2016. (AP Photo/Evan Vucci, File)
Evan Vucci/AP

Trump’s long-chronicled trouble with women was one of the key stories of last year’s campaign, at times overshadowing his improved performance with other key demographic groups.

Exit polls found that black, Hispanic, and Asian American voters all moved toward the Republican nominee in November compared with 2016. But he still lagged far behind Biden in all three groups — by 75, 33, and 27 percentage points respectively, according to a Brookings Institution analysis.

And the numbers went in the opposite direction among white voters and women, with Biden winning a higher percentage of each compared to Hillary Clinton in 2016.

Picking a female vice president is one way of trying to turn that around, in much the same way that nominees have long used their running mate to bring balance to a ticket. Trump did it himself with Pence in 2016, sending a clear signal to conservatives and evangelicals who might have been nervous about voting for a twice-divorced reality TV star.

But there are limits. Michael Johns, a Trump supporter and prominent Tea Party commentator, said the vice president was rarely a major consideration for voters, but he or she could help define an administration’s ideology and operation once in power.

“It would be presumptuous, I think, to believe that a woman or African American would be impactful in improving support in those constituencies,” he said. “Sarah Palin, for instance, did not aid John McCain with women in 2008. Voters look at the president and anticipated policies.”

But he said Pence’s actions had disappointed the MAGA base, adding: “I think that’s the main consideration.”