MAY 4–A 77-year-old retiree who was upset about the thickness of the tomato on her Whopper allegedly threw the sandwich at a Burger King employee and then spewed racial slurs at the worker, according to Florida police who arrested the septuagenarian on a felony charge.

Investigators say Judith Black became unruly Friday evening at a Burger King near her home in The Villages, the sprawling retirement community billed as the Sunshine State’s “friendliest 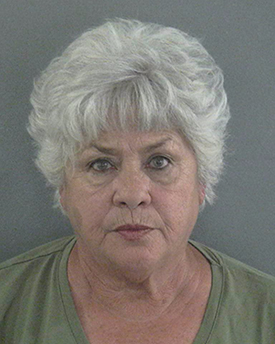 Black was dismayed with the tomato on her Whopper sandwich, according to a police report that does not specify whether the accused sought more or less tomato. Black, seen at right, took her complaint to the restaurant’s front counter, where she allegedly began yelling at a female employee.

The worker told police that she explained to Black that unless her harangue ceased, she would not be able to help with the tomato issue. Then, when the employee turned her back, Black threw the Whopper, striking the worker below her neck with the sandwich.

Black, cops allege, then proceeded to tell the worker, “Shut up you black bitch.” She also allegedly used the N-word after exiting the Burger King with her husband.

When police later questioned Black about the Burger King incident, she reportedly admitted striking the worker with the Whopper, explaining that she was “upset about the thickness of the tomato on her sandwich and confronted the victim at the counter.” Cops say Black also admitted that she called the employee a “stupid black bitch” and a “black nigger,” and declared, “fuck you black niggers.”

Witness interviews and store surveillance footage corroborated the employee’s account of her interaction with Black, as well as the customer’s use of racial slurs, according to a Wildwood Police Department report.

Normally, a hamburger attack would result in the alleged assailant being charged with misdemeanor battery. But since Black allegedly used racist language, the battery count was reclassified as a felony. Florida statutes allow for such an enhancement if the defendant evidences prejudice while committing an offense.

Black spent several hours in custody before being released early Saturday morning from the Sumter County jail on $2500 bond. (2 pages)