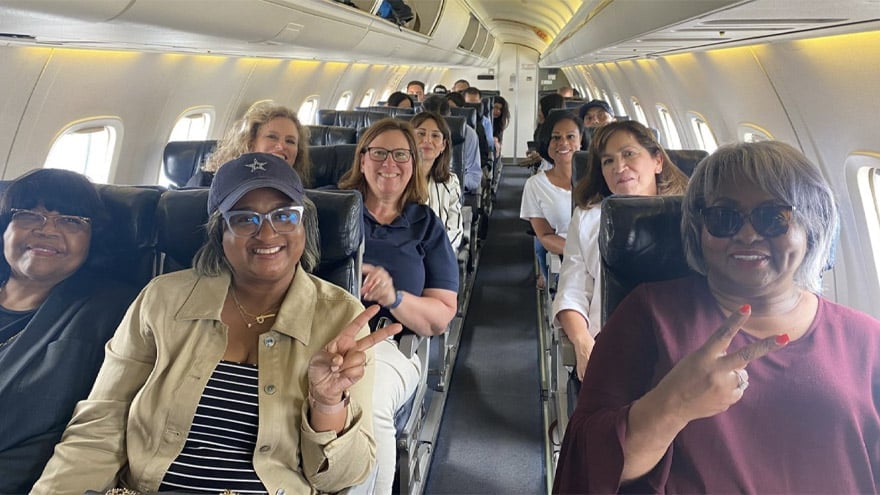 Vice President Kamala Harris backed Texas Democrats Wednesday who fled the Lone Star State to stop a voting integrity bill from making its way through the Capitol in Austin; calling them “bold” and “courageous.”

“They took bold, courageous action in line with the legacy of Frederick Douglass, to the legacy that involves women who marched down Pennsylvania Avenue, and all those folks who shed blood on the bridge in 1965 to pass the Voting Rights Act,” Harris said Wednesday.

“And now, we have in 2021, the Texas Legislature,” she continued. “Many of them traveled to Washington, D.C., at great sacrifice to stand up for the American right to vote, unencumbered.”

Texas Democrats faced growing scrutiny on social media this week after posting a picture aboard a chartered jet showing the liberal lawmakers enjoying their flight to the DC Swamp without COVID face-masks.

“ON PLANE TO DC: Texas Democratic lawmakers are leaving state to break quorum to stop Republican voting bill. Veteran Capitol observers say this is unchartered territory. Photo from Democrat on the plane. http://NBCDFW.com,” posted a reporter with NBC Dallas.

To avoid a vote, Texas Democrats jet off to DC on privately chartered planes — maskless, unlike all the little people who fly commercial. What a look. https://t.co/fLkcakHKbn

“To avoid a vote, Texas Democrats jet off to DC on privately chartered planes — maskless, unlike all the little people who fly commercial. What a look,” added Fox News contributor Guy Benson.

Watch the bizarre moment above.

BERNIE BOILS: ‘Am I Supposed to Be Impressed That a Billionaire Went to Space?’

THE MOST BUSTED NAME IN NEWS: CNN in Ratings Free-fall, Zucker Did ‘Permanent Damage,’ Ex-Producer Says

JABS FOR JOBS? Biden Claims Vaccine Mandates the ‘Most Powerful’ Stimulus in History