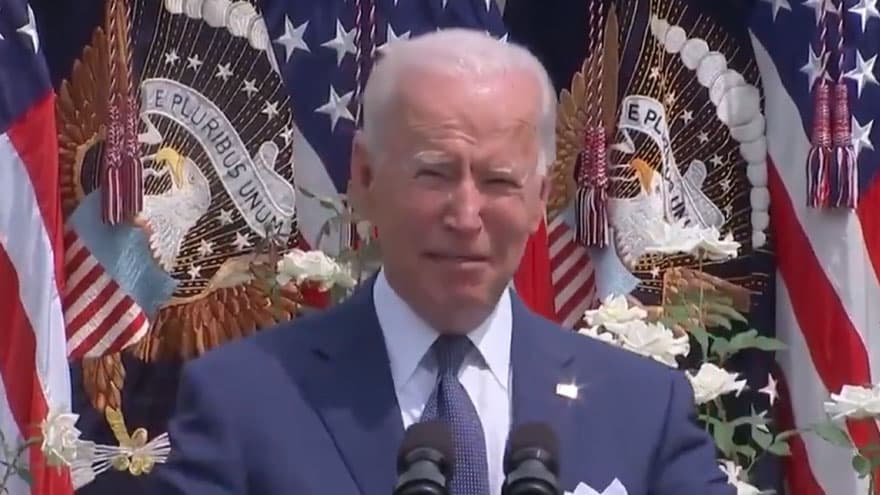 Joe Biden launched into a bizarre speech this week where he apparently forgot the name of a Member of Congress before asking about the location of a guest’s mother.

“Congressman Scott, Congressman, … where is he? There you are… You understand this better than anybody does. I want to thank you Congressman for all your work,” said Biden.

“I want to thank you all for being here… By the way, where’s mom? Is she here? She’s watching, oh okay. I thought they looked and said mom was out there. I was going to ask her to stand up. But mom, you can’t stand up if you’re home,” added the President.

Joe Biden forgets a congressman’s name, then confuses whether a guest’s mother is attending the event.

Former White House physician and current Congressman Ronny Jackson is demanding President Biden take a cognitive mental examination as soon as possible; suggesting he may be forced to resign over his inability to properly executive his official duties.

“He’s completely LOST it!” Jackson tweeted Saturday with a video clip in which Biden responds to a reporter’s question by asking if Republicans believe he is “sucking the blood out of kids.”

“Our cities are EXPLODING with drugs & violence because of Democrat ‘defund the police’ policies and the GREAT UNITER Joe Biden deflects to talk about ‘sucking blood out of kids.’ He’s completely LOST it! Needs a cognitive exam NOW!” posted the Texas lawmaker.

Our cities are EXPLODING with drugs & violence because of Democrat “defund the police” policies and the GREAT UNITER Joe Biden deflects to talk about “sucking blood out of kids.” He’s completely LOST it! Needs a cognitive exam NOW!
pic.twitter.com/ot3ZwUc2Bf

“This is a national security issue at this point,” Jackson told Fox News host Sean Hannity on Thursday.

Watch the bizarre moment above.

‘NO QUIET PLACE ON EARTH FOR YOU, EXCEPT FOR THE GRAVE’: Zelenskyy Vows to Hunt Killers of Ukrainian Family