Once performed procedure in room at LA QUINTA INN…

JULY 29–An elderly Florida Man today copped a plea to felony charges in connection with his bloody, botched castration of a man he met on a eunuch website, a crime for which he will be sentenced to three years in prison, according to court records.

During a Circuit Court hearing this afternoon, Gary Van Ryswyk, 76, pleaded no contest to unlicensed practice of a health care profession resulting in serious bodily injury. He entered a similar plea to a second, lesser felony charge.

A plea agreement signed by Van Ryswyk and his lawyer indicates that the septuagenarian fetishist will be sentenced later this year to three years in state prison. The top count to which Van Ryswyk pleaded carries a maximum 15-year term of incarceration.

Since Van Ryswyk will be credited for the time he spent in a county jail before making bond in November 2020, he will likely serve around two years in state custody.

A detailed account of the at-home castration Van Ryswyk performed in August 2019 on the victim, now 55, is contained in the prosecution’s case file, which was provided to TSG in response to an open records request. Along with crime scene photos and police reports, the records include recorded interviews with Van Ryswyk and the victim, a hardware store 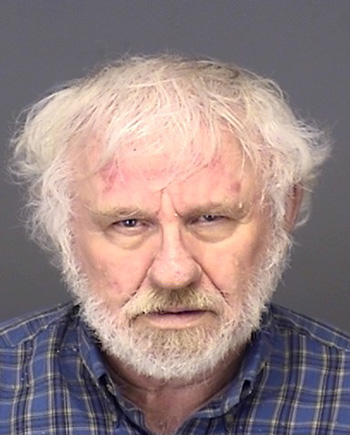 Police discovered Van Ryswyk’s amateur surgery setup after a 911 hangup call was traced to his home in Sebring, a central Florida city. Upon arriving at the three-bedroom residence, cops were met at the front door by Van Ryswyk, who explained that he had just performed a castration inside the 1344-square-foot property.

The patient was in a rear bedroom, where he was bleeding uncontrollably and “holding a bloody towel to his groin region,” police noted. The man had driven about 100 miles to Van Ryswyk’s home from St. Petersburg, where he lived and worked.

The man’s testicles–removed during a procedure that took several hours–were in a pink container atop a bedside table in the makeshift operating room.

Blood was all over the bedroom floor and on the plastic sheet covering the bed. A plastic garbage can was overflowing with blood-soaked gauze. Atop a dresser was an assortment of surgical sutures, bandages, disinfectant wipes, peroxide, topical antiseptics, and a container of hemostatic powder used to treat minor cuts and wounds suffered by dogs and cats.

Elsewhere in the room was a Nikon camera on a tripod that Van Ryswyk (seen above) used to record the castration. He planned to upload the video post-op, but it was seized during a police search of his home. During the raid, investigators took possession of a wide array of medical tools, many of which were covered in blood. Along with scalpels, clamps, hypodermic needles, and forceps, cops confiscated a surgical stapler, rubber tourniquets, a soldering iron, and “an assortment of skinning and filet knives.”

Asked by a detective about his extensive surgical tool collection, Van Ryswyk answered, “I kinda like medical stuff.” When the cop asked, “Is that another fetish for you or what?” Van Ryswyk replied, “I suppose you might call them a fetish. I’m kind of a prepper type, you know.”

Van Ryswyk and the victim told police that they met on the UK-based Eunuchmaker website. The victim said Van Ryswyk once told him he had performed 25 castrations, but later said he had “only done it about four times.” The man, who

described his castration as a “consensual” encounter, initially told cops that he did not want to pursue charges against Van Ryswyk.

Questioned about his prior experience, Van Ryswyk told police that he had done two other castrations, one of which he performed on himself. Without the aid of painkillers, Van Ryswyk said, he removed his right testicle in 2012. Van Ryswyk, who grew up on a farm in Minnesota, said that he had castrated some bulls and had experience hunting and skinning small animals.

By the time he commenced his third castration, Van Ryswyk’s eyesight was fading. His hearing was also diminished, which he said dated back to his Army service in Vietnam, where he suffered “artillery ears.”

Van Ryswyk’s tentative manner was immediately apparent to the victim. When a detective asked if there was a point during the castration that he wondered whether Van Ryswyk knew what he was doing, the man said, “Yeah, like right away.” He added, “He was constantly fumbling and dropping stuff.”

The victim told police that Van Ryswyk estimated that the castration would take 30 to 45 minutes. Instead, the procedure stretched to three hours, as Van Ryswyk could not control the man’s bleeding. There was so much blood, Van Ryswyk told police, that he had difficulty seeing the wound clearly enough to stitch it shut.

After being rushed to a local medical center, the victim was flown by helicopter to Tampa General Hospital’s trauma unit “for life saving measures.” The man told police that he regretted the castration and was having suicidal thoughts.

Following his arrest, Van Ryswyk insisted to police that, besides removing his own testicle, he had only performed one other castration. The patient was a Florida man named Scott who used the online chat handle “Wanna Be Dickless.”

The 2017 procedure, Van Ryswyk recalled, occurred in a room at a La Quinta Inn six miles from his home. Asked by a detective how the hotel surgery went, Van Ryswyk replied, “Not well.” Van Ryswyk explained that he could not stop Scott’s bleeding, prompting the patient to seek treatment at a hospital emergency room (where Scott made no mention of Van Ryswyk).

A police search of Van Ryswyk’s computer equipment turned up a file labeled “Scott” that contained an “image of a person, wearing surgical gloves, holding up a testicle.” The photo was captioned “Scott’s right nut.”

“I only did one testicle on him,” Van Ryswyk told police as he recounted Scott’s castration. At the time of the procedure, Van Ryswyk said, his wife Ethel thought he was at chorus practice. During police questioning in 2019, Van Ryswyk said that it had been a year since his 38-year marriage ended in divorce.

The hotel castration, Van Ryswyk claimed, was hampered by the darkened state of the room. “The lighting was really poor in the La Quinta,” he said. “You know, I mean they’re more for romance than they are for surgery.”

Van Ryswyk recalled he was confident that the castration of the man he met on Eunuchmaker would be a success, especially since the lighting was so much better in his spare bedroom/operating suite.

“Well, I thought that I knew how to do everything fairly good,” Van Ryswyk told a detective as other cops searched his home. (3 pages)