‘TRY AND TAKE THIS’: Olympic Athlete Who Made ‘X Gesture’ Dares Committee to Take Her Medal 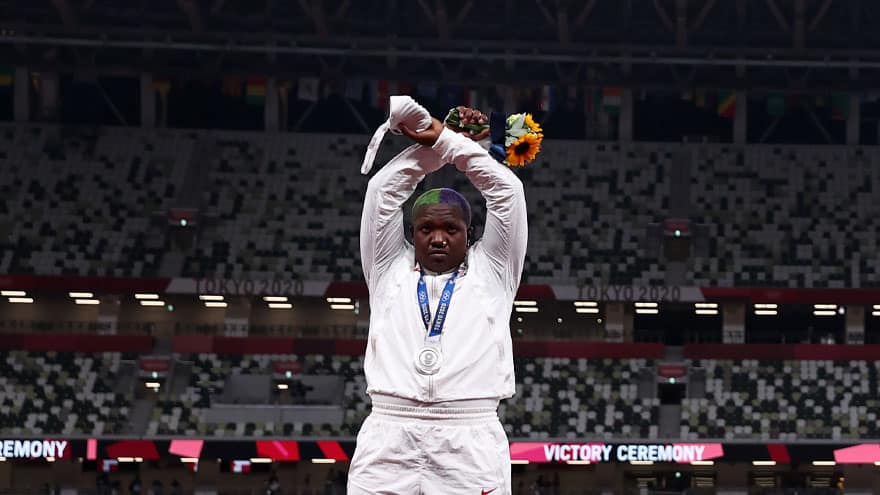 The 2020 Tokyo Olympics continued to hemorrhage viewers this week, with new data showing total viewership for the network’s primetime coverage down 49% compared to the equivalent night at the 2016 Games in Rio de Janeiro.

Variety’s top TV editor writes, “Traditional TV viewing for the Summer Games has declined noticeably, and, a decision by popular gymnast Simone Biles to take herself out of the team competition early Tuesday has spurred advertiser anxiety, according to executives familiar with negotiations between NBC and sponsors. Not helping matters: Her exit came within hours of tennis star Naomi Osaka’s ouster from the tennis medal competition.”

“Viewership for Friday night’s opening ceremonies came to around 17 million viewers, according to Nielsen , marking a decline of approximately 36% from the audience for the company’s 2016 broadcast of an opening ceremony for the Summer Games in Rio. Viewership has improved for each primetime broadcast following, but the size of the declines from the previous Rio Olympics have unnerved advertisers, who are believed to have invested more than $1.2 billion in the sports extravaganza,” adds the editor.

American all-star athlete Simone Biles publicly explained her decision Tuesday to abruptly exit a competition at the 2020 Olympics in Tokyo; saying she suffered no physical injury but was “dealing with a few things.”

“It’s been a really stressful Olympic Games as a whole; not having an audience — there are a lot of different variables going into it [the Games],” she said. “It’s been a long week; it’s been a long Olympic process/year. I think we’re a little bit too stressed out. We should be out here having fun, and sometimes that’s not the case.

“Today has been really stressful, we had a workout this morning; it went OK but during that five-and-a-half hour wait I was shaking – I could barely nap. I had never felt like that going into a competition before. I tried to go out here and have fun; the warmup in the back went a little bit better but once I came out here I was like, ‘no, mentals [sic] not here so I just need to let the girls do it and focus on myself.’”

Biles is still eligible to compete in other competitions.

Read the full report at Variety.

The 2020 Tokyo Olympics set to take place this summer will be delayed at least one year to slow the spread of the deadly Coronavirus; marking the first postponement in modern history.

“In the present circumstances and based on the information provided by the WHO today, the IOC President and the Prime Minister of Japan have concluded that the Games of the XXXII Olympiad in Tokyo must be rescheduled to a date beyond 2020 but not later than summer 2021, to safeguard the health of the athletes, everybody involved in the Olympic Games and the international community,” a joint statement from the IOC and the Tokyo 2020 organizing committee said.

“We have agreed that the Tokyo Olympics and Paralympics will be held by the summer of 2021 at the latest,” said Japanese Prime Minister Shinzo Abe.

“In the present circumstances and based on the information provided by the WHO today, the IOC President and the Prime Minister of Japan have concluded that the Games of the XXXII Olympiad in Tokyo must be rescheduled to a date beyond 2020 but not later than summer 2021, to safeguard the health of the athletes, everybody involved in the Olympic Games and the international community,” added the statement.

More than 500,000 visitors are scheduled to attend the international competition from over 100 countries.

DeSANTIS STEPS IN: FL Gov Writes to Biden, Urges US to ‘Provide Internet Access’ Into Cuba

THIS IS REAL: Pelosi Says She Has No Idea Where ‘Attitude of Lawlessness’ in San Francisco Comes From

100% KENNEDY: Biden’s Immigration Plan Like ‘Giving Whiskey and Car Keys to a Teenager’