WATCH: Psaki Clams-Up When Asked Why Biden Joked About Americans Stranded in Afghanistan 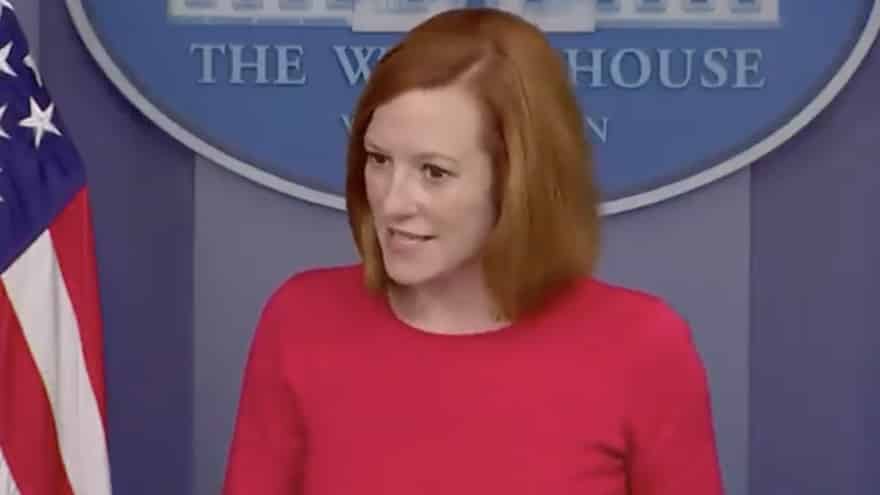 “At the tail end of the President’s remarks today about cyber security, he was asked about Afghanistan and he made a joke… So, what’s so funny?” asked Fox News’ Peter Doocy.

“What he conveyed is that, he uh, he has not, well, what I can convey from here, is that we’re on track to complete our mission by August 31st,” said the Press Secretary.

President Biden continued to deflect questions surrounding his withdrawal from Afghanistan Wednesday when the White House turned off the Commander-in-Chief’s microphone as journalists shouted questions about the safety of Americans in Kabul.

“Thank you all very much, and I thank the press for being here. We’re going to go private now,” said the President.

“Mister President, what will you do if Americans are still there after the deadline?” pressed one journalist.

The White House turned off the President’s microphone at that moment.

“I asked President Biden what he will do if Americans are still in Afghanistan after the 8/31 deadline,” posted New York Times reporter Peter Alexander. “His response: ‘You’ll be the first person I call.’ Took no questions.”

I asked President Biden what he will do if Americans are still in Afghanistan after the 8/31 deadline.
His response: “You’ll be the first person I call.”
Took no questions. pic.twitter.com/MlyFIayrMZ

A reporter asks President Biden what he will do if Americans are still in Afghanistan after the deadline.

‘You’ll Be The First Person I Call’: Biden Jokes When Pressed On Plan For Americans Left Behind In Afghanistan https://t.co/I8673J2n9W

House Minority Leader Kevin McCarthy issued a dire warning after receiving a classified briefing on Afghanistan Tuesday; saying he’s “less confident” all Americans can be evacuated from Afghanistan before the Taliban’s August 31st deadline to remove all US Troops.

“I’m less confident after leaving that briefing. There’s no possible way that we can get every American that’s still in Afghanistan out in the next seven days,” McCarthy said.

“At no time should America ever bend or allow the Taliban to tell us when we have to stop bringing Americans out. We should stay until every single American is able to get out of Afghanistan. And we should use every recourse possible to make that happen,” McCarthy continued.

DeSANTIS: ‘I Will Continue to Fight for Parents’ Rights’