NO BLINKEN CLUE: Sec of State Shocked the Taliban Won’t Allow Charter Flights Out of Afghanistan 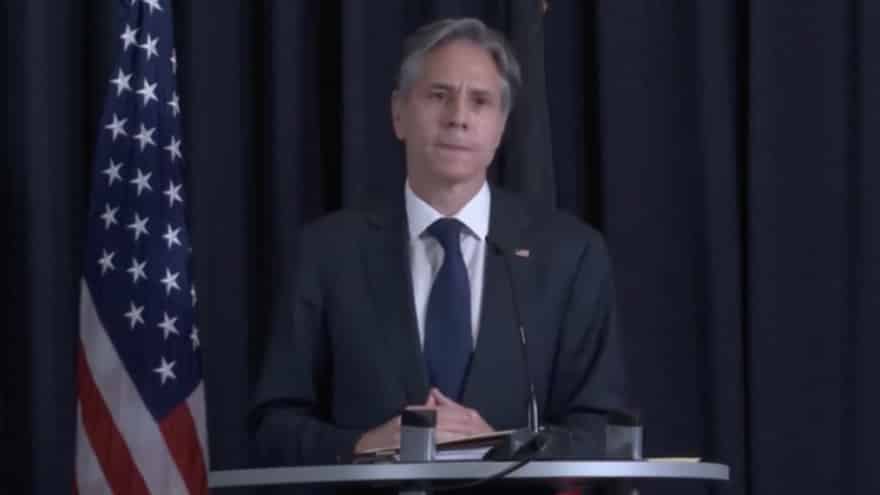 BLINKEN: The Taliban Has ‘Assured People in Afghanistan’ They Can Leave After August 31st

Secretary of State Antony Blinken doubled-down on the Biden administration’s reliance on the Taliban over the weekend; saying a senior member of the group has “assured” people they can leave Afghanistan after the US military departs on August 31st.

“Just yesterday, a very senior Taliban official went on television and radio across the country and repeatedly assured people in Afghanistan they will have freedom to travel after August 31st,” said Blinken.

“We don’t take the Taliban at their word, we take them by their deed,” he added. “

“After August 31st, for people still on the ground in Afghanistan who want to get out, does the US right now have a vision of a process that they will use to get them out after August 31st . What’s the commitment? Is it absolute? If you want to get out… Is the US guaranteeing you will be able to get out?” asked one reporter.

“I don’t think we can guarantee,” said Psaki.

Biden Press Secretary Jen Psaki: “I don’t think we can guarantee” Americans who want to get out will get out of Afghanistan after August 31 pic.twitter.com/pJn8m1fRZx

NO BLINKEN CLUE: Sec of State Was Vacationing in the Hamptons When Kabul Fell to Taliban

Secretary of State Antony Blinken was busy vacationing in East Hampton, New York as the Taliban seized control of Kabul earlier this month, according to a report from the New York Post.

“Despite warnings that Kabul was at risk of collapse, Secretary of State Antony Blinken was vacationing in the Hamptons just hours before the Taliban invaded the Afghan capital and toppled the government,” writes the NY Post.

“But Blinken and other top Biden administration officials — who expected the Afghan government to hang on for weeks — had to be called back to Washington, DC,” adds the Post.

Blinken was vacationing in the Hamptons hours before Kabul fellhttps://t.co/ehLGpAV4Tq

Republicans in the House of Representatives introduced Articles of Impeachment against Secretary of State Antony Blinken last week over his role in the botched withdrawal of American forces from Afghanistan.

“Secretary Blinken has failed to faithfully uphold his oath and has instead presided over a reckless abandonment of our nation’s interests, security, and values in his role in the withdrawal of American forces and diplomatic assets from Afghanistan,” reads the articles.

“In direct conflict with the intelligence and advice provided by his own diplomats and the intelligence community, Secretary Blinken failed to advise and counsel the President accordingly and did not inform the Congress nor American citizens at home and abroad of the dangers,” add the articles.

“Under the Constitution of the United States of America, the Secretary of State is tasked with informing Congress and American citizens on the conduct of U.S. foreign relations,” said Rep. Ralph Norman in a statement provided to Fox News.

“In Afghanistan, he failed to do so, leaving American citizens exposed in a city under the control of the Taliban. Secretary Blinken is also responsible for the safety of American citizens abroad and, in the case of danger, the safe and efficient evacuation of those Americans – which he has not done thus far.”

DON DOMINANT AT CPAC: Straw Poll Shows Trump Getting 59% of the Vote, DeSantis 28%

MISSION OF A LIFETIME: Combat Vet and Wife Help Soldiers Suffering from PTSD

REPORT: Biden ‘Secretly’ Flying Migrants into US ‘In the Dead of Night’

FLASHBACK 2 WEEKS: Biden Says ‘We’re Going to Stay’ Until All Citizens Are Out of Afghanistan