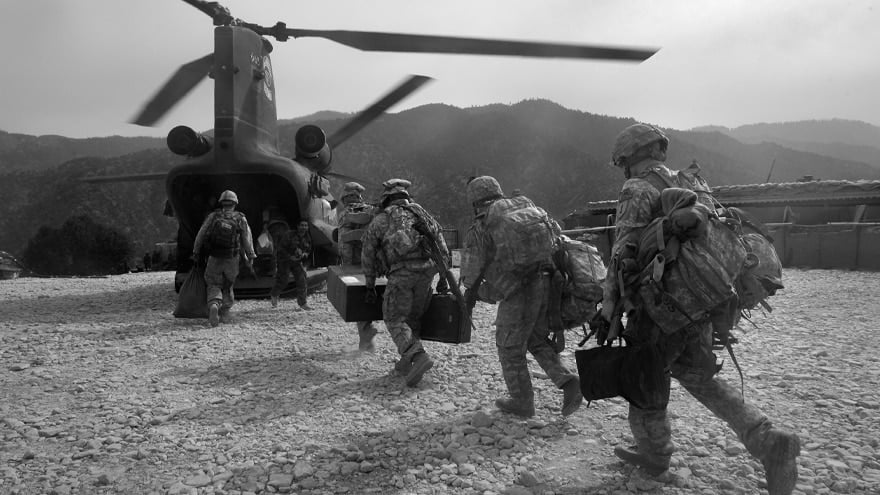 Singer and songwriter John Ondrasik -known better as Five for Fighting- released a new song this week called ‘Blood on My Hands’ to highlight the tragedies occurring in Afghanistan since the Taliban seized control in August.

Ondrasik has sold more than 2.5 million albums, including the platinum hit-single ‘Superman.’

“To this day, I don’t understand the lack of an outcry, especially from the music community,” Ondrasik said in a Monday morning interview. “Where are the benefit concerts? Where are the protest songs, the protests outside the White House? This is why I think tribalism has corroded our souls. . . . Why isn’t Fawad [Andarabi] on the cover of Rolling Stone?”

“She said, ‘I’m organizing evacs for AmCits, LPRs, and SIVs,’ and she’s spitting out all these acronyms,” Ondrasik recalled. “I asked, ‘What’s an AmCit?’ and she said, ‘That’s an American citizen.’ I said, ‘You’re going to risk your life, and private citizens like you are going to do the same, to rescue Americans we left behind?’ And this is a tough person, and she started crying, and she said yes. I thought, ‘What is happening? What world are we living in?’”

“Like all Americans, I was stunned and horrified at the images of falling bodies from planes, mothers handing babies over walls, and terrified Afghans being crushed to death at checkpoints due to our precipitous withdrawal from Afghanistan. I am deeply troubled by the plight of Afghan women forced to live under the return of Taliban rule and felt great sadness when reading a story about a popular folk singer, Fawad Andarabi, being dragged from his home and shot by the Taliban,” writes Ondrasik on his website.

“Though I believe the decision to withdraw or not from Afghanistan has good arguments on both sides, I cannot comprehend why the Biden administration would not extend the August 31 deadline thus leaving American citizens, SIV holders, and Afghan allies behind to a terrorist Taliban regime. As a life-long supporter of our military I believe ‘no man left behind’ applied to all Americans as well as those we promise to protect,” he adds.

“There is a great tradition of artists speaking their minds and calling out their leaders for answers. Many of those have been inspirations to me. I understand that this song might be perceived by some as a political attack, but those who follow me know I am an American with a history of calling out both sides. If Donald Trump were President and he put us in the same situation, the song would remain the same, only the names would change,” concludes the musician.

Watch the lyric video for ‘Blood on My Hands’ above.

Read the full interview at the National Review.

ABANDONED in AFGHANISTAN: US Embassy Posts Dire Message, ‘Don’t Rely on the US Government’

The US Embassy in Afghanistan posted a dire message on its official webpage Tuesday, saying the office has “suspended operations” and Americans can no longer rely on “United States government assistance.”

“The U.S. Embassy in Kabul suspended operations on August 31, 2021.  While the U.S. government has withdrawn its personnel from Kabul, we will continue to assist U.S. citizens and their families in Afghanistan from Doha, Qatar,” states the memo.

“The Embassy will continue to provide information via the Smart Traveler Enrollment Program (STEP), the Embassy web page, Travel.State.Gov, and Facebook and Twitter.  Consular services remain available outside Afghanistan.  To locate the nearest U.S. Embassy or Consulate click here,” adds the warning.

“Make contingency plans to leave when it is safe to do so that do not rely on U.S. government assistance,” warns the message.

Latest security alert on US Embassy In Afghanistan website: “Make contingency plans to leave when it is safe to do so that do not rely on U.S. government assistance.” pic.twitter.com/d2DujvpSZ2

Read the full memo below:

The U.S. Embassy in Kabul suspended operations on August 31, 2021.  While the U.S. government has withdrawn its personnel from Kabul, we will continue to assist U.S. citizens and their families in Afghanistan from Doha, Qatar.

The Embassy will continue to provide information via the Smart Traveler Enrollment Program (STEP), the Embassy web page, Travel.State.Gov, and Facebook and Twitter.  Consular services remain available outside Afghanistan.  To locate the nearest U.S. Embassy or Consulate click here.

The Department of State has no higher priority than the safety and security of U.S. citizens overseas.  U.S. citizens still in country should:

to receive security updates and ensure you can be located in an emergency.

Resources for U.S. citizens in Afghanistan:

posted by Hannity Staff – 2 hours ago

Joe Biden is set to deliver his first address as President of the United States to the United Nations General Assembly Tuesday amid a series of international crises in Afghanistan, the US-Mexico border, China, and the COVID-19 pandemic.

“His familiar refrain that the world must choose between democracy and autocracy looks different now that the Taliban are once again in control of Kabul, reversing many of the democratic gains of the past 20 years. Covid is resurging in much of the world. And the French just recalled their ambassador in outrage — not just over losing a $60 billion-plus submarine contract, but because it was made clear they are not in the inner circle of allies,” reports the New York Times.

“He will make absolutely clear he is not looking to pursue a future — a new Cold War with any country in the world,’’ Jen Psaki, his press secretary, told reporters on Monday. “And in between a one-day blitz through New York, he is trying to reach President Emmanuel Macron of France, to reaffirm our commitment to working with one of our oldest and closely partners,’’ she added.

Biden arrived in New York City Monday evening and is expected to deliver his address at 3PM Tuesday afternoon.

WATCH: AOC Rants About ‘Crumbs’, Screams She’s ‘From the Bronx!’

McENANY to HANNITY: I’m Worried, Brian Stelter Has ‘Fatal Attraction’ Vibes For You