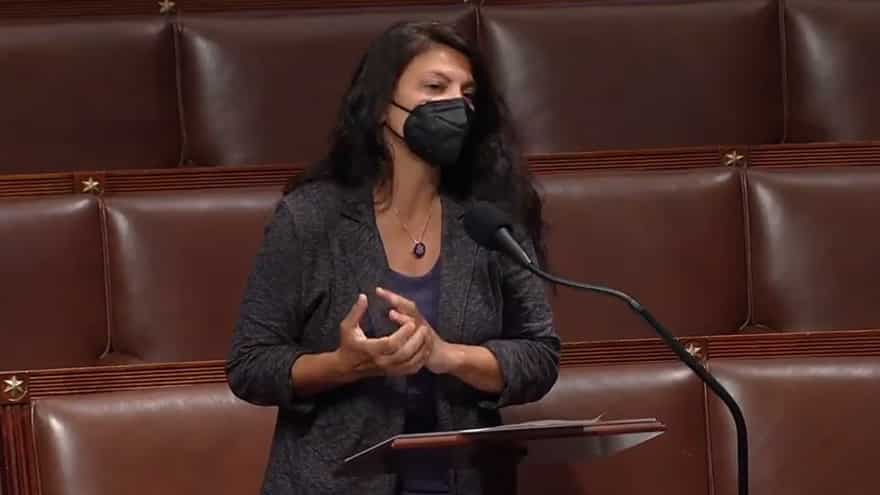 Controversial Congresswoman Rashida Tlaib set her sights on members of the US Customs and Border Patrol Agency Wednesday; describing their efforts to prevent illegal immigrants from entering the country “disgusting” and “out-of-control.”

“What we all witnessed in Del Rio, Texas was disgusting not just because of the rogue, out-of-control CBP, but also because the actions were a blatant betrayal of our human rights values,” said Tlaib.

.@RepRashida: “What we all witnessed in Del Rio, Texas was disgusting not just because of the rogue, out-of-control CBP, but also because the actions were a blatant betrayal of our human rights values.” https://t.co/AhXu2zNdvx pic.twitter.com/TMJ8zNReCH

A new report from the Associated Press claims thousands of Haitian migrants camped along the US-Mexico border in Del Rio, Texas are being released into the United States on a “very large scale.”

The administration originally told the press the refugees would be sent back to their home country earlier this week.

“Many Haitian migrants camped in a small Texas border town are being released in the United States, two U.S. officials said, undercutting the Biden administration’s public statements that the thousands in the camp faced immediate expulsion,” reports the Associated Press.

Many Haitian migrants camped in the Texas border town of Del Rio are being released in the U.S., two federal officials tell AP. https://t.co/9f9z8kAt3m

“Many have been released with notices to appear at an immigration office within 60 days, an outcome that requires less processing time from Border Patrol agents than ordering an appearance in immigration court and points to the speed at which authorities are moving, the official said,” adds the AP.

Vice President Kamala Harris emerged this week to comment on the unfolding humanitarian disaster at the US-Mexico border, saying she’s “deeply troubled” about the treatment of Haitians in Texas.

“What I saw depicted, those individuals on horseback treating human beings the way they were was horrible,” Harris told reporters

“I fully support what is happening right now, which is a thorough investigation into what is going on there. But human beings should never be treated that way, and I’m deeply troubled about it,” she said.

The VP finds her issue with the border… https://t.co/gUmfRxDOp7

“I mean, talk about a country that has just experienced so much tragedy,” Harris said. “And we really have to do a lot more to recognize that, as a member of the western hemisphere, we’ve got to support some very basic needs that the people of Haiti have to get back up and to do what folks naturally want to do, be them from Haiti or in the countries in Central America. People want to stay home. They don’t want to leave home. But they leave when they can not satisfy their basic needs.”

“DHS does not tolerate the abuse of migrants in our custody and we take these allegations very seriously,” the department said in a statement on Twitter. “We are committed to processing migrants in a safe, orderly, and humane way. We can and must do this in a way that ensures the safety and dignity of migrants.”

Controversial Congresswoman Alexandria Ocasio-Cortez doubled-down on her vitriolic rhetoric regarding the Middle East peace process in a recent interview; saying she absolutely agrees with the host’s criticism of the “criminal” Israeli government and other “White Supremacist Jews.”

“There’s a lot of young Jewish people that I know that are absolutely against the occupation and I wanted you, because often on this program, we have the freedom to address the fact that something that you know people, it’s an oxymoron, how do you have white supremacist Jews? How do you have people like Stephen Miller? How do you have these individuals who are legit aligning with racism and white supremacy, but they’re Jewish and it’s something that most people can’t wrap their brains around. But it’s a real thing and what’s going on with Israel and Palestine, while it’s very deep, it is very, very criminal. It is very, very unjust,” said ‘EBRO in the morning.’

“Absolutely, and I think to where we’re at as a country when it comes to Israel-Palestine is very much a generational thing. I think that when we start looking at it through that lens, a lot of this stuff starts to make sense. It’s like what you’re talking about, young Jews in Israel are sick of this,” said Ocasio-Cortez.

President Trump called-out ‘The Squad’ on social media earlier this month; blasting the four freshman Congresswomen as “racist troublemakers” and “not very smart.”

“The ‘Squad’ is a very Racist group of troublemakers who are young, inexperienced, and not very smart. They are pulling the once great Democrat Party far left, and were against humanitarian aid at the Border…And are now against ICE and Homeland Security. So bad for our Country!” posted the President on Twitter.

‘The Squad’ consists of Representatives Ocasio-Cortez, Omar, Tlaib, and Pressley.

Rashida Tlaib sounded the alarm on President Trump’s tax cuts Monday; pledging to repeal the legislation and give the money “back to the people that earned it.”

“Recently, I introduced the Boost Act. This legislation completely repeals the GOP Tax Scam… Do you know what I did with that money? What I said? We’re going to go ahead and put it in the pockets of every day Americans… We give it back to the people that earned it,” said Tlaib.

“Hard to watch Rep. Scalise demand that Rep. @IlhanMN be removed from House Foreign Affairs w/o wondering if it’s steeped in Islamophobia. Ilhan is more than capable of sitting on the committee & making decisions that are in the best interests of her constituents & all Americans,” posted Tlaib on social media.

Hard to watch Rep. Scalise demand that Rep. @IlhanMN be removed from House Foreign Affairs w/o wondering if it’s steeped in Islamophobia. Ilhan is more than capable of sitting on the committee & making decisions that are in the best interests of her constituents & all Americans. https://t.co/MqzPM1G2FJ

Omar made national headlines earlier this year after she accused “evil” Israel of “hypnotizing” the world and flat-out refused to condemn Venezuela’s socialist dictator Nicolas Maduro.