The House-passed pro-abortion Women’s Health Protection Act offers a caveat for its use of the terms “woman” and “women” in the legislation, asserting access to abortion is “critical to the health of every person capable of becoming pregnant,” including “cisgender women, transgender men, non-binary individuals, those who identify with a different gender, and others.”

On Friday, the House passed the White House-backed bill, which prevents both the federal government and state governments from enacting or enforcing “any law, rule, regulation, standard, or other provision having the force and effect of law that conflicts with any provision” of the act. It passed 218-211, with all Republicans and one Democrat voting against.

“The constitutional rights of women are essential to the health, safety, and progress of our nation,” the White House said in a statement in support of the measure.

“Our daughters and granddaughters deserve the same rights that their mothers and grandmothers fought for and won—and that a clear majority of the American people support. We will not allow this country to go backwards on women’s equality,” it added. 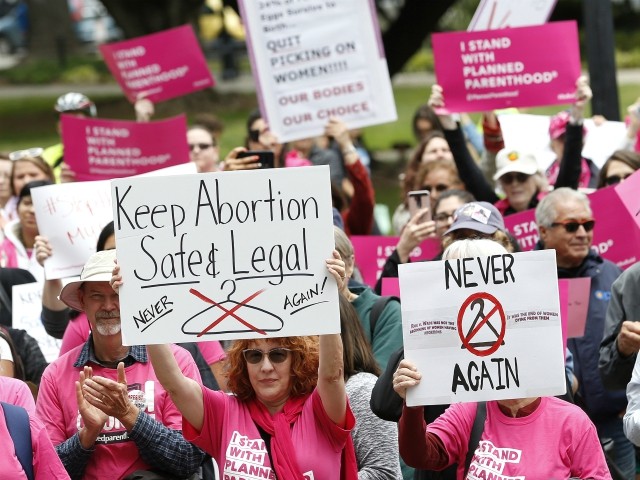 The bill pays homage to the radical left’s determination to erase the fundamental concept of biological sex, offering a paragraph devoted to explaining its use of the words “woman” and “women.” The bill states that abortions are “critical to the health of every person capable of becoming pregnant.” Biologically, only females can become pregnant. However, the bill adds that it is “intended to protect all people with the capacity for pregnancy,” including “transgender men, non-binary individuals, those who identify with a different gender, and others.”

Additionally, the bill deems “abortion-specific restrictions” as a “tool of gender oppression, as they target health care services that are used primarily by women.”

“These paternalistic restrictions rely on and reinforce harmful stereotypes about gender roles, women’s decision making, and women’s need for protection instead of support, undermining their ability to control their own lives and well-being,” it states.

“These restrictions harm the basic autonomy, dignity, and equality of women, and their ability to participate in the social and economic life of the Nation,” it adds.

This is far from the first time Democrat politicians have moved to satisfy the far-left LGBT activists. In January, House Speaker Nancy Pelosi (D-CA) and Rules Committee chairman James McGovern (D-MA) unveiled the rules for the 117th Congress, removing basic gendered terms in favor of a more “inclusive” approach:

Notably, over the summer, the Biden administration’s 2022 fiscal year budget request used the phrase “birthing people” instead of “mothers.”
You Might Like