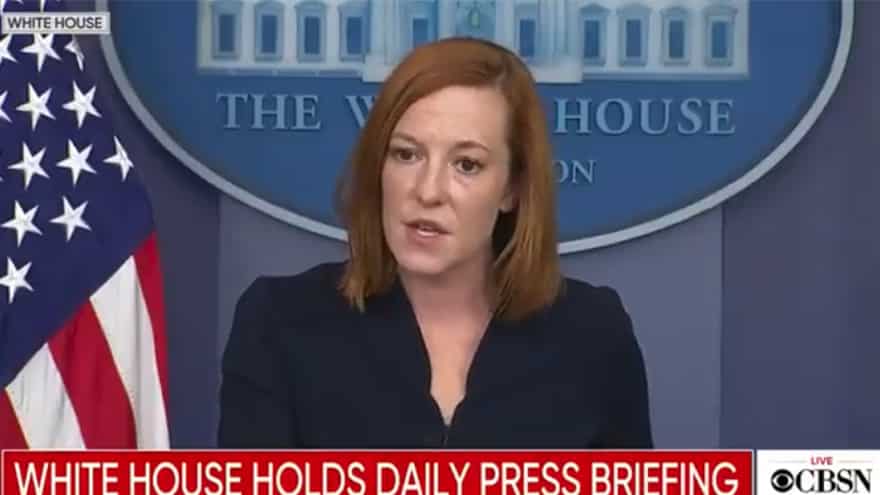 “What specific root causes is the Vice President currently addressing?” asked one reporter.

“There are a lot of Republicans out there giving speeches about how outraged they are about the situation at the border. Not many who are putting forward solutions or steps that we could take,” claimed Psaki.

PSAKI “There are a lot of Republicans out there giving speeches about how outraged they are about the situation at the border. Not many who are putting forward solutions or steps that we could take”

Maybe step one could be to continue building THE WALL Joe halted construction of pic.twitter.com/fitkNOxAnI

posted by Hannity Staff – 2 days ago

Vice President Kamala Harris emerged this week to comment on the unfolding humanitarian disaster at the US-Mexico border, saying she’s “deeply troubled” about the treatment of Haitians in Texas.

“What I saw depicted, those individuals on horseback treating human beings the way they were was horrible,” Harris told reporters

“I fully support what is happening right now, which is a thorough investigation into what is going on there. But human beings should never be treated that way, and I’m deeply troubled about it,” she said.

The VP finds her issue with the border… https://t.co/gUmfRxDOp7

“I mean, talk about a country that has just experienced so much tragedy,” Harris said. “And we really have to do a lot more to recognize that, as a member of the western hemisphere, we’ve got to support some very basic needs that the people of Haiti have to get back up and to do what folks naturally want to do, be them from Haiti or in the countries in Central America. People want to stay home. They don’t want to leave home. But they leave when they can not satisfy their basic needs.”

“DHS does not tolerate the abuse of migrants in our custody and we take these allegations very seriously,” the department said in a statement on Twitter. “We are committed to processing migrants in a safe, orderly, and humane way. We can and must do this in a way that ensures the safety and dignity of migrants.”

posted by Hannity Staff – 11 hours ago

The United States Special Envoy to Haiti resigned Thursday over his own administration’s “inhumane” deportation policy as thousands huddle along the US-Mexico border waiting to be processed.

“Daniel Foote, a career diplomat named to his post in July, said conditions in Haiti were so bad that U.S. officials were confined to secure compounds,” reports Reuters.

“I will not be associated with the United States’ inhumane, counterproductive decision to deport thousands of Haitian refugees and illegal immigrants,” Foote said in a letter addressed to Secretary of State Antony Blinken.

“This is a challenging moment that requires leadership. It is unfortunate that, instead of participating in a solutions-oriented policy process, Special Envoy Foote has both resigned and mischaracterized the circumstances of his resignation,” said a spokesperson for the State Dept.

A migrant and child seeking refuge in the U.S. wade through the Rio Grande from Ciudad Acuna, Mexico, toward Del Rio, Texas. More photos from the border: https://t.co/n1Px4B7e7p ? Daniel Becerril pic.twitter.com/akRtOE7jNa

“The United States has returned more than 1,400 migrants from the camp in Del Rio, Texas to Haiti – including families – and moved over 3,200 people for processing away from the encampment, U.S. Department of Homeland Security (DHS) officials said on Thursday. At its peak on Sept. 18 there were some 15,000 people there, around two-thirds of those families, the officials said,” adds the global news agency.

A GAFFE A MINUTE: Watch Doocy Press Biden on Gaffes, Biden Denies Them

TRUMP on BIDEN’S BORDER POLICY: He’s ‘Either Incompetent or Has a Screw Loose’