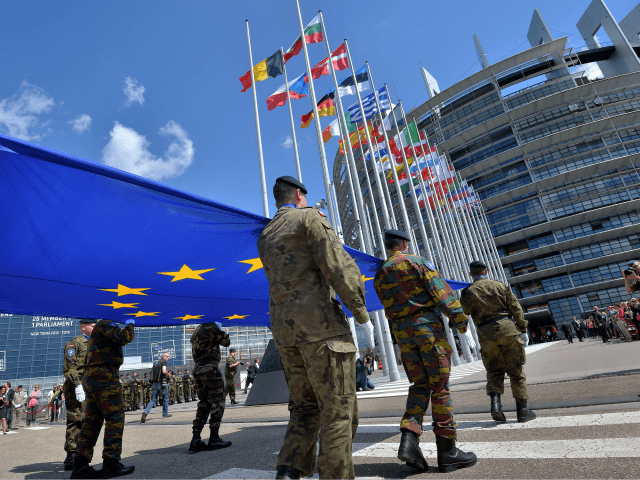 Nigel Farage has again been vindicated in his predictions that the European Union wanted its own defence force following reports that France was willing to trade its seat on the UN Security Council to Brussels in exchange for an EU army.

France is the only EU member-state with a permanent seat on the council and according to an ally of French President Emmanuel Macron, the seat could be put “at the disposal of the European Union” if the remaining 26 national governments back the Frenchman’s plans for closer military integration in the bloc.

U.S. President Biden’s disastrous withdrawal from Afghanistan and France’s claim it was unfairly treated over the formation of AUKUS anglophone Indo-Pacific defence and security union has given Euro super-statists fresh impetus to push for an EU army, a matter than NATO chief Jens Stoltenberg warned earlier this month could “divide Europe” and weaken the transatlantic alliance.

Nigel Farage long-warned while serving as a Member of the European Parliament that the bloc wanted its own army, saying on GB News on Wednesday night that he has again been proven right on the issue.

Speaking on his evening programme Farage, the Brexit leader said: “What was clear to me in my very early days as an MEP from 1999 is that this Common Market that we joined all those years before was rapidly becoming a full state.

“It wanted its own police force, it wanted its own independent foreign policy without anyone being able to veto it within the club, and it absolutely wants its own army, airforce, and navy.

“Whenever I tried to make that argument, I was shouted down. I was treated as being some sort of liar. It’s as if the Remainers in this country just didn’t want to have the debate.”

The European Union needs to build the “political will” to craft an army of its own, President Ursula von der Leyen said in her State of the Union speech on Wednesday. https://t.co/hshrYVIdOV

Mr Farage was referring to the 2014 remarks made by then-Deputy Prime Minister Nick Clegg when he called predictions that the EU wanted its own military forces a “dangerous fantasy” — two words often quoted by the Brexiteer every time the EU advances in that direction, and in vindication that the country was right to vote to leave the European Union.

Even after EU member-states signed an agreement backing the European Defence Fund and the Permanent Structured Cooperation process (PESCO) in November 2017, Clegg still insisted that such plans evolving eventually into an EU army were “fictional”.

But since then, European leaders have used the word “army” in the context of a European defence union, first by French President Emmanuel Macron who in November 2018 called for a “real European army” — “to protect ourselves with respect to China, Russia and even the United States of America” — and days later, German Chancellor Angela Merkel expressed her hope for “one day creating a real, true European army”.

It was not just individual national leaders who in the wake of Macron’s remarks cheered for an EU army, with the senior spokesman for the European Commission — the EU’s powerful executive branch — saying at the time that he was “delighted” the leaders of Germany and France backed the idea, saying the Commission “wants Europe to have a meaningful defence identity” — and identifying an EU army as a strategy that the bloc had long held, referenced then-Commission President Jean-Claude Juncker saying in 2015 and 2017 that he wanted a “full-fledged” EU army by 2025.

Farage then noted on Wednesday the claim that France was willing to give up its coveted seat on the UN Security Council so there can be a permanent EU representative, saying: “Since Afghanistan and since the weakening of NATO by Biden, the demand for a rapid reaction force, the demand for a European army, has become ever stronger.”

Raider X May Be the Fastest Helicopter Ever

Should America Fight A War With China Over Taiwan? Hell No.