WATCH: Biden Claims 97-98% of Americans Must Be Vaccinated Before We ‘Get Back to Normal’ 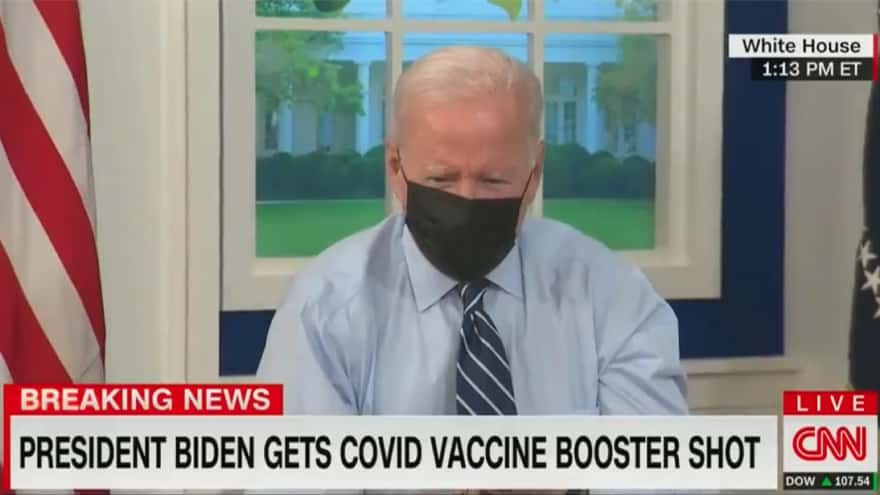 Joe Biden seemingly rebuked his own administration’s claims about the COVID vaccine while receiving the booster shot Monday; stating upwards of 98% of the population must be inoculated before we “get back to normal.”

“How many need to be vaccinated for us to get back to normal?” asked one journalist at the White House. “What is the percentage of total vaccinations that have to be deployed?”

“I think we get the vast majority like what’s going on in some industries and some schools. 97, 98%… I think we’re getting awful close, but I’m not a scientist,” said the President. A quarter of the country can’t go unvaccinated.”

REPORTER: How many Americans need to be vaccinated before getting back to normal?

According to the union, 20% of all State Police Employees are not vaccinated, but must obtain the injections by October 17th or risk losing their positions.

The group released the following statement to CBS Boston.

Throughout COVID, we have been on the front lines protecting the citizens of Massachusetts and beyond. Simply put, all we are asking for are the same basic accommodations that countless other departments have provided to their first responders, and to treat a COVID related illness as a line of duty injury.

To date, dozens of troopers have already submitted their resignation paperwork, some of whom plan to return to other departments offering reasonable alternatives such as mask wearing and regular testing.  The State Police are already critically short staffed and acknowledged this by the unprecedented moves which took troopers from specialty units that investigate homicides, terrorism, computer crimes, arsons, gangs, narcotics, and human trafficking, and returned them to uniformed patrol.

NO BLINKEN CLUE: Sec of State Dodges on Whether US Equipment in Afghanistan Will Be Destroyed

SUICIDE SQUAD: AOC Won’t Commit to Supporting Joe in 2024, ‘We’ll Cross That Bridge When We Get to It’