BIDEN: ‘Were Going to Have Well Over a Billion One Hundred Million Shots’ 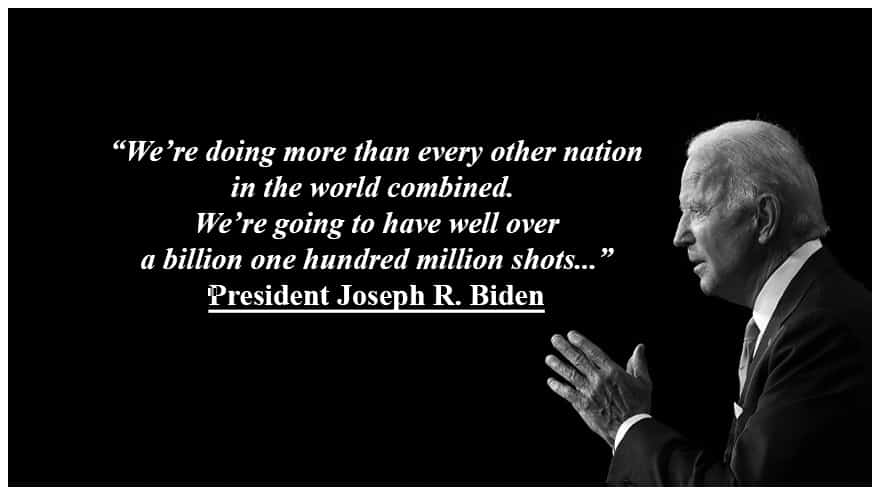 Joe Biden continued to confuse Americans on his nation’s response to COVID-19 this week when he asserted that the USA will soon have “over a billion one hundred million shots.”

“What do you say to leaders saying wealthy nations should do more to help countries get vaccinations before giving boosters here in America?” asked one reporter at the White House.

“We’re doing more than every other nation in the world combined. We’re going to have well over a billion one-hundred million shots are going to continue going,” said the President.

Biden seemingly rebuked his own administration’s claims about the COVID vaccine while receiving the booster shot Monday; stating upwards of 98% of the population must be inoculated before we “get back to normal.”

“How many need to be vaccinated for us to get back to normal?” asked one journalist at the White House. “What is the percentage of total vaccinations that have to be deployed?”

“I think we get the vast majority like what’s going on in some industries and some schools. 97, 98%… I think we’re getting awful close, but I’m not a scientist,” said the President. A quarter of the country can’t go unvaccinated.”

‘GLORY TO GOD, CREDIT TO TRUMP’: Boebert Reacts to SCOTUS Wins, ‘A Wonderful Week for Conservatives’

‘WE APPRECIATE YOU’: DeSantis Greenlights $800M to Raise Minimum Salaries for Teachers