WATCH: Hannity and Ingraham Do Their Best Biden Impersonations 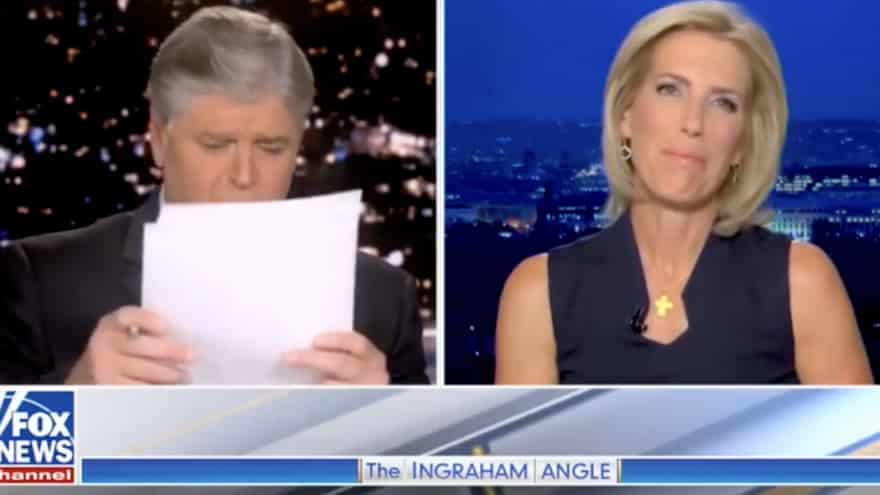 For comparison, Biden delivered a rambling 7-minute address last week on his failing domestic and foreign policy agenda; claiming he “inherited” a series of problems from the Trump administration.

“We’ve seen the withdrawal from Afghanistan, threats of a government shutdown, members of your own party are still divided over your agenda. What do you say to Americans who say you haven’t delivered on your promises?” asked one reporter.

“Take a look at what I inherited when I came into office!” deflected Biden. “I can go down the list… Let’s talk about my economic plan. The economic plan, every element is overwhelmingly popular. The problem is not everyone knows what’s in that plan.”

“Trillionaires and billionaires are doing very, very well… You all know it,” stated the Commander-in-Chief.

He babbles for 7 minutes about how he has “a plan” that is “overwhelmingly popular” & “in context” he says “it’s going to take some time” pic.twitter.com/uepWoPbvcK

Watch Hannity and Ingraham above.

Former Vice President Joe Biden continued his gaffe-filled campaign campaign during Tuesday night’s Democratic Debate in South Carolina; telling the audience roughly 45% of the US population has been killed by gun violence since 2007.

“150 million people have been killed since 2007 when Bernie voted to exempt gun manufacturers from liabilities. More than all the wars -including Vietnam- from that point on. Carnage on our streets. If I’m elected, the NRA, I’m coming for you,” said Biden to applause.

Biden claims firearms have killed more than half of the U.S. population since 2007 pic.twitter.com/a679hcVbYg

The Washington Post shot-down Joe Biden’s recent claims he was “arrested” alongside the US Ambassador to the UN while attempting to visit Nelson Mandela during a trip 30 years ago.

Joe Biden has told voters at least three times that he was arrested in South Africa while trying to visit Nelson Mandela. He has also said Mandela thanked him for being arrested. There’s no evidence to back up either claim, ⁦@GlennKesslerWP⁩ reports. https://t.co/iTgKumSqUh

“As the Times noted, Biden’s memoir makes no mention of any such arrest. As far as we can tell, Biden never mentioned this arrest before; neither can we locate any news accounts of him being arrested,” adds the Post.

BIDEN in LAS VEGAS: We Need ‘New Technologies… Just Like Here in California!’

“The new technologies are capable of doing so much more. For example, there’s no reason why -at our ports- we don’t have solar capacity to be able to make sure we save a lot of energy, create a lot of new jobs for people out there, just like here in California… I mean… here in Nevada,” said Biden.

“Here in California” – Joe Biden, while in Nevada pic.twitter.com/77zMaSWynG

HAWLEY ON DURHAM BOMBSHELL: ‘This is Some Crazy Stuff —Somebody Should Go to Jail’

‘MAYBE THEY DON’T HAVE MIRRORS IN THE WHITE HOUSE’: Scalise Slams Biden for Not Owning Crises