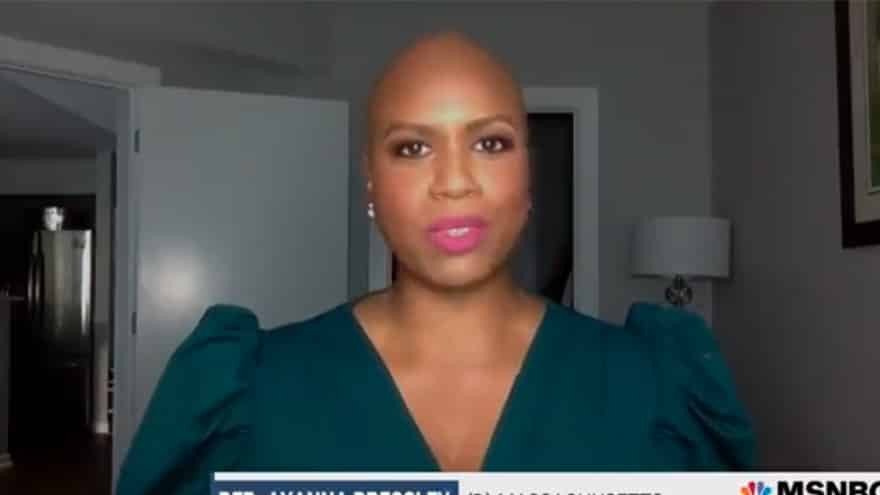 Squad-member Rep. Ayanna Pressley doubled-down on far-left demands for Joe Biden’s massive Infrastructure package; claiming “housing, child care, and paid leave” are all things that should be provided by the bill.

The Squad faced a series of political setbacks in recent days.

The House of Representatives voted Thursday to provide $1 billion in foreign aid to Israel’s ‘Iron Dome’ Missile Defense System just hours after the progressive ‘Squad’ blocked the funding as part of a larger budget proposal.

“The measure cleared the House in a bipartisan vote of 420 to 9. Eight Democrats and one Republican voted against the funding for the missile defense system. Two other Democrats — Hank Johnson of Georgia and Alexandria Ocasio-Cortez of New York — voted ‘present,’” reports CBS News.

“I will not support an effort to enable and support war crimes, human rights abuses and violence,” said Rep. Rashida Tlaib. “We cannot be talking only about Israelis need for safety at a time when Palestinians are living under a violent apartheid system.”

House passes $1B Iron Dome funding after ‘Squad’ got it cut from spending bill https://t.co/5sQbfjgY3L pic.twitter.com/UCAw7Biw85

Ocasio-Cortez, who changed her vote from no to present on Iron Dome at the last minute appears visibly upset. Appears to be crying on the House floor, in a hug with Rep. Jayapal

? BREAKING: The U.S. House of Representatives has voted overwhelmingly to replenish Israel’s Iron Dome air defense system with 420 in favor, 9 opposed, and 2 present.

Only in the warped mind of a radical, who would be thrilled with wiping Israel off the map, would support for Iron Dome (an entirely defensive system that protects innocent civilians from enemy attack) be equated with supporting war crimes, human rights abuses and violence. pic.twitter.com/wsgSHEbDkV

“I cannot allow one of my colleagues to stand on the floor of the House of Representatives and label the Jewish democratic state of Israel an apartheid state. I reject it,” fired back Democratic Congressman Ted Deutch of Florida. “Today, this caucus, this body, the House of Representatives will overwhelmingly stand with our ally, the state of Israel, in replenishing this defensive system. If you believe in human rights, if you believe in saving lives, Israeli lives and Palestinian lives, I say to my colleague who just besmirched our ally, then you will support this legislation.”

“This is criminal behavior — that’s chemical warfare so far as I’m concerned,” said Pressley. “The science deniers allowed this pandemic to rage out of control.”

“This is exactly why we should be calling for the expulsion of these members. They are unfit to serve. When they took us to the safe room, and I walked in and saw, there was this contingent of anti-maskers gathered,” she added. “Imagine the choice that I was making.”

Congresswoman Ayanna Pressley weighed-in this week on which communities should be prioritized when administering the CoVID-19 vaccine; saying minorities are hardest hit because of “transportation deserts and food apartheid systems.”

“We have to support an equitable public health response to the pandemic but also distribution of the vaccine… It needs to go to those who have been hardest hit,” said Pressley.

.@AyannaPressley: Covid disproportionately impacting black Americans because of “the comorbidities of structural racism … because of transportation deserts and food apartheid systems” pic.twitter.com/GJfRmArLUO

COMIN’ TO YOUR CITY: TX Lt. Gov Puts Blue Cities on Notice, ‘Might Be a Migrant Bus Coming Your Way’

NAIVE NANCY: ‘I Have No Intention of Losing the House in November,’ Biden a ‘Great President’