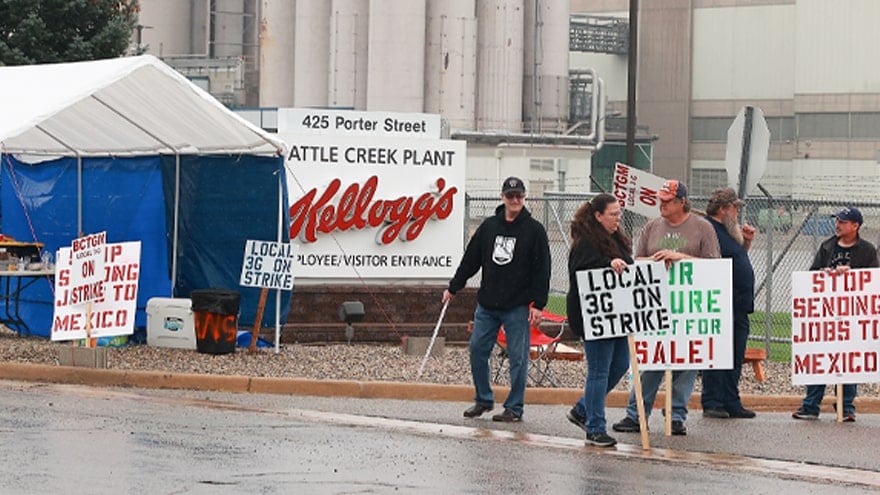 More than 100,000 workers went on strike this week amid a nationwide labor shortage, raising even more questions about America’s economic recovery under Democratic leadership.

“Striketober coming in hot. After years of being underserved and taken for granted – & doubly so during the pandemic – workers are starting to authorize strikes across the country: from @IATSE production workers to @UAW John Deere & @BCTGM Kellogg workers,& many more,” posted Alexandria Ocasio-Cortez on Twitter.

After years of being underserved and taken for granted – & doubly so during the pandemic – workers are starting to authorize strikes across the country: from @IATSE production workers to @UAW John Deere & @BCTGM Kellogg workers,& many more.

“More than 100,000 unionized employees — between Hollywood production crew members, John Deere factory workers and Kaiser Permanente nurses — have overwhelmingly voted to authorize strikes and are preparing to join the picket line unless they get stronger collective bargaining agreements,” reports The Hill.

“The wave of strikes comes at a key moment for labor groups, which have steadily lost ground in recent decades amid anti-union legislation and corporate crackdowns on organizing. But with companies now struggling to find employees, unions are finding leverage in their effort to boost front-line wages that have historically been limited due to a steady supply of applicants willing to take lower-paying jobs,” adds the outlet.

RON DeSANTIS: Some Governors Mandating ‘Shutdowns That Are Totally Unscientific’

100% KENNEDY: ‘Pretty Please, With Sugar on Top, Stand Your A** Up for the National Anthem!’