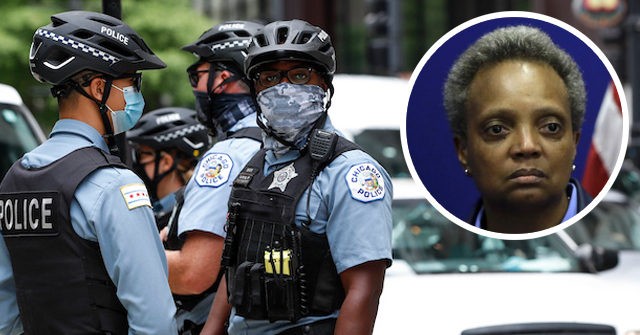 A Chicago police union boss is calling on cops to buck the Windy City’s requirement to report their coronavirus vaccination status by Friday.

On Tuesday, Fraternal Order of Police President John Catanzara threatened to take legal action against Chicago Mayor Lori Lightfoot (D) over the requirement. Under Lightfoot’s rules, officers must confirm their vaccine status or be subjected to unpaid leave. Unvaccinated officers can stay on the job if they undergo semiweekly testing.

“It’s safe to say that the city of Chicago will have a police force at 50% or less for this weekend coming up,” the police union head warned.

Catanzara remarks were first reported by the Chicago Sun-Times.

Lightfoot responded to Catanzara’s warning by accusing him of propagating misinformation, branding his remarks “untrue or patently false.”

“What we’re focused on is making sure that we maximize the opportunity to create a very safe workplace,” the mayor said, according to the Associated Press. “The data is very clear. It is unfortunate that the FOP leadership has chosen to put out a counter-narrative. But the fact of the matter is, if you are not vaccinated, you are playing with your life, the life of your family, the life of your colleagues and members of the public.”

This evening, President John Catanzara addressed our @FOP7Chicago membership and spoke about the mayor’s vaccination mandate.

*** Take a deep breath, nothing has changed for our members.***

Click the link below to hear directly from President Catanzara:https://t.co/ZVWZK1Xv2e pic.twitter.com/514rcT6c5E

Chicago Alderman Anthony Napolitano recently joined five other local lawmakers urging Lightfoot to back down from the mandate, describing it as an “infringement on our constitutional rights,” while warning that a potential shortage in officers could create an even more dangerous reality for the city.

“If you remove even more police from that equation, our streets are gonna be completely lost. … You’re gonna have cars not manned. There’s gonna be no officers in cars. … You’ll get in your car and you’ll have 20 or 30 jobs waiting for you,” Napolitano said Wednesday. “Criminals know this stuff. they know what’s going on. You’re gonna see pure melee.”