Steel, a Republican from Orange County, introduced the SHIP Act, which would ban cargo vessels from idling or anchoring 24 nautical miles off Orange County’s coastline. If the legislation was adopted, the ban would immediately take effect up to 180 days or until President Biden announces the freight container crisis has ended.

Ships anchored for weeks and months off our coast likely caused last week’s oil spill. Reports show that the pipe “may have been struck several other times” by ship anchors off the coast.

“Cargo ships idling for months off the Orange County coastline have become an environmental and public health crisis. It’s time to get the ports working again and get these ships moving and out of our waters,” Steel claimed in a press release. “This crisis could have been prevented and it’s important that we protect our waters and coastline.”

But disallowing vessels to idle or anchor off the coast of Los Angeles and Long Beach ports, which intake 40 percent of the container freight in to the U.S. every year, would further disrupt the supply chain, professor of Marine Transportation at Cal State’s Maritime Academy in Vallejo Steven D. Browne believes.

Browne said such an inconvenience would cost the ship owners more money on fuel while emitting more exhaust into the atmosphere. “In good weather this would probably not be a significant issue, though the ships would likely be burning more fuel and emitting more exhaust gases when operating offshore than they would if they were at anchor,” Browne said.

In an aerial view, container ships are anchored by the ports of Long Beach and Los Angeles as they wait to offload on September 20, 2021 near Los Angeles, California. (Photo by Mario Tama/Getty Images)

“In rough weather, the ships would most likely need to increase speed in order to ride the waves better and to avoid drifting significant distances from the ports,” Browne continued.

According to gcaptain.com, Los Angeles and Long Beach ports greatly depend on the federally designated parking spots for an efficient supply chain. “Banning ships from anchoring and idling would mark a fundamental shift in the way these ports handle inbound ships carrying just about everything.”

Professor Browne noted the ship’s parking spots are highly regulated with certain lanes of traffic to which ships must adhere.

“There is no traffic system further off the coast,” he said. “It might be a bit chaotic as ships choose whatever location their captains deem best. As a result, there could still be significant congestion issues, but in less regulated areas.”

Browne also explained such a ban may not prevent the next oil spill. It is still unknown what caused the spill near Huntington Beach on October 3. “It is hard to know if a ban such as this would have prevented the oil spill because we don’t yet know the details of what caused it,” he said. 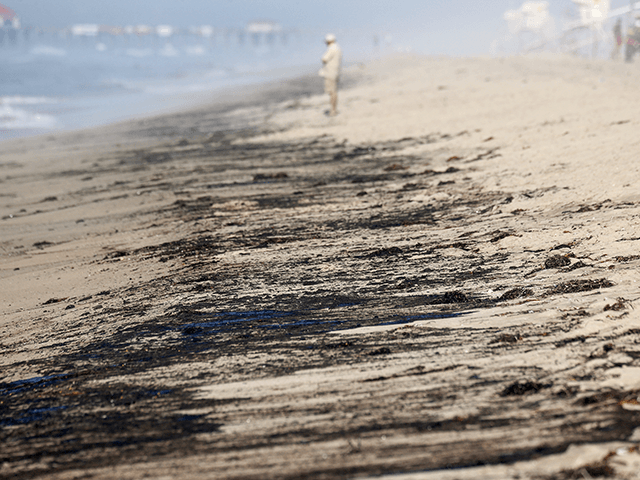 A person stands near oil washed up on Huntington State Beach after a 126,000-gallon oil spill from an offshore oil platform on October 3, 2021 in Huntington Beach, California. The spill forced the closure of the popular Great Pacific Airshow with authorities urging people to avoid beaches in the vicinity. (Photo by Mario Tama/Getty Images)

On Tuesday CEO of Freight Right Global Logistics Robert Khachatryan told Breitbart News there were some 62 vessels waiting to unload cargo at the Los Angeles and Long Beach ports. “The number has been consistently over 50 vessels for weeks and has gone up to as high as 90,” Khachatryan said.

The ships have not been able to unload the containers because the ports are already full due to truck driver and warehouse shortages. The supply chain crisis has reportedly caused transit time for container ships to increase four to six weeks.

“When the vessels reach America, the ships are often waiting two weeks to unload before they turn around and travel back to Asia,” Khachatryan said. “The two-week delay is causing the ships to miss their next load in Asia, further exasperating the delays.”

The Biden-Harris administration attempted to resolve the problem Wednesday by blaming the private sector for not performing well under during the crisis that has taken effect during Biden’s presidency.

“It is up to the terminal operators to actually open up those hours and book the cargo movements in the off hours, so labor has pledged that they will be there. We know that they’re committed to doing this,” a White House official told the Financial Times. “The supply chain is essentially in the hands of the private sector so we need the private sector to step up to help solve these problems.

Sydney Begins Easing Lockdown After 106 Days of 'Blood, Sweat, and No Beers'