Marine Le Pen Says She Will TEAR Down Wind Turbines, Scrap Subsidies for “Renewables” and Focus on Nuclear Energy if Elected President of France

Marine Le Pen says she will TEAR DOWN wind turbines, scrap subsidies for renewables and focus on nuclear energy if elected president

By Reuters and Charlotte Mitchell For Mailonline


France’s far-right presidential candidate Marine Le Pen has said that she will tear down the country’s wind turbine, end all subsidies for renewable energy, and focus on nuclear energy if elected president.

‘Wind and solar, these energies are not renewable, they are intermittent. If I am elected, I will put a stop to all construction of new wind parks and I will launch a big project to dismantle them,’ Le Pen, who will be the candidate of the Rassemblement National party in the April vote, said on RTL radio.

She added that she would scrap the subsidies for wind and solar, which she said added up to six or seven billion euros per year and put a heavy burden on consumers’ power bills.

Le Pen made it to the second round of the 2017 election, and is expected to do so again, although some recent polls have shown that right-wing talk-show star Eric Zemmour could best her if he decides to run.

Marine Le Pen (right) made it to the second round of the 2017 election, and is expected to do so again [File photo]

In a 2030 roadmap for the French economy presented this week, Macron proposed billions of euros of support for electric vehicles, the nuclear industry and green hydrogen – produced with nuclear – but made little mention of renewable energy.

France produces about 75 per cent of its power in nuclear plants, which means its electricity output has among the lowest carbon emissions per capita of any developed country.

However, it also lags far behind Germany and other European nations in wind and solar investment.

There is an active anti-wind movement, which is supported by the far right and centre right, notably by Xavier Bertrand, the leading conservative contender in the presidential vote.

France is leading a group of ten EU countries pushing for nuclear energy to be labelled ‘green’ as the continent tries to end its dependence on fossil fuels without wrecking the economy.

The group – which includes Poland, Hungary and Finland – argue that nuclear is ‘essential’ to lowering energy costs and ending Europe’s reliance on foreign imports, while also cutting emissions without becoming over-reliant on renewables.

But they are being opposed by another group led by Germany, which gets around 75 per cent of its energy from fossil fuels and stands to benefit from the new Nord Stream 2 gas pipeline from Russia – who argue that it is unsafe. 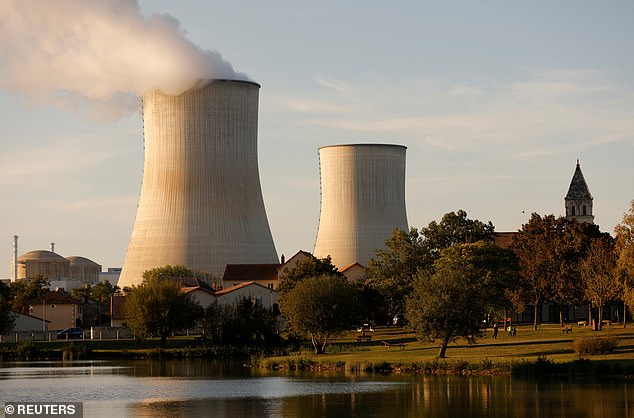 France produces about 75 per cent of its power in nuclear plants, which means its electricity output has among the lowest carbon emissions per capita of any developed country. Pictured: A nuclear power station in Civaux, France

Pointing to the 1986 Chernobyl disaster and 2011 Fukushima meltdown, the nuclear opponents – backed by some environmental campaigners – say the technology cannot be trusted and that plants produce waste which is difficult to dispose of.

The debate comes amid a global energy crisis that has seen supplies of traditional fossil fuels such as coal and gas run low – causing prices to soar while countries including China and Lebanon suffer blackouts and rationing.

Europe’s energy supply has shot to the top of news agendas in recent weeks, prompted by the severe gas shortage.

The shortage – caused by low production last year during Covid shutdowns and a spike in demand this year as they eased – has caused prices to shoot up amid warnings of blackouts.

European leaders have been forced to turn to Russia, which has the world’s largest gas reserves, for a top-up – but supplies have not been forthcoming.

That has prompted accusations that President Vladimir Putin is deliberately throttling supplies for political leverage, as his energy minister suggested that opening the Nord Stream 2 pipeline would help resolve the crisis.

The pipe – which was completed earlier this year – would bring gas into Europe via Germany, bypassing Poland and Ukraine and depriving them of revenues.

But experts say Russia’s already-existing pipes have more than enough spare capacity, and Nord Stream 2 is simply being used as a bargaining chip.

Yesterday, Putin accused European leaders of being ‘out of their minds’ as he denied withholding gas from the continent as a geopolitical ‘weapon’. 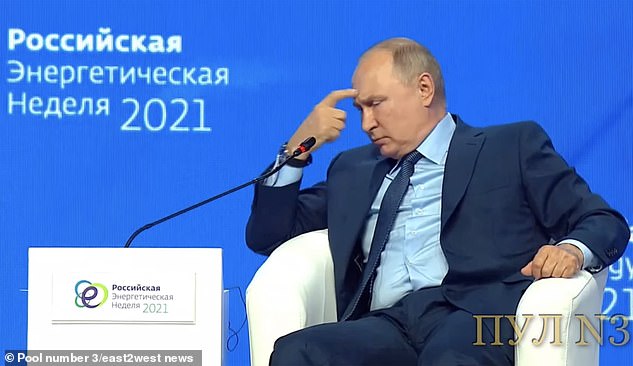 Finally: San Francisco to Require Proof of Vaccination to Poop on the Sidewalk [SATIRE!]

First Grader Wears Mask for School Photo: ‘My Mom Said to Keep It on All the Time’

ICYMI: A Family-Style US Constitution Course for Kids: ‘Parents Shouldn’t Rely on Schools to Do This’